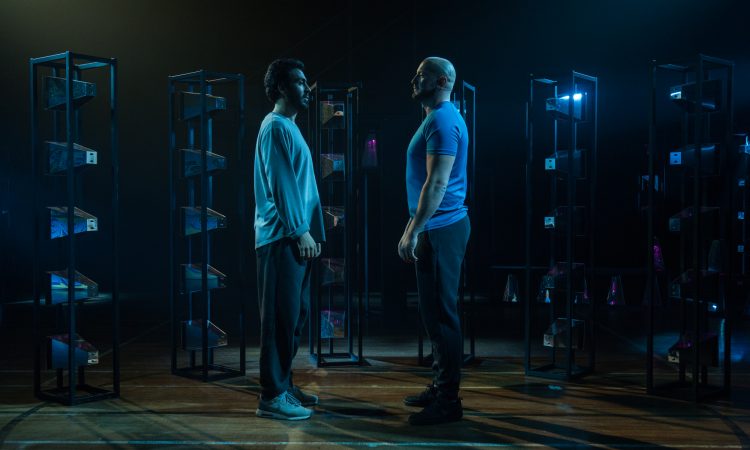 The latest production from Bradford-based COMMON WEALTH THEATRE takes an uncompromising look at the arms trade, and the impact it has on real people on opposing sides in a conflict. An unconventional staging means RICHARD HORSMAN found himself in the middle of a Palestinian techno rave – on a Bradford housing estate.

A defining feature of Common Wealth Theatre’s work is the blending of theatrical narrative with the real lived experience of participants. The lines are so blurred it feels wrong to call the performers ‘actors’. At the end of the day we all know an actor is pretending, but there’s no pretence involved when a person who is part of the production is speaking from their real, lived experience.

This three hander is also unusual in that two of the participants have never met the third.

Shatha Altowai is a Yemeni artist who participates only via video screen. She was cast, and rehearsed her part in the performance, on Skype; as a Yemeni citizen she would find it next to impossible to obtain a UK visa. Yet she brings genuine intimacy to her interactions with the two live performers – Mo’min Swaitat, a Palestinian actor, and Alexander Eley, a former British soldier.

That intimacy is facilitated by tech, and the wow factor in this theatrical experience comes from the use of tech throughout. Not only the video screen. That’s old hat.

Audience members are required to put phones in flight mode before the show for good reason. Lasers are used to great effect, as is a live DJ deck, and there’s impressive sound imaging from Jamie Grier that puts the audience at the centre of events which develop all around them in three dimensions.

But the novel and unexpected element in the production comes from 72 glowing, transparent metronomes … yes, really … which light up, flash, tick, stand in for bowls of food and even personify key individuals in our characters’ lives at different times over the course of the evening.

The press release tells me that these devices “represent the 72 Eurofighter Typhoon jets sold to Saudi Arabia this year by the UK”, but you don’t need to know that to appreciate the effect.

The narrative is actually pretty straightforward, and it will surprise no-one to learn that the production takes a hard line against the consequences of multinational companies selling weapons which, ultimately, kill and destroy the lives of people pretty much like you and me who just happen to live in the wrong place at the wrong time.

The three key narratives that intertwine are those of Alex, a British squaddie from Port Talbot in Wales, Mo’min, a Palestinian actor who grew up in the occupied territories of his homeland, and Shatha who shares stories from her experience of living in a war zone.

The show gets underway at a cracking pace as we’re introduced to the characters and the lives they’ve led.

We share the experiences of a lad from the valleys of Wales transported to a combat zone, dealing with the lethal danger of improvised explosive devices as well as the unexpected, untrained-for emotional stress of conducting house to house searches in the dark.

Mo’min gives the audience advice on how to stay alive whilst crossing an Isreali checkpoint – and where to find the best ice cream.

Slowly but surely we all become involved in the effort to get across, just as we all get involved in moving the furniture to recreate the welcome and spectacle of a feast for visitors in Shatha’s family home; the underlying message being, of course, that we’re also all involved one way or another in the death and devastation wreaked by the arms trade.

A theme throughout is techno music – a shared passion of Alex and Mo’min which gives them both relief from the memories of their different but connected experiences of life on the edge. If you’ve never been to a Palestinian techno rave, Mo’min tells us, you’ve never really lived.

At its best the production is a powerful means of making the abstract personal. The arms trade, we’re told, destroys lives indiscriminately and when we hear at first hand the harrowing experiences of people in Yemen, relayed to us by a smiling, soft-eyed woman singing a wedding lilt on a video link it’s very easy to appreciate that shared human connection.

The show opened at the TFD Centre in Holmewood on Thursday and it’s fair to say it probably needs a few more runs before the pacing is even throughout.

After a dynamic and fast-moving opening some elements felt overlong, especially the immersive segment set in that Palestinian rave. That said, to be absolutely fair, a press night audience made up largely of theatre professionals and over-age journos like your correspondent is decidedly not the crowd that bit was aimed at.

Even so, the production could be so much sharper if the run time were tightened up by fifteen or twenty minutes; a classic example of less being more.

A co-production with Northern Stage, I Have Met The Enemy will run at TFD Youth Centre in Holmewood until Saturday 5 October before transferring to Byker Community Centre, Newcastle, where the show will feature a community cast of local performers, building on a long term partnership between the city-centre theatre and the local community of Byker. The choice of venues demonstrates Common Wealth’s dedication to creating and staging site-specific theatre in working class areas.

As for the big picture message, Andrew Smith from the Campaign Against the Arms Trade believes the production is powerful and timely.

“I Have Met the Enemy is an uncompromising and ambitious piece of work that emphasises the importance of listening to people with direct experience and learning from them. he said.

“As I write this, UK-made fighter jets are flying over Yemen and dropping UK-made bombs and firing UK-made missiles. This terrible bombardment has killed thousands of people. It has destroyed schools and hospitals across Yemen and created the worst humanitarian crisis in the world. The equipment made in communities across the UK is being used in different conflicts, thousands of miles away, and thousands of miles apart.

“Works like I Have Met the Enemy can play a key role in pushing for action and inspiring change. We are proud to support this work and hope that audiences come away from it wanting to act
and calling for change.”

I Have Met The Enemy from Common Wealth Theatre continues at TFD Youth Centre in Holmewood until Saturday 5 October before transferring to Byker Community Centre, Newcastle, from 16-26 October