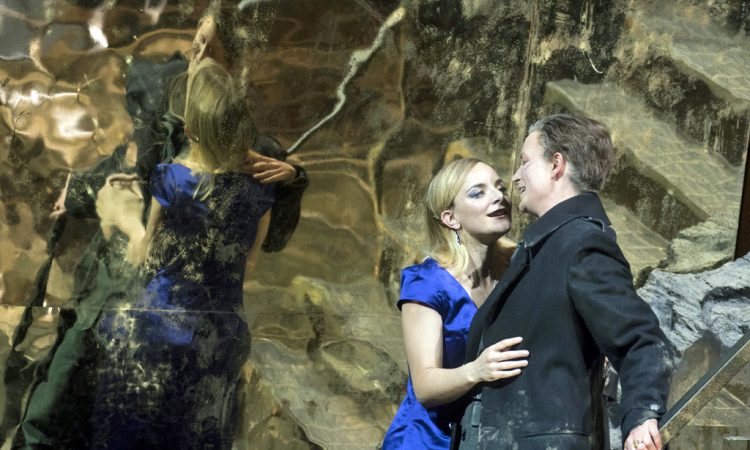 Opera North’s highly dramatic take on Handel’s colourful opera gives us one of the most gorgeous sets to grace the Grand Theatre stage and singing that is simply sublime, says CATH ANNABEL.

Wildly successful in its day (early 18th century), George Frederick Handel‘s epic operatic take of Caesar and Cleopatra is written in a style which, until more recent times, had fallen out of favour. It does take a bit of adjusting to, but once you are in the zone you get swept away by the drama, the visuals and, of course, the music.

One needn’t worry overly much about the plot, though it is the longest synopsis I’ve ever read in an Opera North programme. Giulio Cesare is about war and the spoils of war; about power and its abuse; about loyalty and vengeance.

This is a revival of Tim Albery’s mightily praised 2012 production. The set – a triumph for designer Leslie Travers – begins as an austere grey fortress (matching Cesare’s military greatcoat) which then rotates to reveal an opulent golden palace. Complemented by the costumes in these Egyptian scenes, its shimmering surfaces are opulent and deceptive; there’s even a pool to cast watery reflections on the walls.

The costumes reinforce these contrasts, every costume change informing character and plot. The Romans dress in drab military gear and Cornelia, the virtuous Roman widow, in grey; by contrast siblings Tolomeo and Cleopatra appear in matching satin robes, even donning royal blue satin play-suits for a game of incestuous semi-seduction.

To entice Cesare, Cleopatra wears a sequinned dress, whilst amongst his trappings of power Tolomeo counts a dignified (though still blue satin) jacket and trousers matched with a rather disturbing set of long talons.

The orchestra includes instruments not often heard from here – theorbo (rather like a lute), viola da gamba (an early member of the string family), harp and harpsichord, all of which would have been much more commonly used in Handel’s time, sit alongside a substantial string section, woodwind and splendidly martial horns. The harpsichord, cello and theorbo provide the continuo, a form of harmonic underpinning that is an essential feature of baroque and classical music.

In Handel’s day the title role was played by a castrato, but here it’s a trouser role for Maria Sanner making her Opera North debut. Her fine contralto is richly confident and she strides about the stage in her mud-stained army greatcoat as a conqueror should. (Cesare’s first aria proclaims the imminent Roman victory over Egypt, and includes the line ‘Caesar came, saw and conquered’, better known in its Latin version as veni, vidi, vici.)

Catherine Hopper brings dignity and passion to the role of Cornelia who, within moments of her first appearance, is presented with the body of her murdered husband. Defined by her grief and desire for revenge, as well as having to defend herself against attempted rape by both the Egyptian general and Tolomeo the King, it’s not the most rewarding role in terms of range, but Hopper imbues her desolate arias with real poignancy and beauty.

She’s ably supported by Heather Lowe as her son, Sesto, who plays him very much as a boy at the mercy of his emotions, full of fine rhetoric about revenge. (There’s a nice moment towards the end when, in the midst of one of these tirades, Cleopatra’s servant Nireno sighs with both understanding and impatience.) And when Sesto does get his chance and dispatches Tolomeo, he curls up on his mother’s lap for comfort, all his fury spent.

The aforesaid Tolomeo is played by counter-tenor James Laing as a vain and lascivious youth, but with real menace and power. He’s very much the villain of the piece. His arrogance leads him to fatally underestimate not only his sister’s political skills, but Cornelia’s resolve and powers of resistance. Equally fatally he over-estimate the loyalty of his general, Achilla. His actions towards Cornelia in particular belie his claim to languish with love for her. His face twists with fury at her refusal to comply and he makes it clear he has no intention of taking no for an answer.

But whilst Cesare gets his name in the opera’s title, it is Cleopatra who steals the show. Lucie Chartin admirably conveys Cleopatra’s seductive powers, but gives her real depth and complexity. Whilst she cynically uses her beauty to make Cesare love her, she is taken by surprise to find she reciprocates his feelings. Whether she is languidly disrobing (knowing that Cesare is watching), or armour-clad for her sword fight with Tolomeo, she mesmerises. Her arias are exquisitely beautiful, and her extraordinary voice does them full justice.

Giulio Cesare is at the Leeds Grand Theatre until 17 October, after which the production tours to Newcastle, Nottingham and Salford. Details and tickets here.