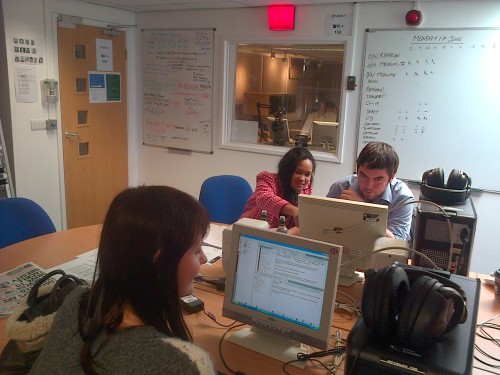 Journalist-turned-tutor Richard Horsman (@leedsjourno) looks at innovative ways in which students from Leeds’ three Universities are engaging with the wider community, and suggests they could do more.

By the time you read this my postgraduate news trainees at Leeds Trinity University will be well into the the first day of what may well be the toughest month of their lives so far.

They’ll be underway running a real time radio newsroom for Bradford Community Broadcasting. You can check out how they’re doing by watching this webcam.

The month on air with BCB has been running now for 21 years. I believe it serves as a model for what should happen a lot more in Universities and Colleges, that being proper engagement with the communities that host them in their midst.

I was fortunate in the academic year just ending to be awarded a Teaching Fellowship by my own institution. I don’t get any personal benefit from it, apart from a Hogwarts-style title which fades away like one of Hermione’s potions at the end of this month, but the Centre for Journalism was given a chunk of money which we were able to spend on another couple of radio outreach projects.

The first of these involved a tie-up with our friends at East Leeds FM. I took a group of second year Journalism students into Seacroft and let them loose finding stories, with a little help and guidance from the LS14 Trust, which were compiled into themed ‘community news’ bulletins.

As a project it wasn’t without difficulties. Half the students originally signed up for my Radio Journalism class quickly chose other modules when they realised they were expected to do more than turn up for two hours a week and do a campus-based assessment. Two rookie journos decided to go shopping in Tesco when they should have been doorstepping contacts; their tutors got there first, and we have the photos to prove it.

But of those who stuck with it, and put in the work, two are now working on a project for Stray FM in Harrogate (of which I’ll write more in due course). They’re well on their way to a broadcast career.

The second strand involved final year undergrads producing half-hour live news programmes for BCB 106.6FM in Bradford. For many of the students involved, they’d never been to Bradford in all the time they’d been studying in West Yorkshire.

Their lives revolved around the campus, the student scene of Headingley, Hyde Park or Burley, and (for many) a job to make ends meet. As trainee journalists they learned more about the real Bradford, as opposed to the media myths, in our nine weeks together than they had in three years living just a bus ride away.

The projects above are just a small illustration of something much, much bigger. There’s so much innovation and creativity going on in West Yorkshire’s academic institutions that most people never get to hear about.

It’s good to know I’m not alone in seeking to engage a wider public.

I was delighted to be invited last week, through the Culture Vulture, to see a preview of the ‘Broadcast Leeds’ art show at Leeds Met devised by Dr Rebekka Kill and her students. The programme of events they came up with involved shoppers and city centre office workers in the appreciation of fine art.

Likewise Dr Eleanor OKell and students from the Classics department at Leeds University have donned togas to bring what is often viewed as the dustiest of academic subjects alive with talks and role playing activities for Leeds Light Night – and for younger audiences in the city museum. She and colleagues have also engaged with the Leeds phenomenon that is Bettakultcha, giving frenetic five-minute PowerPoint lectures on (for example) “Justice – and her oft-forgotten sister, Good Governance”.

We are incredibly fortunate in Leeds to have so much good work going on in three fine Universities.

It’s more important now than ever, in times of austerity, that academics and their students get out of the ivory towers and share the joy that can be found in learning and creativity with the wider community. Students, teachers and everybody else stand only to gain if we can break down the last remaining barriers between town and gown.

Richard Horsman (@leedsjourno) is currently Teaching Fellow in Journalism at Leeds Trinity University, where he leads the Postgraduate Diploma in Broadcast Journalism. He’s written for The Culture Vulture and other websites including MediaUK, Journalism.co.uk and Press Gazette and holds the BBC Education Partnership ‘Achievement’ award for developing news talent in the north of England.