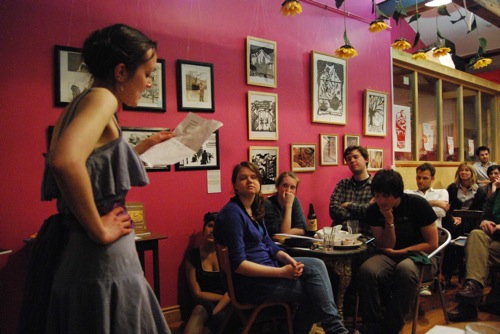 Liz: ‘It’s easy. You get on a train and four hours later, there you are in London.’

Billy: ‘The idea of being in London next Saturday put down on paper and staring me in the face, filled my bowels with quick-flushing terror.’

Keith Waterhouse’s Billy Liar agonised about whether to get the train or not and pursue his dream of writing scripts for a London comedian. But today, you can get the train if you want to, but you don’t have to.

Whilst it’s true London has a stranglehold over publishing, Leeds has more than enough going on and, in a digital age, we can build audiences like we’ve never done before. What’s more, with eReading now taking a sizable chunk of the market and the old model of distribution facing trouble, tightening its belt and not taking risks on new talent, there’s a chance for us to adapt, to develop new ways of finding readers and connecting to projects that develop writers and new models of publishing.

For young writers alone, Leeds has an enviable culture of self-organisation mixed with institutional support. Leeds Young Authors represent the UK in international poetry slams. The Cadaverine is a webzine and publishing press for writers under the age of 25. Scribe is a Leeds University based magazine open to alumni. Barefoot in the Park is an innovative and accessible festival based on Woodhouse Moore every Summer. Young Inscribe offers professional development to promising writers. Aside from energetic groups, bigger organisations like Ilkley, Morley and Headingley Festivals offer much needed credibility and support to young writers.

The NAWE Young Writers’ Hub launched last week in Leeds. We’re a news-driven resource and information directory for writers under the age of 25.  We offer an insight into the writing industry for young writers as differing ability levels, teachers, parents and anybody interested in supporting a new generation of emerging writers.

The Hub has a pot of money to award grants, a team of rolling interns, guest bloggers, profiles, listings and somebody to ask questions. We also help young writers facilitate their own events in association with the Hub. It’s the first of its kind and it’s based in Leeds. As more of our reading culture migrates online, signpost services like the Hub will only become  increasingly useful.

In David Peace’s Red Riding Quartet, a character shouts, “The North! The North! Where we do what we want.” This sounds better than quick-flushing terror. The Young Writers’ Hub won’t lecture, hector or organise, it’s a way to help the flow of what’s already going on, and it’s up to young writers to make it happen. To let them do what they want. To make the connections and see a cross-section of the industry for themselves. We don’t “empower” people or go for any goofy arts speak. We just give them the information.

So many projects have spilled online and take on new forms, new ideas. David Tait was the editor of the Scribe, now he runs his own poetry workshops in the city and has taken up a post as Poetry Editor at The Cadaverine. Similarly, those involved with the Leeds Poetry Slam like Zodwa Nyoni are writing plays for many of Leeds’s theatres and getting involved with the Hub and the open mic scene in the city. Adam Lowe is a journalist, a novelist and the editor of Dog Horn Publishing. For playwrights, scriptwriters, poets, journalists, and prose writers Leeds not only as enviable provision and outreach to cultural centres beyond, it’s well connected. This generation of young writers exist in a digital world as much as they do in the traditional literary set-up. And they don’t stay in the “ghetto” of young writers only projects, they’re ambitious and forward looking, giving new life to many of the brilliant groups operating in Leeds like Red Ladder, or West Yorkshire Playhouse.

There are too many writers to name-drop and too many projects to shout about. That’s why we need a Young Writers’ Hub and why I think Leeds is the best place for young writers in the UK.

Wes Brown is a novelist and Young Writers’ Coordinator based in Leeds.