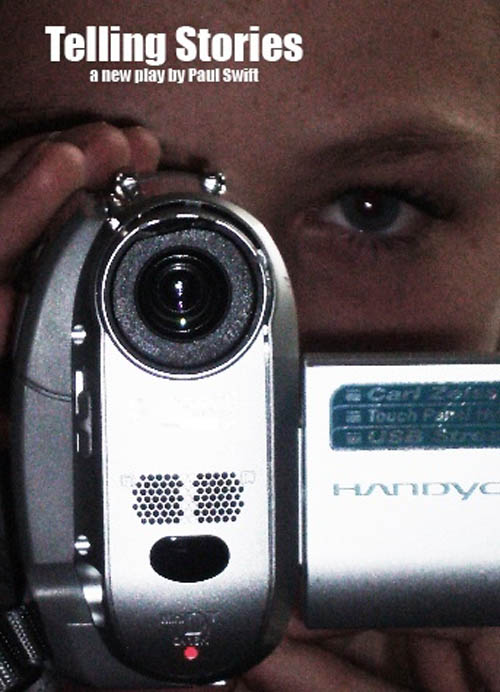 ‘Is it what you expected?’ is the question that Michael Jameson, one of the Leeds Theatre in Education Company members poses to me when I catch up with him after the preview performance of the company’s latest play ‘Telling Stories’ . It is a question I find difficult to answer…

My motivation for attending the performance is to find out more about how Leeds TiE operate. They are a company I’ve heard mentioned frequently and I know they’ve been around for a very long time but I’ve never had chance to see their work before; rather than being shown in theatres for an audience seeking entertainment, their work tours Schools and adult community groups.

So, what do I expect?

Perhaps it’s more interesting to talk about what I don’t expect.

I don’t expect to be so emotionally engaged. After all theatre in education is about teaching and learning, isn’t it? Not catharsis.

Instead of being presented with some kind of lesson, morality tale, or scientific facts I find that I’m being taken on an exploratory journey through the subject matter. I get to view the issue through the eyes of the characters in the story, I learn about their various points of view, the circumstances that inform their perception and the background to their behaviour.

The story is that of Alex, who is in foster care and is on the verge of being re-united with his mother after many years. Caroline, is a film maker who is interested in helping Alex tell his story and to communicate with his mum. Alex is invited into Caroline’s home to make a video diary. Here he meets Joe, Caroline’s 9 year old son.

We, the audience witness the recording sessions of the video diary (which feature appearances from Joe as their friendship blossoms) and the changes in Alex and his relationships with Joe and Caroline over the duration of this (far from straightforward) project.

Rather than being presented with ‘right’ or ‘wrong’ answers, I find that I’m all churned up and conflicted. I have sympathy for the central character and at the same time I’m a little bit afraid of him. There’s no easy solution to this dilemma. Life is presented as complex not a story neatly tied up with a happy ending.

Another unexpected surprise is how artistic the work is.

For me there’s something very satisfying artistically when a lad with ‘issues’ insists on a game of Jerry Springer and puts himself in the role of the guest. He’s playing out a therapeutic process, fantasising about being heard, understood, supported. He’s also enjoying the celebrity of it. This scene works for me on many levels. I’ve seen chat shows used as a device before but never with as much resonance as this.

I also really, really enjoy (and am totally convinced by) the performances of Paul Swift and Michael Jameson who age down considerably to play a 9/10 and 13 year old. I love their attention to detail which can only be the result of their being steeped in the world of children and young people.

This brings me to another element of the performance and of the work of Leeds TiE as a whole that really clicks for me; they’re so tuned in to what matters to their audience. I ask in the Q&A at the end of the performance what their research process is and I am told that Telling Stories was created following work on a previous project with young people in care at First Floor (a creative space for young people).

So, one project feeds into another. Typically their performance work provides the stimulus for workshops to discuss and work through the issues raised in the play they’ve presented. They deliver this ‘after work’ themselves and their interaction with participants deepens their own understanding of what concerns their audience. Then they can create further work based on what they’ve discovered to help their audience work through the issues they’ve identified.

Unless you’re a teacher or involved in one of the community groups that Leeds TiE engage with, it may be that you find it tricky to see their work. But if you have children of your own, or interact with the children of others and you hear reports of a play they’ve seen at School, ask a few questions. If they’ve been watching Leeds TiE I expect you’ll learn a thing or two.

If you are as interested in Leeds TiE you can find out more via their website www.leedstie.co.uk