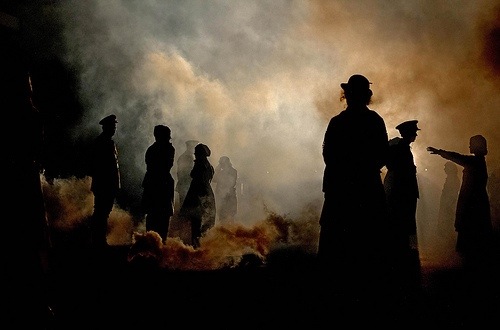 Behind the scenes insight from @ChristyRomer2

I’ve grown up surrounded by some pretty weird theatre in my life. My dad, Marcus Romer, a dentist-turned-theatre-director at Pilot Theatre, has made it his mission to “push the boundaries of what is possible in theatre”. His work ranges from conducting a play in two spaces at once, showcasing half of the performance via live feeds and half via actors on stage, to installing a 12 foot treadmill on stage for “The Loneliness of the Long Distance Runner”. And as a blood relative, I’ve always had the chance to look at the inside of some of his most ambitious productions.

Pilot Theatre’s most recent project, ‘Blood and Chocolate’, is a collaboration with Leeds-based theatre company SlungLow and the York Theatre Royal to create a ‘citywide adventure through the streets of York’. Helping the trio on their way was established playwright Mike Kenny, who recently produced the phenomenally successful stage adaptation of the Railway Children.

At some point in the last few years, Marcus stumbled across the story of the Lord Mayor of York sending out a chocolate tin to every soldier from York who was fighting at the front in World War One. After seeing SlungLow’s ‘Mapping the City’ in Hull, Marcus was convinced that, together with director Alan Lane and his team at SlungLow, he could produce a piece of work that would bring together similar tales of war-time cohesion in the real-world stage of the centre of York.

Each of Blood and Chocolate’s 300 audience members per show are kitted up with a pair of headphones and a radio receiver at the start of the performance. They then embark upon a 1 mile walk around the city, stopping periodically to witness scenes – and to listen in to even the most intimate of actor conversations through their headset. Indeed, one section of the play sees the vast group of spectators gathered outside the Castle Museum, listening in on the trench conversation of four miked-up soldiers at the top of the mount of Clifford’s Tower – 200 metres away.

However you feel about the performances in the show – which, obvious biases aside, combine to create a truly moving piece about the human stories in WW1 – it’s a stone-cold fact that ‘Blood and Chocolate’ is a masterpiece of logistical arrangements. Not only must the paying audience be safely ferried around the city on the night, but much of the city has had to be closed down and overtaken for the duration of the show’s run. Taking a more backseat role as a producer, Marcus talked me through the challenges involved in bringing the project to life.

“We needed permission to close the roads, to get the parking permits from the police, to get every single area cleared by health and safety teams – and to have this ready for every single night of the performance”, Marcus explained to me over a complementary hot chocolate (the play is supported by York Cocoa House). “Some of the performance takes place in pretty prominent architectural locations too, so we had to get permission to take over those as well.

“Access is key. Clearing streets, blocking streets, opening roads, transporting equipment… the team do it all. Every night.” He chuckled.

As a live performance moving through a large public space, Blood and Chocolate obviously requires having a large team on hand every performance to make sure that no members of the public interrupt the show or get in the way of upcoming stunts.

“Blood and Chocolate takes place in a living, breathing, student city. We’ve got to ensure that people remain immersed in the world of the play, and don’t get distracted by those that are a bit vocal on a Friday or Saturday night.” He nodded at me knowingly, insinuating that I am something other than a bookish student of prose. “But this has by far been the easiest section of the production. The teams in place have been great, and to be honest most people are just intrigued by the spectacle and want to be involved.

“I suppose that’s the most important factor in any show – having the right team and the right support mechanisms to enable the creative team to deliver their vision. We’ve definitely got that here. But above all, my thanks are owed to the dedication, commitment and passion of all the volunteers, participants and helpers, without whom, none of this would have been possible.”

And so ends my first interview with Marcus Romer – dentist, producer, father.

Blood and Chocolate is now sold out, but a live stream and a video archive will be available from the 17th October on pilot-theatre.tv. Marcus can be reached, day and night, at @MarcusRomer. SlungLow director Alan Lane can be found at @slunglowalan or @SlungLow. And the delicious hot chocolate that we enjoyed can be found at @yorkcocoahouse , courtesy of @sophiechoclady .