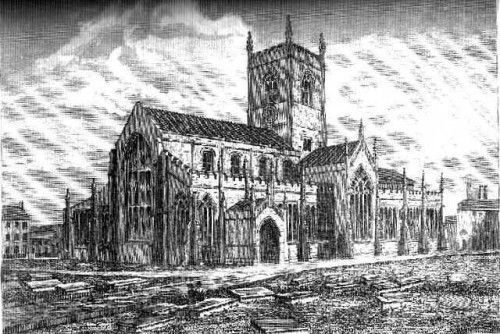 John Baron Treks over to Leeds Minster for an organ concert …

Battle of the Organs: the final frontier. These are the voyages of Leeds Minster. Its nine-year mission: to explore strange new music, to seek out new stops and new piston combinations, to boldly go where no organist has gone before.

The press release advertising Battle of the Organs at Leeds Minster promised an ‘out of this world’ experience for concert goers.

To be honest, I was sceptical. I mean, organ music is for churches, it’s stodgy, it’s old fashioned, dull and frankly some of it always seemed, dare I say it, ‘off-key’ sometimes. That’s what I thought, anyway.

As an ardent Trekkie (I have all 700-odd episodes of all the different Star Trek TV series) and sci-fi geek I was more than excited by the event’s Star Trek theme. Anyway, I resisted the temptation to dress in full Starfleet uniform and boldly went to Leeds Minster which, despite being a Leeds lad born and bred, I’d never been to before.

I was glad I’d left my phaser at home on charge as there wasn’t a Klingon or Borg in sight, although looking at some of the audience I suspected they’d just appeared in the original series episode called the Deadly Years.

I felt a bit like a landing party, coming to a strange new place and exploring the musical unknown.

The setting was breathtaking. If you’ve never been to Leeds Minster before do go – the history connected to it is absolutely fascinating and it’s a beautiful and atmospheric place.

What did surprise me was the music. It’s not my cup of Romulan ale and I don’t think it ever will be, but it was a pleasant surprise.

The Battle Of The Organs gives people the opportunity to hear the magnificent Harrison & Harrison organ alongside several Makin digital instruments.

The music wasn’t obscure, some of it was fairly modern. Some well-known themes cropped up such as Country Gardens, Oh I Do Like To Be Beside The Seaside and the theme to TV’s Songs of Praise.

The concert really started to kick on when the massive church organ, which runs from floor to ceiling and dates back centuries, kicked in. The incredibly powerful music it plays makes the floor, seats and the very building it’s in vibrate. I’m not sure if this makes any sense, but it washed right through you, both in terms of sound but also in a physical sense. The music reverberates around the church. It has to be the most powerful single instrument I’ve ever heard and it can be quite majestic.

The skill of the organists was also on show, thanks to some handily placed cameras and a big screen. The rate their hands move over all the keys, while working the organ with their feet is, as Spock would say, ‘fascinating’ to watch.

Of course, they played Alexander Courage’s famous Star Trek theme, which brought smiles to most faces, including mine. And you couldn’t help but be swept away by the power and majesty of Jerusalem, played Proms-like at the end of the concert.

The big question is: Would I go to another organ concert again after this? I enjoyed it, and the organ music grew on me as I came to appreciate the skill of the players and power of the instrument itself. It’s not my cup of tea, but the hall was packed and most people seemed to enjoy it – I’d say they went home with their phasers set to ‘stunned’.

The Battle of the Organs is promoted by The Friends of The Music of Leeds Parish Church, an organisation dedicated to securing the future of almost 200 years of choral tradition at the historic Leeds Minster. It featured the resident organists of Leeds Minster and Liverpool Cathedral and special guest Ian Tracey.