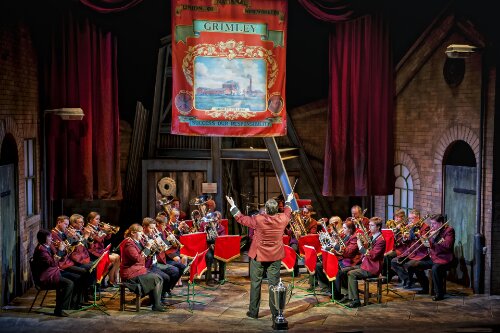 Brassed Off at York Theatre Royal revised by Darcie Hewitt-Dudding …

Brassed Off translated perfectly to the stage. Paul Allen, who adapted it from the film, added in elements to give it exactly what it needed to make it ideal.

You might think that the adaptation process from the screen to the stage is rather simple, a screenplay and a stage script are very similar aren’t they? In fact, it is difficult. The screen can portray many things in a split second, whereas a stage, a set and a cast and crew cannot. The stage cannot move and you can’t get a close up of an actor unless the audience is treading the boards with the actors.

Indeed, the nature of the beasts are different. The stageplays are often about human nature, and characters, whereas films are much more centred on story, action and spectacle.

The stage adaptation of Brassed Off took the story, gave it a slight twist and set it in front of that audience and watched it soar.

It begins with a small child of eight, Shane, played by Luke Adamson. Son of Phil and Sandra, he frames the story, narrating it for us back in 1994. The miners – and the brass band – face closure. The workers themselves have a deciding vote. Will they vote for their jobs or for a pay off? The brass band provides a sense of community and pride for the miners and their families, but the strain of poverty proves too much and fractures start to appear. 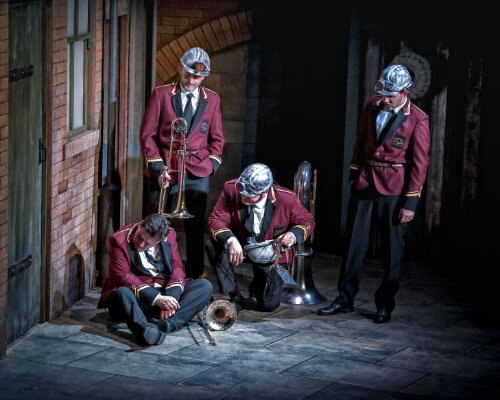 The similarities with today in an age of austerity are striking – the anti-thatcherite and anti-tory humour rings true for northerners still. With only nods to the politics of it all, the message is uplifting and human, rather than a damning tale of woe. However that’s not to say that there aren’t dark moments. Andrew Dunn’s trombonist father-of-four suicide attempt is hard to watch, a bleak insight into life without hope.
The acting is superb on every count (though some of the Yorkshire accents left a little to be desired) creating poignancy and merriment in equal bounds.

Yes, I laughed and I’ll admit to tearing up a little too.
John McArdle and Andrew Dunn played father and son believably, with humour that would make your heart ache – we all know a Yorkshire man a little afraid of showing his feelings. Long suffering wives Sandra, Vera and Rita played by Rebecca Clay, Gilly Tompkins and Helen Kay respectively, gave impressive performances too. James Robinson’s Andy and Clara Darcy’s Gloria were convincing as a young pair not quite sure of what to make of each other. In an ideal world they might have been given more time to develop, but the second act seemed to zip by in minutes.

The vital part, the music, was excellent too. From the rich, heart-soaring ensemble that was the brass band to the 90s head-bopping Brit-pop of Blur and Pulp that flickered on during changes to the set, it all added to the sense of community of a theatre audience. You could feel that everyone else was being moved by it just as you were.

Comparing the two versions would be futile, but it’s safe to say that if you loved the film then you’ll love the play. I urge you to go and see Brassed Off; your lives will be richer for it.

Brassed Off leaves the York Theatre Royal at the end of February.