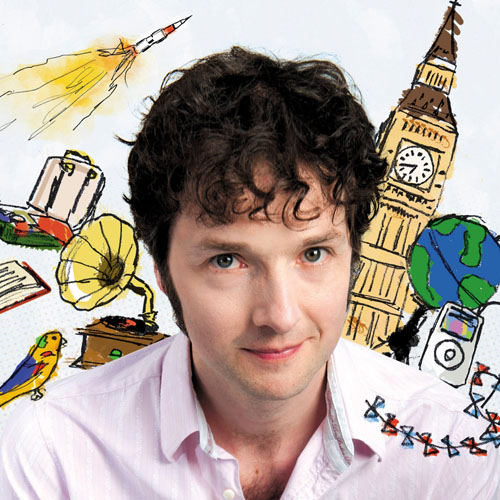 Guest blog by @MawScrawl. Often mistaken for the Milky Bar Kid, Woody is a screenwriter and the short film programmer for @miniminicine.

The guy from the insurance adverts.

No, the guy from Mock The Week.

Well, I happened to mosey on down to Leeds Town Hall recently to catch the latest leg of his The Time Is Now, Again tour. Being familiar with Addison’s previous work on The Thick Of It and the aforementioned Mock The Week, both in which he shares the spotlight within an ensemble of sorts, I was eager to see how he’d handle himself as ‘star of the show’.

Addison himself was really good, full of confidence and the aim of his set seemed simply for everyone to have an enjoyable time, which I did. He wasted no time in taking to the stage and making everyone feel at ease and involved with the show, but unfortunately the show itself was less than stellar. While I remember the night having many laugh-out-loud moments, by the time I got home I couldn’t remember what exactly I’d been laughing at, the material just wasn’t that memorable. Even now I couldn’t tell you what he covered in his routine and sadly it just seemed a bit ‘safe’ as there was little to challenge the audience.

One member of the audience had no qualms however in challenging Addison on his knowledge of kitchen appliances. Midway through the second act and a gag in which the stand up was explaining in layman’s terms how a microwave worked Comic Book Guy from The Simpsons piped up to correct him, practically quoting an instruction manual verbatim, and tell everyone in the hall just how the molecular structure of a potato changed when radiation was introduced into the something… blah… Han shot first. It was amusing. At first. But the guy wouldn’t let it go and pretty soon he had Addison forfucksaking. And then he had the audience forfucksaking too. This wasn’t the only instance of audience participation throughout the night, there was a lovely moment when a young woman recalled all the years she believed that petrol was made of dead rainbows.

Where are you going with this?

I don’t know, I can’t remember. Nowhere really, it’s just that those two instances were the highlights of the night for me yet neither really involved the man I’d gone to see.

I know, that sounds really bad doesn’t it? I still came away from the show liking Chris Addison even more than when before I went in. He’s a great personality and he’s a solid entertainer. I really wish I had something more positive to say.

Look, just forget everything I’ve said so far and I’ll leave you with this, go and see Chris Addison if you want to have an enjoyable and inoffensive night with plenty of laughs but don’t expect to be retelling any jokes in the office the next day.

If you would like to write for our comedy section on The Culture Vulture, just tweet our comedy editor @KayLinaBrown.