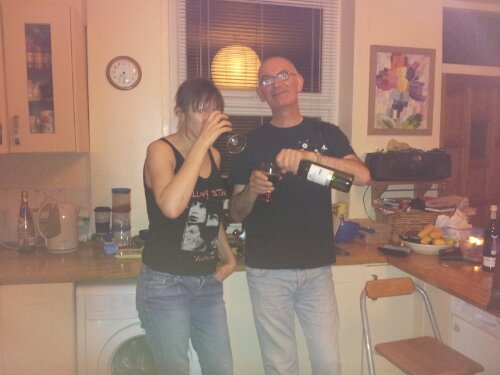 I have always been enthusiastic about wine. An enthusiast, according to Simon Hoggart’s smashing book, Life’s too short to drink bad wine (a copy’s in the office if anyone wants to borrow it), is “always on the lookout for something wonderful, and if it comes from Eastern Europe, or a part of France nobody has quite heard of, or Asda, and if it costs a decent price, he is thrilled.”

Well, I couldn’t be more thrilled. Dom Burch who works for Asda (you’ll know him from Twitter, probably – @domburch) is trying to get the word out that their Extra Special wine is just that. It’s a little bit special, and something extra to pop in the basket next time you are passing one of their stores (nudge).

He’s kindly got the bigwigs at Asda (that’s a lie btw as he didn’t actually ask permission) to sponsor ten special CV tastings of wine hosted by me – enthusiastically, as you can well imagine.

In return I’ve agreed to drink lots of free wine, to review them (kind of) and let Asda place a small banner above each post.

And that’s all. I can write what I like. The posts aren’t pre-approved by Dom or anyone associated with Asda, nor do Asda have any say on who takes part in the tastings.

But I know you know that.

I thought I’d start the series off with a person who is just as enthusiastic as I am about wine, and with whom I have probably drunk more of it than with anyone else – my sister, Christine. So I invited myself around to her house just before New Year with a bottle of Cabernet Sauvignon (Aconcagua Valley, 2010, produced by the gloriously sussurating Vina Errazuriz), which I thought she’d like. Also it was one of the cheapest of the bottles Dom had sent – look, she’s only family! I’m saving the seriously expensive stuff for more important people.

The taste of wine depends on many variables. Temperature, naturally. I’d walked to Rothwell in the chill December air, so the bottle was blissfully below the thermo-nuclear blast of the sibling’s kitchen. But even the background music can affect the drinking experience, according to the latest research. So I asked Christine to turn off the Michael Buble.

“It’s the soundtrack of Christmas,” she said, with just a hint of challenge.

It was in fact December the 29th, but I thought it best not to remonstrate. Domestic conflict can affect the taste buds too. I didn’t want my sister’s infamous arseyness to spoil the occasion. She’s not called @ChrisGBaillie on Twitter for nothing (“G” is for Godzilla, and she chose it herself. Just ask her.)

Incidentally this particular bottle has a screw cap. There’s a reason why I didn’t go with cork and it wasn’t long before Christine brought the incident up – though, to be fair, I had prepped her to think about wine related stories.

“Remember the night you broke 3 corkscrews? Totally killing the party. Wine ran out, everyone had to go home, even though the kitchen table groaned under the weight of unopenable Bulgarian plonk … you were popular that evening!”

“That was over a quarter of a century ago” I whined … “but of course, how could I forget! It stained my soul, indelibly. Worse than dropping that cheap Bulgarian stuff onto brand new Chinos” (It was the ‘80s, it happened!)

To scrap one corkscrew is an accident. To trash two is a regrettable incident. But to demolish three in the space of as many minutes marks a person as ghoulishly possessed by the demon of temperance.

The party ran dry. The going away celebrations had to be terminated before 9pjm on a balmy July evening. The host of the party was setting off around the world in a day or two, and this get together was meant to be a riotous send off. Without wine it ws a sombre, sober, soon over affair.

In my defence these were the days before screwcap wines and 24 hour garages selling corkscrews. And the party was in the wrong end of Armley. There was no neighbourly knocking on doors and sharing uncorking equipment back then. Plus, breaking three implements in quick succession does smack of design fault rather than human error (and as the human in error would be me, I choose to believe in the inadequacy of the machinery … nothing to do with me.)

“You couldn’t possibly damage this corkscrew” Christine replied, brandishing a chunk of burnished steel that looked as if it could dismantle an oil rig. “My corkscrew is built to last.”

“Isn’t that the one you stole from Centre Parks?” I queried, gently.

“Not stole!” Christine shot back with a stare as hard and cold as the metal in her hand. “I found it at the bottom of my suitcase when we got home … must have been one of the kids.”

“But the kids were six and one” I said, to myself. I know when it’s best to keep my mouth shut, and the wine was going down too nicely to be bothered with a mere question of morality.

“Anyway, what do you think?” I said, pointing to the bottle. “Back label says it tastes wonderfully of red fruits and black pepper. Front one says rich blackcurrant, sweet spice and mint flavours – though the handwriting on there is a bit illegible, and a couple of people I’ve asked say the word is “meat” and not “mint”. I wouldn’t want a meat tasting Cab Sav.”

“We are both vegetarians, Philip … definitely a hint of mint … not a smidgen of bacon in there, thankfully.”

“You’re the one getting paid by the adjective, you tell me!”

“Ha, jealousy has rendered you uncharacteristically coy, Christine … I like the idea of mint, but I may be tasting that because of the suggestion on the label, it’s hard to tell. Definitely fruit, but that’s because it’s wine so that’s just obvious. And spice? Hmm, a little, not sure I can be too definite about the spice. The bottle may be a tad on the cool side just yet?”

“You are the one that brought it cold! You wouldn’t wait till it was room temperature, like I said”

“This room? It would taste like Scotch Broth if it was this hot. And I don’t think I could wait that long …”

“Well, tastes good to me … you want to pour me another glass?”

We managed to finish the bottle. And another. After the third was opened there was no more pretending to be wine critics, we were just enjoying the conversation, which is probably as it should be.

Anyway, I’m back there tonight. With another bottle of the Cabernet. I’d recommend it.

Just hope it goes well with the quiche …