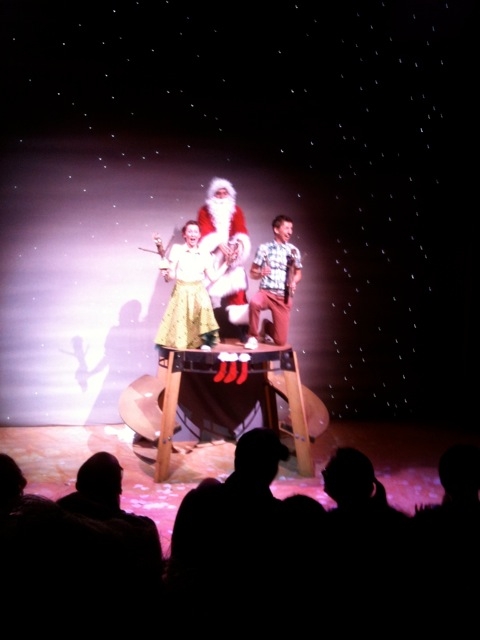 My name is Darcie and I am 7 years old. My Dad is a theatre producer. He suggested we came with him to the Edinburgh Fringe Festival this year to see some shows and keep him company. In this blog I am going to tell you all about what I saw and did while I was in Edinburgh.

Our first day in Edinburgh.  I thought Edinburgh was a huge , hilly place with thousands of steps.  We saw the castle and somebody was bag-piping.  We headed down the royal mile were there were people dressed in costumes handing out flyers and saying would you like to see this show, there were hundreds of them.

I thought the scenery was really good in this show.  There were 2 actors and lots of puppets all set in a shop. I liked it because it was exciting and interactive.  We even got to sing in places!  5 out of 5!

The 2 dancers had very sharp, quick, snappy movements.  When they stomped their feet in different places around the stage, it made different sounds.  I liked it when the dancers talked to each other adding a Indian word each time they spoke.  5 out of 5!

I liked it when we had to put our white gloves on and copy what was happening on the screen.  Their costumes were very shiny and the bright lights bounced off them all around the theatre.  2 of the street dancers wheelied off the stage on their special shoes. They did great acrobatics and could even do 1 handed handstands – wow!! 4 out of 5

This show was strange as it was in an enclosure in the Zoo. The humans in the enclosure did not talk.  They could do contemporary dance but they had no music.  They slept on hay bales and some on the floor.  I liked watching them and listening to the zoo keeper talking about them.  3 out of 5

Show 5 – The mole who knew it was none of his business, C Theatre

I liked this show because it was funny!  The cow did a massive long poo which made everyone laugh.  I thought that the show was very clever because there were only 3 actors and they could change their voices and costumes to become a new animal. I loved the songs that they sang which we could join in with.  4 out of 5

theatre!  I liked the bit where the ugly duckling changed into a swan because the floaty things on his arms looked pretty.  4 out of 5!

They gave out free sweets in this show so it was very good.  They had one house on the stage but they managed to turn it into 2 by turning it round which was clever.   I liked it when they lead the children into the forest because they were pretending to push themselves through the trees with their hands. 4 out of 5!

This show was excellent because when we got there the snow man was sitting on a chair asleep in Mr Green’s house and when Mr Green got home from his holiday, he told Mr White (the snowman) to get out…..but he didn’t go.  The play was about his attempts to get rid of him.  When Mr Green was trying to tidy up the snow that Mr White had left, Mr White put even more snow inside.  I had to go and help with this part!  Everywhere was VERY messy by the end of the show.  We had great fun throwing snowballs at Mr White.  5 out of 5!

I loved Hurry Up And Wait because all they had for the set was two stools and a clock. They did lots of funny things with just two stools and a clock. The two performers were Clowns and the story was about them waiting for a parade. It was really funny because they did lots of silly things to the clock and to each other. They had very good facial expressions. I giggled all the way through this show which everyone thought was very funny. 5 out of 5 !

Mirozzo was a massive inflatable sculpture that you could go inside. It was enormous and made up of lots of different colours and the light outside made them shine in different ways. I really liked the ceiling because it had loads of star shapes and when you blinked they looked like they moved. You could sit or lie down in side and it was very calm inside. We stayed inside for about 30 minutes and there were other people inside as well. 4 out of 5

I love Roald Dahl stories but this was disgraceful. It was meant to be the revolting rhythms stories but they only did two of them and then made up the rest. There was three actors, no costumes, no set, they were trying to be funny but they were not, no music, it was rubbish and I was very disappointed. 1 out of 5.

This show was in a small black box about the size of a telephone box. You went in two at a time and the show only lasted for 6 minutes. It was about a boy who eat books I liked this show because there were three windows that opened in turn and behind each window was a different puppet scene telling the story. They also used projections which were pretty to look at. 5 out of 5!

The Tattoo was a huge show that takes place at Edinburgh Castle outside. You sit in a big stand like a stadium and watch the show. The show had lots of drums, bagpipes and marching as well as fireworks at the end. I loved the tattoo and have never seen anything like it before. My favourite bit was a army band from Holland who played all sorts of instruments while riding their bikes, it was very funny and they were very clever. I also really liked it when they did big projections onto the castle. 5 out of 5 !

This was another puppet show. It told the story of a cat, a boy and a girl. The story was about friendship. I liked this show but it was not my favourite. 3 out 5

This show was about star wars and Jedi Knights. It was very interactive and you got to go on stage lots and help tell the story, the end was my favourite bit as we all were given light sabres that flashed in the dark and we all had a battle. I got to go on stage and help find the missing crystal, which was scary and exciting. 5 out of 5 !

This show was in an igloo and was about Animals. One story was about how a camel got his hump another story was about an Elephant and how he got his long trunk and another one was about a Whale and how he could not eat people. The show had 4 actors in it who also sang. I liked this show because at the start you got to make the animal noises and at the end you go to try on the animal masks. 4 out of 5

I really enjoyed my first trip to Edinburgh and the Fringe and want to go back again next year. My favourite show was Snow play and my least favourite show was Revolting Rhythms. It felt like we walked miles and miles while in Edinburgh and some times we got very wet in the rain but it was still lots of fun. I think there is lots for kids like me to go and see so you should ask you parents to take you.