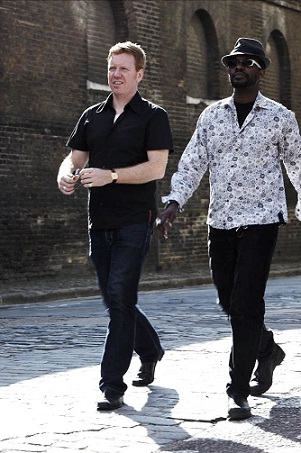 David McAlmont is the most underrated vocalist of his generation but thankfully after a period of silence is back on the road with his new project Fingersnap.

“Fingersnap is the consequence of a long musical friendship with Guy Davies, and we’ve just both got to a point where we’re available to work with each other which we’ve wanted to do for a long time,‘ says David.  “And we like other enough to want that to be an exclusive arrangement.”

David’s biggest hit was the classic top 10 hit Yes, where his yearning vocals were backed by former Suede guitarist Bernard Butler.  He‘s become known as a voice for hire collaborating with great composers like David Arnold and Michael Nyman.

“Instead of calling it McAlmont or McAlmont and someting,  Guy was very specific he didn’t want it be McAlmont and anything, so it’s Fingersnap.

“The thing that has been frustrating is I’ve worked with people like David Arnold, and he wanted to to be the composer for the Bond films.  Bernard wanted to be a producer.  Michael Nyman’s got his thing, so has Craig Armstrong.  They’ve all got their own thing.

“I think the fans have been quite frustrated by the stop and start nature of my career so I’ve always been looking for someone like Guy to collaborate with on a more permanent basis.”

So what can his loyal fans expect when the duo play the cosy Trades Club in Hebden Bridge?

“It’s always been soulful music and that hasn’t changed, but Guy’s quite the maestro on the piano so he’s an equal presence. The song writing is based on lot of soul and a lot of great pop, so all those elements come together.

“It’s just the two of us and, because we do these concerts in people’s house called Salons, we’ve developed this really powerful show with just voice and piano.  A lot of the fans like the stripped down approach so we responded to that as they wanted to hear the voice uncluttered.

“At the moment songs that people know me for might still be in the set. We might do the odd cover of tunes by a well known duo so that can be expected.”

This series of intimate gigs is plugging their Smokehouse EP which they spent much of last year  recording in Ireland and a Fingersnap album is in the pipeline.

“At the moment we’re writing five new songs to go along with the new songs we’re already written, so that will bring us to about 45 songs, then we’ll pick the best of those.

“The aim of Fingersnap is to be ever present on the road, putting out a new track you can download for free or just releasing a new album.”