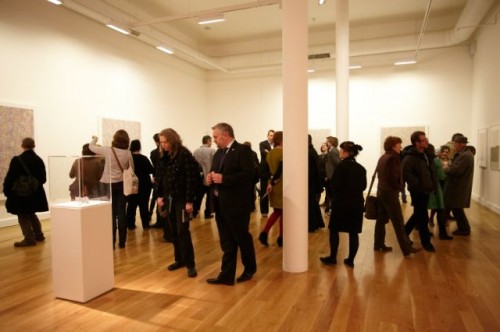 One of the best things about Modern Art is that you don’t have to go to the trouble of thinking much. In fact, most of us know so little and don’t trust our own senses that it’s best we refrain from judgement. Leave that to the critics and curators. They’ve got it all worked out so we don’t have to.

Still, exhibitions are social occasions and there is a tricky etiquette and elaborate behaviour code to follow. Nobody wants to appear gormless. So, in the interests of common cultural advancement and Northern pride, here’s my short but definitive guide to looking like you know what you’ve doing in an art gallery.

Obviously art isn’t fun. Don’t go expecting to be entertained. This isn’t a playground. Anyone in a gallery laughing infectiously, guffawing uncontrollably, or sniggering behind a raised hand is simply showing their lack of understanding. They cannot have gained the right degree at an appropriate university. Levity has no place in an art gallery. Whatever you are thinking keep it to yourself, start scowling and squinting at the world with an attitude of, “hmm, really . . . ” Don’t overdo expressions of enjoyment if you want to be taken seriously.

For heaven’s sake keep your hands in your pockets and quit the jaunty stride. The proper pace is funereal. Your face should crumple, your brows furrow and your feet drag along the ground as if you are weighed down by the awesome existential gravity of the situation. Have a muscle removed from your neck so you look permanently puzzled; get the spring removed from your step and start shuffling. Need I say that sudden movements associated with spontaneous outbursts of joy are disapproved of? You mustn’t give the impression that you are anxious for the ordeal to be over as quickly as possible. Art is an endurance sport, you get kudos for your ability to endure without complaint.

Never venture an opinion or hint at a judgement. There is always someone in the vicinity who will take great pleasure in putting you right. Usually these people never have an opinion or make a judgement of their own but they have made excruciating efforts to ascertain the latest thoughts of the people in the know and they are eager to bludgeon you with the correct interpretation. Your unschooled enthusiasm marks you as a sacrificial victim. You will be embarrassed and devastated, even though your tormentor may be found five minutes later arguing the exact opposite (there are two sides to every critic) while you have slunk home to weep alone in front of the TV.

The appropriate apparel is crucial. This is not my strong subject, but even I know not to wear Farah pants. Men under 25 have two choices; tight trousers and sweater, set off with a nice man bag, or trousers worn with a belt six notches slack exposing sweaty Calvin Klein undies, and a cavernous hoody. This looks absurd on pre-pubescents and ridiculous on older guys, but that is exactly how you know it’s the very cusp of cool. Women . . . I have no expertise to offer in that department.

Never wander into an art gallery alone. The single person causes suspicion. You will be regarded either as a nutter or as an envious and less successful member of the artistic clan out to make a point (remember Tracey Emin’s bed!) Often these are one and the same person. The gallery staff are well trained in handling such regrettable incidents.

Don’t believe the official doctrine of any gallery. Remember, it’s always do as I say, not do as I do. So when you see art that’s plugged as interactive, participatory, multi-media, that’s all about “interrogating the institution of art,” then step away carefully and for pities sake don’t touch the thing! So much as smudge the precious object with a palm print or your boozy breath and you will find yourself in the Bridewell before you can say site specific installation. Also pictures are out. Artists are more superstitious than any lost tribe of animists – you take a photograph and you may end up in a pickle (and if it’s a Damian Hirst that’s not a nice place to be!)

Artificial light, precise air conditioning, and white walls make the gallery a clinical space. You are much more likely, in fact, to pick up MRSA in any hospital ward than you are when you go to see some art. And all that bright light means that you’re best keeping your Ray Bans on. Remember, eye contract can lead to untoward human contract and may cause a distraction from dwelling on the absolutes of art.