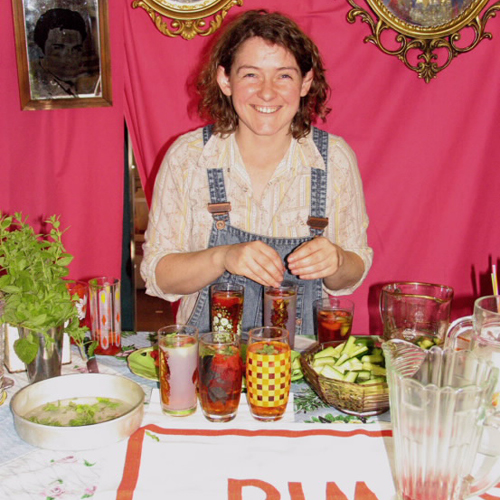 This month we talk  to Jane Earnshaw of I Love West Leeds Festival, about how her childhood dream job became a reality and years later she found herself sitting in a sea of sequined smalls.

What do you do?

I run an arts festival called I Love West Leeds (which yes, I now wish we’d called something else as you can’t move for ‘I Love’ something or other) and in my spare time I’m having fun renovating an old shed on a friend’s allotment.

One minute I’m buying 2500 pairs of Y-fronts, the next I’m stood in an empty warehouse full of broken glass thinking this would be a great place for the opening of the play Dust about the Armley Asbestos story. Then I’m stood in front of a committee board asking them for money for the festival. Then I’m dreaming of Millennium Square covered in people on space hoppers for the Space Hopper Olympics – although we’d have to call it something else of course because you can’t use the word ‘Olympics’ without being sued in case some numbskull gets your event mixed up with that little event going on down in London.

What’s so great about it?

I am incredibly lucky, I get to meet and work with some fantastic artists and a crew who give their all and more because they believe in what we are trying to do.
I get to dream about ways to make people smile, and, when I’m not banging my head on the desk in frustration at certain things, it really is the best job in the world!

Well of course the I Love West Leeds Festival coming up in July. But for something to do in the near future I would say a must is FuseLeeds09 from 25 April. A fantastic eclectic music festival that only happens every couple of years but when it’s on it’s very special. And for something closer still yet further away…Bradford has a new small but perfectly formed disco called Buffet (it’s a nice spread) and the next one is on 21st March at the Bradford Playhouse.