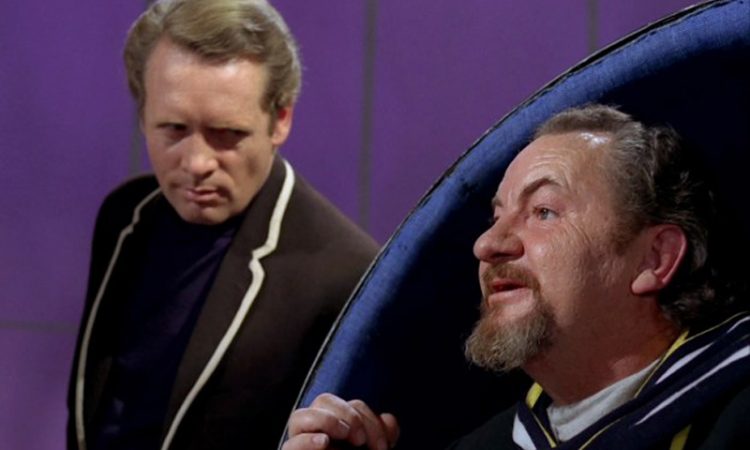 The Village is having a craft show and everyone is invited. Meanwhile, Number 6 has acquired a new neighbour, Number 8, a confused young woman who reveals her name is Nadia and who immediately tries to escape only to be gathered up by Rover and sent to the hospital to be tortured. Agreeing to be nicer and to take village life more seriously if she is spared, Number 6 discovers from Nadia that she knows the location of The Village… Now all they need is a plan of escape and an entry for the craft show (not necessarily in that order)…

No.2: He can make even the act of putting on his dressing gown appear as a gesture of defiance.

This No.2 is keen on a psychiatric intervention to fathom the secrets of Number Six. He knows there are some methods they haven’t tried (an ice pick through the eye socket for instance) but “I don’t want a man of fragments,” he says, “I want him with a whole heart, body and soul.”

There’s a lower quotient of evil quacks and mad scientists in this episode than general. The only human experiment, on the new Number Eight who gets locked in a room with a potentially lethal electrified floor, is so poorly constructed and methodologically flawed it’s such an obvious deception that it’s a wonder Number Six doesn’t burst out laughing. But this doesn’t make Leo McKern’s character any less threatening or creepy. He promises to “cure” Number Six; “No more nightmares.”

The cure consists in making Number Six a well oiled cog in the social machine.

All Number Six has to pit against the power of the therapeutic regime is his wit and verbal irony (“I must add sense of humour to your file. They tend to miss out things like that,” says Number Two, “very important.”) That, and his obstreperous disposition.

Beyond irony… there is an even more subtle and telling kind of ritual insubordination. There is a special stance that can be taken toward alien authority; it combines stiffness, dignity, and coolness in a particular mixture that conveys insufficient insolence to call forth immediate punishment and yet expresses that one is entirely one’s own man. Since this communication is made entirely through the way in which the body and face are held it can be constantly conveyed wherever the inmate finds himself.

That’s Erving Goffman again, from the last Chapter in Asylums about the “recalcitrant self”.

Number Six’s ritual acts of insubordination – hiding a speaker in his fridge, putting far too many lumps of sugar in his cup of tea, acting as if he can give Number Two orders – make no actual difference. Number Two simply takes them as evidence that Number Six is resisting treatment and the prognosis is worse. He records his clinical observations,

And Number Two presses on with his cure, including some Orwellian art therapy where participation is pacification and engagement is acceptance. He will bring Number Six to the inescapable realisation of precisely where he is. And which side has him captive.

Number Six is suffering under the illusion that the sides he is up against are “us” and “them”. In reality, as Number Two is carefully making plain, the only sides that count are “in” and “out”. Number Six is an insider, and once you are in there is no getting out. The inside information he is privy to makes it impossible for there to be any way out. And the more experience he has of the Village, the more he knows, making him even more implicitly valuable “on the open market.”

This is one of the most complicated Prisoner plots with probably the most satisfying ending. It’s one of those you can watch time and time again and still be genuinely thrilled by the final reveal.

And the last shot of Number Six, having just taken the hardest knock of his life in the Village so far, is classic; he casually strolls to his apartment, clicks his fingers as if nothing has happened, the door automatically opens for him, and he walks inside, cool, dignified and unbroken. He’s not cured. Not clockwork. Still entirely his own man.

Today’s random Prisoner moment; the inside of Number Six’s fridge… milk, eggs, a chicken, a couple of bottles of wine, and Oh look, it’s an Electrolux fridge, just like they sell in the shops back home. Obviously the Village doesn’t have it’s own brand of white goods. 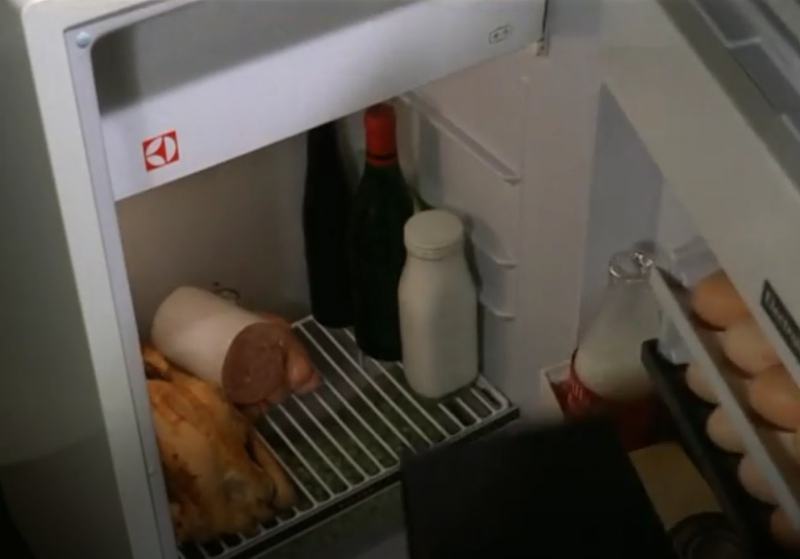 Read about previous episode Dance of the Dead here.