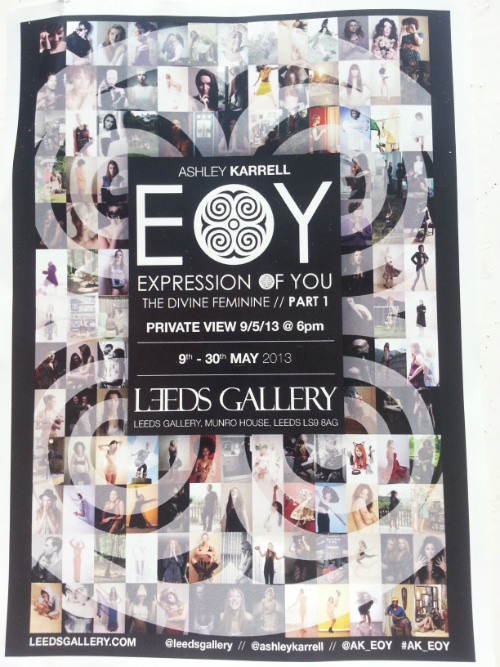 I write about people quite a lot. And I’ve written about quite a lot of people. When I write about a particular person I like to think my portrait is accurate, truthful and faithful to how that individual would want themselves best represented. I’m interested in writing about real people in a way that people really identify with. In all my years of writing, however, not a single subject has glanced at my notebook and sighed, “that’s not quite me, Phil, not exactly how I see myself … maybe if I removed my underwear we’d get nearer to the real me!”

This is maybe the main difference between the experience of writers and that of photographers. Photography is so damn intimate and tempting and, well, sexy I suppose. Writing, on the other hand, almost demands that you keep your kit on.

If the new exhibition by Ashley Karrell – Expressions of You, The Divine Feminine at Leeds Gallery – is anything to go by, all a photographer has to do is remove a lens cap and perfectly normal, respectable, intelligent women get an urge to strip down to their birthday suits. There seems to be an almost Pavlovian response to the sight of an unsheathed SLR camera. I asked one woman who was at the private view last night about she got involved in Ashley’s project:

“He’s a friend, he was round to photograph my mum,” she said, “and I was standing right behind her … seemed natural just to take my clothes off … you know, for the camera.”

I nodded, not really knowing at all, and wondering what weird magic Ashley Karrell was practising.

“Nothing rude, it wasn’t tasteless” she said, wafting her hand listlessly behind her back, “all you could see was … around here, no boobs or anything … mum didn’t mind.”

Would she’d have had the same reaction if instead of a camera Ashley had pulled out a reporters pad and a biro, and started asking deep and meaningful questions? … As Ashley is suave, charming and devilishly handsome, I reckon it may have taken ten minutes more, but he probably could have done it. Ashley with a camera is a killer combination; you only have to look at the photos to tell that he’s just got a knack for allowing people to have fun with their self-image.

I wasn’t sure what to expect from the exhibition – I certainly didn’t expect there to be so many boobs and bums and naughty bits on show. I’ve bumped into Ashley a number of times over the past couple of years and he’s often talked about the project – even cajoling a lady friend of my close acquaintance into posing for him (what the heck did they get up to I was thinking when I first saw the pictures on display … and I was amused when I saw she was one of the few people in the exhibition still in possession of a cardigan.) Seeing the photos was a bit of a surprise … they are genuinely bloody good though.

If I had one quibble it would be that there are possibly too many images – I felt overwhelmed – and the whole thing could have done with a narrative to help explain what the hell was going on. The lack of any text was mentioned by quite a few people, though I think this is being rectified before the official start to the exhibition on Monday.

Expressions of You is on at Leeds Gallery in Munro House until 30th of May. It’s well worth a visit. You may even get to see someone you know in a way you never knew, if you know what I mean.