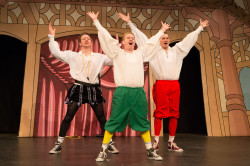 During its UK tour, The Reduced Shakespeare Company stops at Bradford’s Alhambra where Leo Owen catches the show

Swashbuckling dramatic music introduces the arrival of Matt Pearson on stage, who introduces the show parodying a flight attendant with jokes about donning oxygen masks. In the style of a traditional Shakespearean prologue, we’re told the show will last approximately 90 minutes and that as the complete works of Shakespeare weighs around six pounds, they’ll be covering eight ounces of Shakespeare’s writing every seven seconds.

A simple pantomime style painted set depicts Shakespeare’s Globe Theatre and the cast of three wear tights or leggings with shorts, billowy white shirts and colourful converse boots. Greensleeves plays as Gary Fannin professes to be a Shakespeare scholar who dreams of seeing the complete works in every bedside drawer of every hotel room. Fannin provides us with a preface before promising to take us on a “theatrical jihad”. Complaining about “intellectually flaccid members of the 21st century”, he asks how many of us have seen or read a Shakespeare play before upping the stakes by daring anyone who’s read King John to raise their hand.

Audience plant, Ben Stratton comes to the stage and gives an amusing reading of Shakespeare’s bio from prompt cards that include research clearly taken from Wikipedia, claiming Shakespeare invaded Poland. All three sound very American and announce their pleasure to “prevent the complete works of Shakespeare abridged.”

As one of The Bard’s most famous plays, Romeo and Juliet is first up with comedy slo-mo play-fighting, camped up performances and a mixture of original lines with the RSC’s (Not to be confused with The Royal Shakespeare Company!) own more colloquial modernisations (“Trying to get into Juliet’s pants”.) Stratton, Fannin and Pearson inject additional humour pretending to be easily distracted by audience members, using each other as props and deliberately ignoring the metre of Shakespeare’s play (“You call me butt love?” queries a RSC player after a mis-stressed line).

A narrator links scenes with contemporary rhymed intros before we race through the bulk of Shakespeare’s work with Titus Andronicus presented as a cookery show (“It’s finger lickin’ good”), Othello as the rap “The Fresh Moor of Bel Air” and many of the comedies mashed into one, “not plagiarised but distilled”. After powering through approximately 16 plays in merely five minutes, the RSC move onto an overly-Scottish MacBeth complete with tartans, head-butting and golf clubs and an American football game to cleverly symbolise the royal tragedies in one (“The quarter back’s giving it to the hunchback…”).

Over-exaggerated body-language and movement characterise the show with Hamlet jumping from one foot to the other, inanely repeating “cuckoo la la” and exiting the stage in the wrong direction. Beards, cloaks, wigs and skirts are used to represent character changes with fake boobs and a beard intentionally worn at the same for “mother uncle”. Sock puppets deliver serious speeches, mechanical dinosaurs walk across the stage with glowing red eyes in Trolius and Cressida and an encore sees the cast tackle Hamlet at dizzying ever-increasing speeds, including a backwards performance, warning us to listen out for the Satanic messages.

To counter, Pearson acts as the more responsible company member, keeping audience member’s occupied with ukulele performances of Britney Spears’ “Hit Me Baby One More Time” and Kate Perry’s “I Kissed A Girl” when remaining cast members chase each other around the auditorium before seemingly disappearing. There’s lots of audience participation with house lights up while a programme is borrowed to check which plays still need covering; later the audience are grouped off to represent Ophelia’s subconscious, superego, ego and ID with one volunteer running back and forth across the stage while another screams on cue.

Watching the cast at work occasionally feels like observing small children playing during a school break but the show is in many ways quite traditional and in keeping with how Shakespeare’s plays would have originally been performed, cleverly highlighting patterns across his work (cross dressing characters, ill women…). During the show, one RSC member honestly confesses that they don’t have to “do [a play] justice, we just have to do it”, humorously highlighting how much room for error they truly have; technical accuracy may not be essential to the show but team work certainly is. The three man company complement each other well, giving high-energy exceedingly slapstick performances that are exhausting to watch but enormous fun.

Although some of the humour is a tad too infantile (Gags like: “Do not try this at home – go to a friend’s house…” and Juliet’s death scene come to mind), there are plenty of clever lines and the RSC make the show topical with references to Beliebers, rival stage productions and the discovery of the car park skeleton. Bring on UK tours for some of their later work; Yorkshire’s ready for The Complete History of America (abridged), The Bible: The Complete Word of God, The Ultimate Christmas show (abridged) and indeed anything else the RSC wants to throw at us.

The Reduced Shakespeare Company stopped at Bradford’s Alhambra on April 25 2013 before continuing its UK tour when it returns to Leeds on June 18: