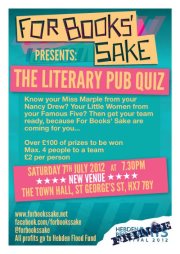 For some reason, I put quizzes on a par with tests and exams. All tests (driving, academic, eye-sight) make me nervous for the same reason – there’s a chance I could fail. Quizzes are much the same, even though they’re supposed to be ‘light-hearted’ or ‘just a bit of fun’ but still, somebody has to win and somebody has to lose and I’m most likely to be the latter. So when people say “Hey, wanna come to a pub quiz tonight?” all I really hear is “Wanna take a test for funsies?” and I fail to mask the look of terror on my face and I politely decline the invitation.

Unless it’s a quiz about stuff I actually know about… Say… a quiz that’s specifically about books? In which case ignore everything I just said, because I would definitely be up for that.

And I was definitely going to go to the book quiz that For Books’ Sake hosted in Leeds back in April for World Book Night, except, I sort of… forgot to enter. So when I went down to Café 164 in the afternoon to say ‘hello’ to the editors Jane and Alex, I found myself having the following stilted conversation:

FBS: Hey Jo, good to see you. Will you be staying for the book quiz?

FBS: Great! Did you enter?

It was at this point in the conversation that we all began to wonder what I was actually doing there alone, without team mates, at a book quiz I hadn’t entered. I contemplated suggesting that I was just there to ‘monitor the situation’ or perhaps be a ‘book quiz referee’ in case things got out of hand, but let’s face it – furious literary-based riots aren’t all that likely. And if a book-induced riot did break out, I would be the worst person possible to deal with it.

So, when the quiz teams began to arrive I went home, cursing my social awkwardness lack of personal organisational skills. I wished that I’d got a team together and entered – because, for once, I might have been in with a chance of actually winning.

And as it happens, For Books’ Sake will be bringing their book quiz to Hebden Bridge Arts Festival fringe next month. And I’m going to enter. The quiz will take place in the Town Hall, St George’s Street, HX7 7BY from 19:30 on Saturday 7th July, which leaves me with just enough time to brush up on my pop-quiz knowledge of all things fiction. And by that I mean look up stuff on Wikipedia. There are loads of prizes on offer – and since I’ve recently promised myself that I won’t buy any more books until I’ve finished reading the ones on my shelves, winning is really in my best interest. Because I never made a promise to myself that I wouldn’t win books.

Entry is a mere £2 and you need a team of four people to enter. And if you want to win, you should probably get four people who know stuff about books. You could even hold an X-Factor-style audition for your potential team-mates. But that isn’t really necessary. And it might make your friends judge you for behaving like Simon Cowell. On the other hand, if you’re not bothered about winning, just assemble a group of people who are generally enthusiastic about going to the pub.