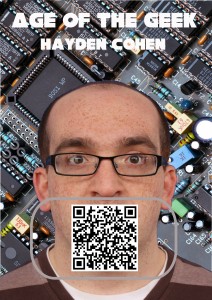 I should be in a nice bar in town.

I should be drinking cocktails.

I should be warm and dry.

I should be at the Culture Vultures event at Call Lane Social.

Instead I’m stood in a car park in Holbeck in the teaming rain giving directions to a taxi driver who’s pulled into the wrong building. I’m stewarding Hayden Cohen’s spoken word event in the Paintshop, Temple Works. Age of the Geek, he’s called it. From where I’m stood it’s more dreek than Greek.

I’m late too. And a little squiffy from meeting Kirsty (@gazpachodragon) in the pub with Harvi (@MrPeshwari) to sort out an interview about a little event he’s involved with next month. The interview went well (three bottles of Chenin Blanc well) and by the time we left it was already well past six. Just enough time to dash into Home Value to pick up some wine (I’m not proud!) then jump on the number 1 to the Dark Arches – and if anyone with any sway with the public transport system in Leeds is listening, that’s the nearest stop to Temple Works, a good five minutes walk away.

When I got here Hayden had already set up, sound checked, and sorted the furniture. The support band, Urban Explorers, were busy twiddling and monitoring and making the most uncanny noises I’ve ever heard in that place (and I once saw Thomas Truax in there, it attracts weird types.) They don’t seem to have recognisable musical equipment, just four large tables crammed with tons of gadgetry and riddled with extension cables and wiring. The whole thing looks like a grand, geek car boot sake. And the nose was obviously not to everyone’s taste. I noticed a couple of early birds had retreated to the comfort of their vehicles to listen to a CD of their own choosing. Can’t please everyone, as the saying goes.

I was put on toilet duty (older clientele tonight, I was told, the loos were crucial,) and told to watch the car park and entrance too. Lucy (@lulovesglitter) had already volunteered to be on the front gate to make sure guests knew where there were going, and was shivering under a tiny brolly. She was missing the cocktails at Call Lane Social too. The things we do for art.

Hayden was due to begin his set at eight, and exactly on the dot of eight-thirteen he wandered on stage – well, onto the carpeted area where the microphone is kept – and introduced the evening. It was a practice run for Edinburgh and Brighton Festivals, he said, still not finished so any feedback would be appreciated. Then he launched into his first poem.

It’s hard when you’re stewarding to completely concentrate on the performance as the role is to keep people safe – or at least stop then doing anything stupid – and there are constant demands on your attention. Within the first few minutes someone got stuck in the loo and I had to talk the lady out of her indelicate predicament. Then the band all decided on a communal cigarette break and collected immediately outside the entrance – where the metal fag buckets are – talking a little too loud. The nose was interfering with the enjoyment of the poetry.

I quietly slipped outside and made one of those hushing hand gestures. “Hayden is performing . . . just him and his voice,” I said, “can’t compete with you four!”

“Ha ha, are you the bouncer!” they asked, showing no inclination to hush. In fact, I seemed to make the noise situation more noisome.

“No, not a bouncer” I calmly explained, “but I would appreciate if you’d move away from the door if you need to chat.”

They all laughed again and loudly promised to be quieter. My gentle argument didn’t seem to be having much effect on observable – and, more pertinently, audible – behaviour.

The door swung open with a bit of a crack. The director, Susan, bustled out. “Guys,” she said, ” vamoose!” She accompanied her words with a gesture that left the guys in no doubt that the distance between verbal warning and physical intervention was just a decibel away. The guys shut up. They made not another murmur while Hayden was performing.

The last half of Hayden’s set included a song about liking Star Wars more than Star Trek – or was it the other way round? – a poem about an apocryphal social media mogul, Zark Mucherberg, and best of all a medly of tunes played on an amped up stylophone . . . you really have to see that, it really was pretty impressive. Everyone was laughing and clapping along. Genuinely geeky fun.

Hayden ended by mentioning Edinburgh and Bristol – though if you can’t get along to those events he will be back playing Temple Works again later in the summer. Check the website.

The band, Urban Explorers, are also back to Temple Works in a couple of weeks as part of the Why Rush festival, and they’ve promised to play some pop . . . at least I think that’s what they said . . . I’m looking forward to watching them play to a bigger audience in a bigger space, should be fun.