With less than a thousand days to go to Hull being the UK City of Culture in 2017, it’s a good time to reflect on the UK’s fourth best cycling city (2011 report).

‘Fourth best?’ I hear you say, as there are no prizes for being fourth, but it’s more of a surprise that Hull keeps its cycling lights well hidden (quite literally for some cyclists). I spent a week in Hull in April and what was really refreshing was to see the number of ordinary people cycling on ordinary bikes in ordinary clothes. The morning train that I caught into Hull had at least four bikes on it every morning, one of them belonging to the Sustrans project worker at the University U-travel Active Bike Hub which was launched two months ago. 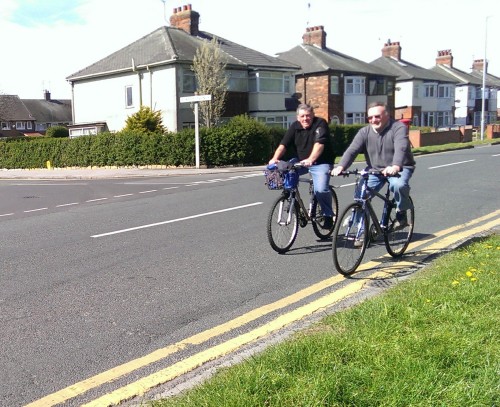 One of the current cycling debates in the UK is how to get ordinary people cycling again for ordinary trips. Much of the UK’s current crop of cyclists give a vision of something extra-ordinary and therefore inaccessible to ordinary people. The commuter cyclists whizzing by on high performance bikes in high performance gear, the chic fixed wheel urban cool, all remind me of a quote from a cycle focus group in Scotland ‘I don’t want to be a cyclist, I just want to cycle’. 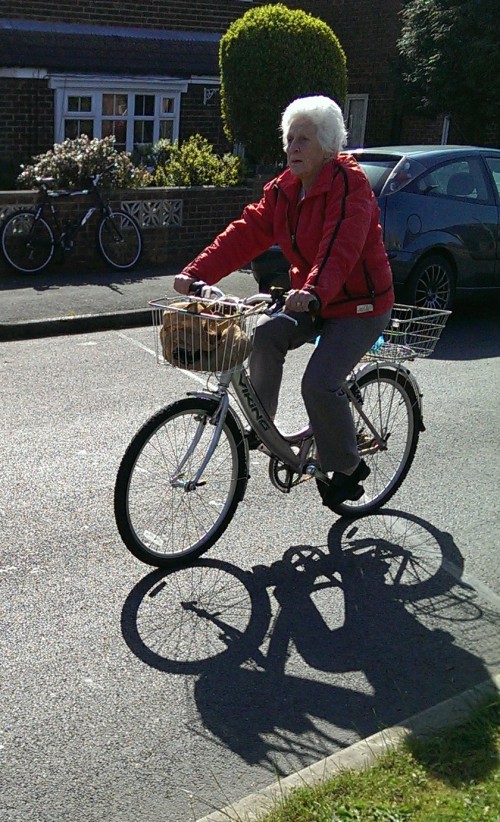 I didn’t cycle all round Hull this time as I was working about three miles west of the centre, but I have been there a few times in the last 15 years. In the late 1990s onwards what was remarkable was the number of bike lanes that were implemented (whilst most other places found this far too difficult); however, many of the cyclists I saw this visit looked like they’d been cycling long before it was trendy. For the commuter trips into and out of the centre there were a few more lycra clad people on what looked like newer faster bikes, but what I’ve concentrated on for this post is the more people doing what is more often called ‘utility cycling’. There were lots of bikes with baskets on and lots of older people using their bikes to get around. The aged ‘8 – 80s’ vision was certainly visible in the top end of the range where I was in Anlaby, with lots of older people riding during the daytime. 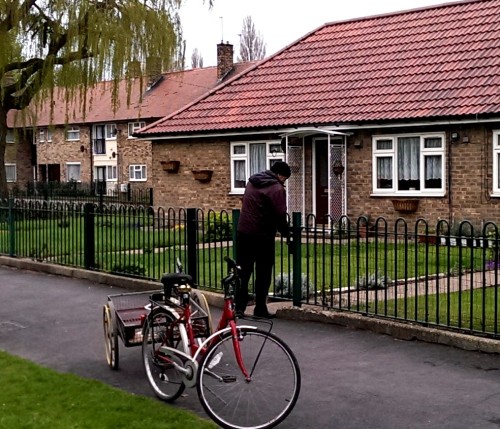 One of my favourites was a man who had made his own bike trailer out of what looked like a couple of old wheelchair wheels. It would be easy for me to slip into nostalgia for bygone days where we used to customise and fix up our old bikes, but the underlying question is how has Hull held onto its older cyclists when in many other places in the UK they have disappeared? 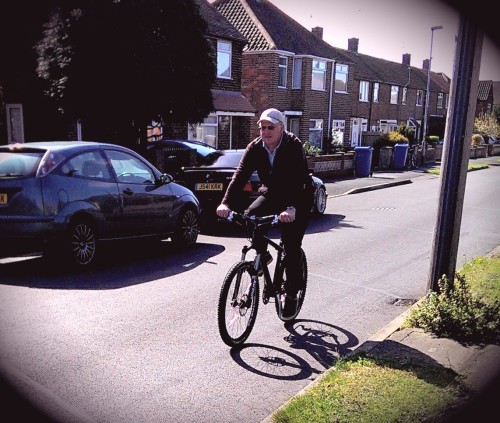 One thing that was obvious was that the cyclists all looked relaxed and as if cycling was the most natural thing for them to do, they didn’t look as if they had put on anything special to ride around their local neighbourhood. 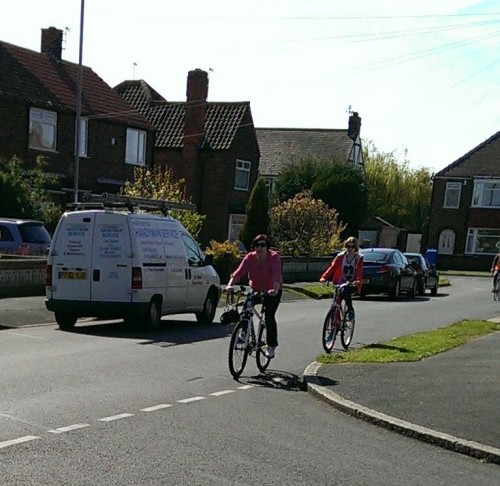 Some were out on their bikes cycling on the road, similarly not wearing anything special and finding practical ways to carry things like a handbag over the handlebars. 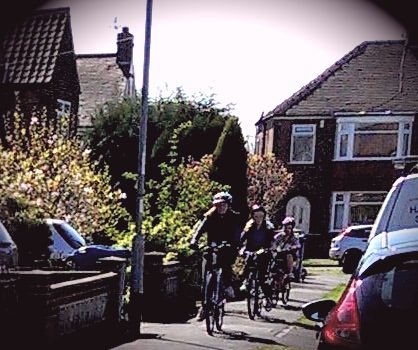 Others were cycling on the pavement. There’s been a lot written about pavement cycling, with the suggestion that it reflects either that cyclists have been bullied off the road by danger, or that there should be better provision for them. I think most of us are not fans of the shared space solutions where part of the footway is partitioned for cyclists without much thought to a continuous journey. What struck me in Hull was that however poor or disjointed the provision, people just got on and were cycling, making the best of whatever they could find. 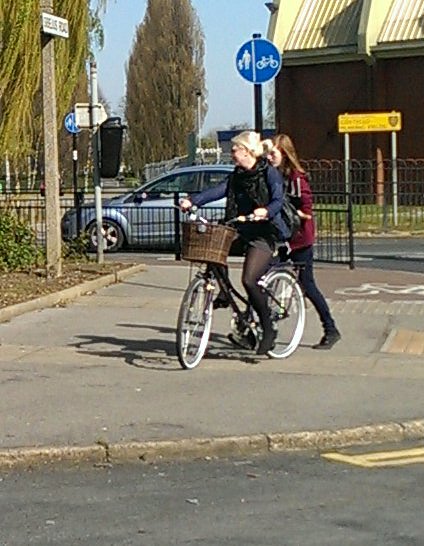 I like this picture of a girl and her friend, one walking, one cycling making the best of the shared space. Perhaps somehow, invisibly, cycling culture has blown across the North Sea from the Netherlands to the east coast, or it came across on the ferries, but bikes with baskets were very prevalent where I was in Hull, and it even made me feel a bit self conscious of cycling around with panniers.

There were some people with more complicated bikes and trailers, and I saw quite a few younger children cycling on the pavement. This is  where the cycling culture in the UK really does have to grow. All of us that have children still know that it is too much to ask to cycle on most roads and cycle lanes with our 8 year olds (I have one of those). We are going to have to work really hard to get the segregated infrastructure that will make a network that invites door to door journeys for primary age children and families, because at present very few of us can make many cycle journeys with our kids without using cars and bike racks.

There was the same tension that many of us see in cycling on the pavement and the complaints it causes from pedestrians. There is a legal and general acceptance that small children can cycle on the pavement, but how much better would it be if the cycle lanes accommodated all and allowed for the kind of cycling that children do. For too long we have emphasised a network that accommodates driving errors and lapses and punishes errors by the most vulnerable. 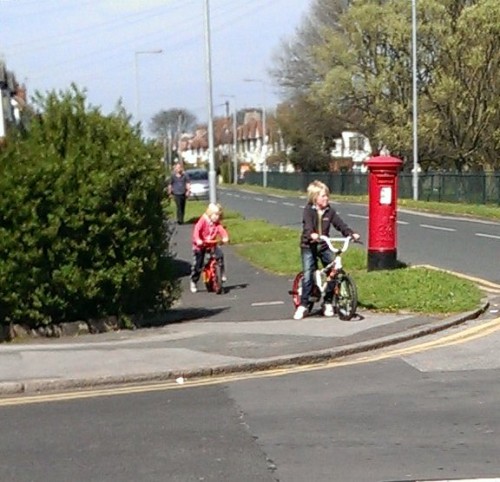 Some people don’t really ever graduate from pavement cycling and it is these that the pedestrians probably have the most legitimate complaints about. I’ve a growing library of pictures of adults cycling on the pavement right next to a cycle lane; often the cycle lane isn’t good enough, but also because perhaps we are all creatures of habit, and don’t make rational transport decisions all the time but rely on what we’ve always done. This picture shows a man cycling along the pavement through a bus stop inside a 2m advisory cycle lane, with a buffer strip from the parked cars. 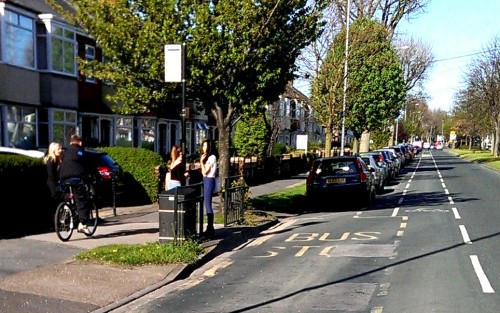 However and wherever they cycle in Hull, it hasn’t lost its connection with cycling, lots of people cycling ordinary bikes in ordinary clothes, making the lycra clad look like the minority that they really represent.

Perhaps, in 2017, Hull could really celebrate this part of its culture. Given the explosion of cycling arts and culture around the Tour de France this year, they have something to shout about.