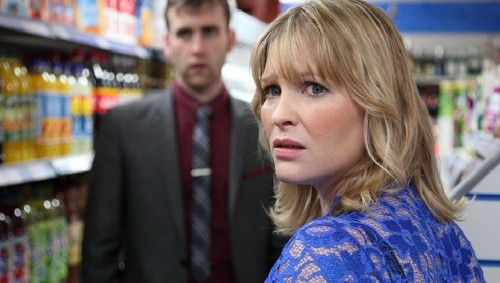 A young mum struggling to keep smiling, hiding her private sorrow from the child she has to bring up alone. A desperate lad with a habit for weed he can hardly manage to pay for. His brother, clutching at every straw to keep his long-suffering girlfriend with him. An ageing, plump woman with milk-bottle specs, bringing home stray dogs to the dismay of her uninterested, cheating husband. And the boss, dry and dour, but taking care of them all as best he can.

These are the people whose lives are about to be launched into the machine, bounced up and down, and shot out like so many balls in a lottery draw in Kay Mellor’s new BBC One drama ‘The Syndicate’, starting this Tuesday.

With a line-up that may as well have been born into these roles, this five-part series follows five workers at the edge of despair, at the threatened cut-price Right Buy U supermarket in Leeds – that is, until their lottery numbers come up and a cool £18 million falls into their laps.

Timothy Spall plays Bob, the manager presiding over a doomed shop, preparing to make his move to the Holbeck branch when his is shut down. Joanna Page of ‘Gavin and Stacey’ journeys north from Barry Island as young mother Leanne (the sugar-sweet south Welsh accent – though odd in a suburban West Riding minimart – is happily retained). Horsforth boy Matthew Lewis meanwhile makes his first television appearance in his new pin-up boy status after his apprenticeship on screen as the chubby, buck-toothed, dumbo-eared Neville Longbottom in the ‘Harry Potter’ series.

Leeds’s own Kay Mellor took questions along with Matthew at a screening of the first episode at the Leeds College of Music last week. In turns tragically comic (the quiet sadness when Lorraine Bruce as poor innocent Denise can’t understand the scores of text messages her husband sent to the same unknown number in the last month), and simply tragic (the despair in Joanna Page’s eyes when her daughter asks why she doesn’t have a daddy; the lengths to which Matthew Lewis and his older brother will go to make some much-needed cash, with awful consequences), on the back of Episode One it promises to be a stunning and occasionally challenging watch.

One of the audience members last week asked Kay why Leeds hasn’t had the same kind of airtime as other northern cities such as sexy Manchester or cool Liverpool. (I forget who put this question but you’d have to go and ask her which part of Manchester she’s ever visited that is in any way sexy.)

Kay herself didn’t necessarily concede the premise of the question: as she says, she’s always written about Leeds. Parts of town are casually referenced throughout the script; even the broad morning shot of the magisterial Queen’s Hotel towards the end of the first episode raised a knowing smile of familiarity from the audience last week.

Though the actors are instantly recognisable in their own right, their rawness and roughness on the screen has a Leeds quality of its own that locals will find familiar – even if the story becomes sheer fantasy when the man from Mercury Millions arrives in town!

Kay Mellor’s ‘The Syndicate’ launches on BBC One on Tuesday 27th March at 9pm.