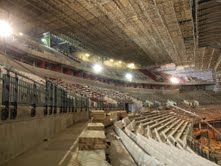 The Leeds Arena is in the news this week after it announced Leeds band The Kaiser Chiefs will be one of the main headlining acts during the two week opening programme of events, tickets went on sale today.

Colin Oliver is a director of Futuresound which operates The Cockpit on Swinegate, promotes gigs across the region (including promoting The Kaisers) and presents the annual Metropolitan music festival Live At Leeds. We spent an hour with him with a head full of questions and was easily diverted, our questions are shown as interuptions in the square brackets […] Kay Brown sat and took pages of notes.

As a music promoter what are your thoughts on the new Arena?
I was sceptical at first, but now that we’ve got a better understanding of the seating configuration it will make it easier to sell it as a venue for a rock ‘n’ roll bands. The venue is 13,500 seated but it will be able to hold 3,600 standing with 3,000 seated and the rest of the venue covered so you can’t see the empty seats. It won’t just be a music venue, it will host major tennis tournaments, boxing, comedy and big national and international crowd pleasers from London, like musicals and Disney on Ice type stuff. Whilst it won’t compete as a major conference venue, like Harrogate or the NEC, it’ll be great for luring famous celebrity speakers into Leeds.

Do you think the arena fills the gap for live events in the region?
Yes, it’s much needed. There’s been nothing of the scale of the Queen’s Hall that used to be across the way from The Cockpit. It was a converted tram shed and they used to have all sorts on. Loads of bands played there like The Stranglers, The Jam, Bryan Adams, Public Image, Suzi and the Banshee’s and The Clash. It was knocked down in the 90’s. And since then we’ve had to travel to Sheffield and Manchester to see those kinds of bands.

Leeds has changed massively since the 90’s so in a way it’s good we didn’t immediately replace the Queen’s Hall with a Sheffield-esque arena. So having waited to get it right, we’ve got an all singing, all dancing purpose built arena. It is unique in the way it is set out, and in my opinion it could be in the top 10 arenas in the world. I find it hard to believe I’m actually saying this, as I’m the first to be sceptical. I really hope it works for Leeds. But it’s the configuration of seating that works as far as we’re concerned as promoters. Everyday we are in competition with other promoters when trying to book bands in to Leeds. The most frustrating thing is bringing bands through, from an audience of 30 at Joseph’s Well {now known as Joe’s Well which is also looking like closing as a music venue it appears} to the O2 {approx. 2,300 capacity} and then there’s been a gap, between the O2 and playing at the likes of Elland Road and Roundhay Park, meaning that the bands looking for bigger capacity will look at Leeds and say ‘where’s your arena?’ And the answer has typically been it’s in Manchester! So for a promoter you take a calculated risk knowing you can lose money putting on a lot of small bands in the early days, but it’s worth it in the long term if you land the big gigs. It’s a numbers game.

Can you see why people are worried about how it’ll affect the city?
If they built a car park under the arena I could see a tailback and this would be a real problem, but in fact that they’re using Woodhouse Car Park and The Merrion and anticipate a lot of visitors will arrive by train. Those visitors will stop off along the routes to the Arena most likely spending their money along the way. Venues like this normally want to base everything in their development, so you park, eat, drink and leave. But in the case of the Arena they’ll be creating opportunities for the local businesses nearby and in the longer term bringing more people into the city.

Who do you reckon we’ll see at the arena?
It’s a difficult one. Look at the bands we could’ve taken there; The Strokes, The White Stripes, Kasabian etc, but we lost them because we couldn’t take them to an arena. [Can you project who will be an arena band?] It comes out of nowhere, if you could look into a crystal ball, you’d be a manager! Promoting becomes a game of percentages.

Of all of the bands that you’re booking, who has arena potential?
The xx. Ellie Goulding and The Vaccines have the right support behind them so I could see them doing it. Ed Sheeran as well.

Which band do you think will open the arena? (The Kaisers are not the opening act but are the first rock band in the opening weeks)
It could be anybody. The really interesting thing – is that the usual model would be to put on a massive band on and then a couple of days after the hangover has passed the moment has gone. Yet SMG (the Arena operators) plan to put on a 2 week opening programme so there’ll be different types of music and events to showcase all aspects of it.

Is there anyone you would like to see?
The Smiths. {Fellow promoter Andy Smith walks in to our chat and says he’d like The Strokes}

Who else do you think would play the first week?
Kasabian? A lot of people would be happy in Leeds if it was the Kaiser Chiefs. (and some non plussed – ED) There are not that many bands that can do 13,500 but there’s loads of bands that can do 7,000. And if you’re doing standing/seating of 7,000 you can put stuff on like Biffy Clyro, Mumford and Sons, You Me At Six and The Vaccines. It’s like anything, people don’t like going to all seated for rock gigs. They like the option to stand.