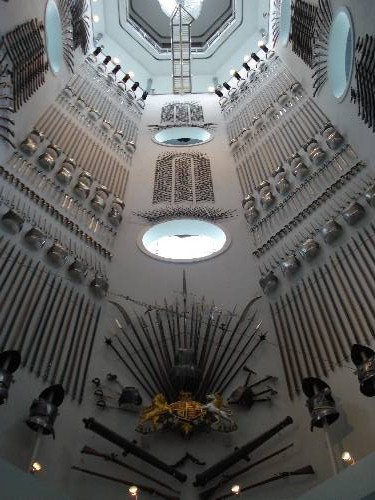 Leeds is home to the oldest museum in the UK, the Royal Armouries…   “yep, that would be yet another gun/knife/sword in a glass case…”   There is a feeling that once you’ve seen 27 pieces of weaponry, you’ve definitely seen them all. The Royal Armouries moved to Leeds in 1996 & has been threatened with closure so many times we’ve sometimes nearly forgotten it’s still open. The vague air of failure and despondency is most definitely not helped by its location. Clarence Dock, as @ivortymchak famously refers to it ‘The place where Capitalism has gone to die’. Let’s face it, you know you’re in trouble when even Starbucks moves out.

So, when was the last time you went to Royal Armouries then? Because, it may surprise you, it’s really rather good.  The museum is split into a number of floors, featuring different themes & periods. Sometimes, the definition can feel arbitrary, sometimes illuminating. The contextual explanations are not always as strong as they could be, but there is quite a lot more to look at than you may expect, & the armour is particularly impressive. I also enjoyed the Farewell to Arms exhibition, in conjunction with Bradford Peace Museum, & the moving piece on the victims of Leeds knife crime & Pat Regan, spoilt by the close proximity to unrelated audio visuals. My favourite piece has always been the explanation on the development of warfare which features a Corinthian helmet from 5th Century BC. To be able to examine a real artefact from a period that is almost steeped in legend is thrilling.

I think the secret to really enjoying the Armouries is not to do the whole thing in one go-then it can be a little bit boring & tiresome. It becomes difficult to fully differentiate & appreciate the achievements.  It’s free & it’s only 5 minutes from the city centre; go and do a gallery every now & then. Take the time to properly look at the awesome armour, examine the engravings & admire the artistry, skill & ingenuity. There are some oriental weapons in particular that deserve your time & attention to observe & admire the workmanship & beauty.  If you have children, possibly just do the War & Tournament Galleries, anywhere that has impressive bits of armour, stuffed animals & knights on horseback.

I actually meant to talk a lot more about the Armouries, I didn’t mean to go into politics in this post. I purely wanted to review what it is a museum, not to question, for example, the ethics of a museum of warfare (Friend: “imagine just what mankind could have achieved if we diverted all this energy and ingenuity into doing good for the world instead of developing new guns”).

However, an incident occurred that indicates how everything that is publically funded has to currently be addressed in relation to cuts. My pal and I aren’t fans of ‘live action’; neither of us have ever really felt the need to have someone dressed as an American Cowgirl yelling ‘yee-hah, howdie paardner’ to tell us how to think about guns in the mid-West. We, therefore, ambled about the galleries rather than attend the ‘performance’. However, an impassioned, angry voice rang out, and we stopped to listen. A member of the team at the Royal Armouries, was passionately registering their anger & disappointment at the imminent end of the Live Interpretations department.  The jousting, that major public draw every holidays, has already gone. This seems to me an extremely foolish move. I understand that it is cost heavy, but have the Armouries done all it can to increase potential revenues from this? The Armouries, particularly for some children, can be really quite dull. The live interpretation transforms a museum that is essentially ‘guns in glass cases’ into something much more interactive. The popularity of CBBC Horrible Histories programmes shows how historical interpretation can be a major attraction for all age groups. In addition, that same day the crossbow range and the play area were both also sadly closed.  I don’t believe the Armouries is suitable for young children, for a variety of reasons. But, the removal of the live interpretation makes it far less likely that families will attend the museum. In my opinion it seems to be a major draw and I suspect the many young families who have been in attendance every time I have been there will be hugely disappointed. I fear the Armouries, the oldest museum in Britain, examining one of the oldest human traits, will not survive such a decision and will not be utilising it’s unique resources in such a way as to educate and appeal to audiences.

P.S: The food is completely uninspiring. I’m sure I even spotted in the upstairs cafe a dreaded ‘push button’ coffee machine. I know the V&A was condemned for it’s ‘a great café with a pretty good museum attached’ slogan, but they did have a point.