A week ago I moved back to Leeds after more than 30 years away. I’d been back regularly, of course, but there are things you can experience as a resident that you are never the same as a visitor. The first of those new joys was Light Night.

With some 50 events scattered around the city centre, from the university to the Corn Exchange, it was nigh on impossible to take in every one. But simply wandering around – and Leeds was certainly bustling after five, only growing busier as the evening progressed – brought many pleasures.

The most visible, and most publicised, was Momentous, the projection onto the Civic Hall of the workings of a Potts clock (of course – Potts was a Leeds company). As each quarter hour chimed, the display changed, one time showing dancers, another it was bell ringers. Absolutely glorious and the crowds rightly gathered to ooh and ah.

St. John’s Church, the oldest in the city, was open for an a superb art installation of light and sound, which just across the churchyard, Age UK offered something different, Tiny Spaces, music and light (sense a theme here?) to take the view – in a tiny space, naturally – to a distant universe before finishing in the rather lovely Arch Café.

The Light had a booth for Love Arts, with the opportunity for visitors to write their own thought which would then spiral up a pole in the building. Superb paintings on display and some very good live music from a singer-songwriter whose name I never caught, sadly.

Slipping through the Victoria Quarter (and I know I’m old school, but I do hate that; it’s such artifice, but then maybe that fits in with the pretensions of Harvey Nicks) there was a chance to hear the Leeds Festival Chorus. Their take on the old circus theme – it probably has a real name – was wonderful, light, and completely in tune with the running away to the circus theme of much of the evening.

Down at the Corn Exchange there was grand fun for children, with the chance to build robots out of cardboard boxes. It became a feast of the imagination, although it did seem to be parents doing more of the work. There’s a sort of Blue Peter lesson in it, too, that sometimes the simple things, using stuff that’s just sitting around the house, can let the mind soar and fly. Really, it was a pleasure to stand on the balcony and watch each robot grow and take shape. 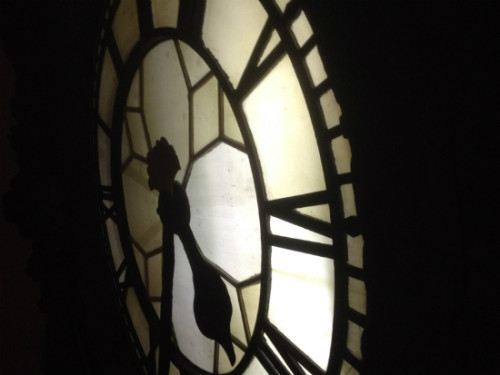 But the absolute highlight, for me at least, was the chance to climb the clock tower at the Town Hall. 209 steps makes it a bit of a pull, but worth every pant and grunt to stand just under the clock face and take in the panorama of Leeds. In the darkness it was difficult to pick out much, but that wasn’t the point. It was simply the view, even of the strange silver-wrapped car in front of the Art Gallery and the gymnastic display in outside the Hall itself. Awesome, in the very best sense of the word.

I came to Light Night not sure what to expect. I was open to be wowed, but time and again I was knocked out. Not just by the efforts of all the participants, but also from the large crowds who came and took part. There was a real, vital sense of community about it all, a feeling that Leeds is more than a name and a disparate group of people. It’s living, it’s vital, and growing. Light Night 2013? Fabulous.

Chris Nickson was born and raised in Leeds, then vanished for 37 years to become a music journalist and writer. He’s the author of the Richard Nottingham series of mysteries, set in the city in the 1730s, and Emerald City, which takes place in the Seattle music scene of the 1980s. He’s just very happily returned to Leeds, rescuing his partner from Nottingham.