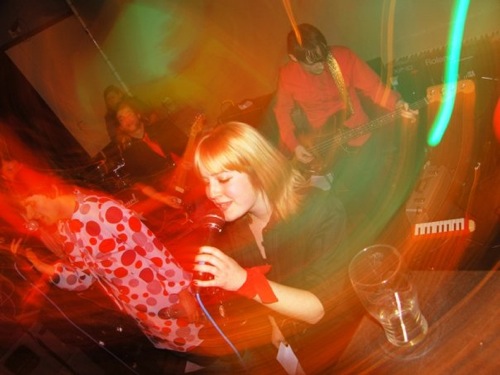 The Seven Inches have been knocking around the LS6 music scene since i was a student, which is a frighteningly long time ago now. Headed by the wonderfully whimsical lyricist Ian Cockburn, the band made their mark during the gojonnygogogogo days contributing to a unapologetically fun music scene alongside contemporaries Plouf! and former noise-mongers The Real Losers. Song topics cover the spectrum between international dialling codes and lost ponchos, cartoons and pen-pals, all delivered by a singer in a waistcoat, dress or feather boa depending on the mood. Niche isn’t really the right word – this is not an elitist, pretentious, cleverer-than-you-are band – being a Seven Inch is all about making friends and sharing experiences. Think The Moldy Peaches, Noel Coward, Le Tigre and Jonathan Richman and you’re half way there. Honest yet humourous pop songs complimented by a dash of theatre, home-made props and unceasing energy makes a gig about more than just music.

i caught up with Ian ahead of the next Seven Inches gig to talk about craft shops, Lewis Caroll and DIY gigs:

* i’ll always associate you as being part of an LS6 music scene, meanings loads of friends together, DIY with a collaborative ethic – would you agree with this? would you say living in this area has influenced you at all?

Yes. When we started most of our gigs were put on by our then keyboardist and singer Alice, who was already a DIY gig promoter, and our other gigs were also put on basically through people we’d met through the DIY scene. And yes, I’ve found the bands who play those kind of gigs in Leeds a huge inspiration, in particular the Manifesta feminist collective and bands like Jean Genet. Music done out of love rather than being slanted to what’s selling (hard to articulate that without sounding self-righteous). It must be said though that I don’t know if other members of the band feel this way, I sense they think the DIY scene, like any scene can be a bit cliquey. But we would certainly never do a pay-to-play gig, or anything like that. So we’ve never “made it”, but at least we’re still together, and more importantly still friends.

* give us a bit of an idea about how you got the band together, how do you know everyone?

We’d been friends for a few years before we started. The original line-up was me, Shaun (guitar) and Alice (keyboards and vocals), and right from our first gig Emil was doing a guest trumpet on one song, he later became an official member. Very soon we got Tim on bass and Nigel on drums. Alice and Nigel both moved away in 2004, and they were replaced by our friends Emily and Lucy initially, who after a couple of years were replaced in turn by Dr Emily and Rachael. The way it’s worked out is that all of our drummers were strangers or mere acquaintances, I suppose it’s because drummers are so scarce and highly sought after, so when you need a drummer it’s less likely you’ll find one in your existing circle of friends.

* How about your job in the craft shop: do you feel the need to be surrounded by arts and crafts? Does that feed into your onstage costumes and props and art work?

Yes, most props I use are made from stuff in Craftwise, notably the foam fake guitars I pretend to play, which were originally cardboard but you can’t fold thick cardboard so easily and hide it in your bag. I don’t know about “feeling the need” to work somewhere like that, I’ve never tried working anywhere that wasn’t craft-related, so I don’t know. Except when I was a dishwasher, which was cool too because you get time to think. Basically though, yes I am an arts and crafts kind of person and always have been, it’s my nature. [Ian also contributes to and produces local anthology comic Sea Mouse

* There’s a hint of cabaret in your performance. Y you use humour but poetry too in your lyrics. You sing a lot about writing and i know you draw so who are you influences other than musicians?

Everything I’m into I hope to somehow channel into my songs at some point, though perhaps less so them heavy people, I mean the serious stuff, as I don’t feel qualified. So it’s more light, humorous or whimsical literature that I end up reflecting. I’ve loved Lewis Carroll and Edward Lear since I was so high, and am fascinated by how nonsense is sometimes sublime but sometimes just nonsense. It’s my ambition to write the sublime nonsense, not the nonsense nonsense. Our song Cashback contains lyrical nods to Lewis Carroll and P.G. Wodehouse, which hopefully fans of those writers will spot but no-one else will notice at all. Our single Open-ness and Honesty pays tribute to the autobiographical comic artist Ariel Schrag. I think people like it when you mention specific things rather than being vague and universal.

I can’t think of how painters have influenced our music, though I sing about them a fair bit. (I’m working on songs about Bruegel, Giotto, and Gustave Doré at the moment.) Comedy more so, though it’s a thin line to walk between having comedy in your show and being seen as a comedy act. There’s nothing wrong with comedy acts, but I don’t want us to be one as I like to do serious songs too, and I’m not funny enough to be funny all the time.

May I cheat and also mention some influences who are musicians? Because they’re not only musicians, and hence are role models for my dilletantism: Vivian Stanshall and Jeffrey Lewis. The visual side of our shows also owes a debt to David Devant and his Spirit Wife and a band called Plouf!

* Your lyrics are very open and honest about how you see yourself and how you feel about others, almost like reading someone’s diary. Do you find it easy/cathartic to write in a personal style? How do the other band members feed into this?

The other members of the band generally let me write what I like, but once in a while one of them might tell me a certain lyric is self-indulgent, or contentious, or depressing or just plain bad. Which is great, because too often us lyricists get the impression it doesn’t make a blind bit of difference to what we sing, as far as most people are concerned. It’s good to get feedback.

My autobiographical style of lyric-writing is inspired by my hero Jonathan Richman, most of whose songs are autobiographical (except the mid-70s childrens’ songs, and even some of them). I even considered, as some kind of DOGME-style discipline, only ever singing stuff that was true, and not even using any poetic licence. But I gave that up, because there are lots of lyricists I like besides Jonathan Richman, and most of them invent stuff, so now I’m more likely to create a character or invent a story. But if what’s inspired me to write the song is something in my own life I try not to fictionalise it too much. If you have that material right there in your life, you don’t want to make it less real and therefore less powerful. Sometimes those kind of songs can be near the bone, particularly if someone they’re about is in the audience, but I can be pretty shameless. It’s the extrovert/introvert thing.

* You also have an anti-solo project on the go. is it important for you to collaborate with other people, do you view making music as akin to friendship and sharing experiences?

Yes, music is very social and convivial, and I can’t really do it on my own, and I’m always wanting to collaborate with people. That’s the wonder of bands, people with different sensibilities and skills coming together to create something that individually they would never have been able to have imagined. Plus I have to do the anti-solo project since the Seven Inches don’t want to play all my songs, the scoundrels. Thanks for using my phrase “anti-solo project”, by the way, I’m hoping it will catch on.

What are you favourite memories of being in The Seven Inches and the people you have supported?

Probably our most prestigious gig was with Calvin Johnson, Herman Dune and the Cribs all on the same bill at the Brudenell Social Club. Sadly we had to do that one unplugged as our drummer was absent. My favourite gig was another acoustic gig though, totally unamplified in the guard’s carriage of the train at Indietracks festival in 2008. Or maybe my favourite gig is still our debut in 2002, because it was my first gig in any band, none of our friends had a clue what to expect, and they all seemed delighted and very surprised. We were supporting Dressy Bessy and Saloon that night and Tammy from Dressy Bessy was so nice to us, I gave her my first cardboard guitar. [Read the review]