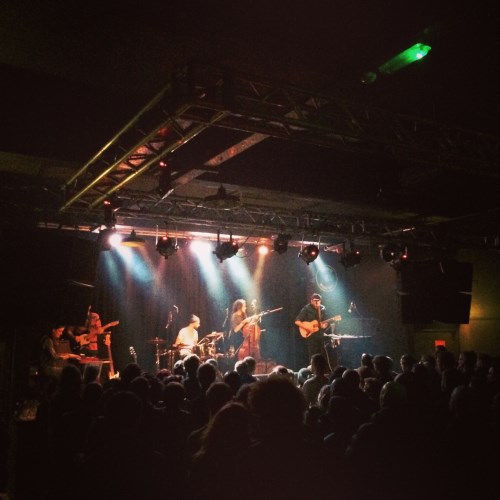 Icelandic band Múm have a subtle line in fragile folk with a background in ambient and electronica, all cellos, keyboards and samples. Their music is sometimes sparse and desolate, sometimes rich and warm, but it’s always fragile and quite beautiful.

Múm played at the excellent Belgrave Music Hall a couple of nights ago, and I stood and watched this unusual little band in this unusual little venue, an excellent addition to Leeds’ live music scene … worn, stylishly battered, but welcoming and open … it feels like it’s been at the top of town for years, rather than just the few months it’s been open, although I felt conspicuous in not having a full beard and sleeve tattoos, but both those deficiencies can be rectified.

The band lurked in the shadows for much of their set, backlit and shrouded in smoke, five figures silhouetted against the back of the stage. Their strange, melodic bleeps and tones moulded together into music that rode across the room, reaching ghostly fingers into a transfixed audience, their soft voices backed by sampler, keyboard, drum and guitar. At one point, they descended into just whistling, passing notes between each other and the audience in a hypnotic frame that may have gone on for hours for all I know, because I found I’d drifted far away by the time the crowd started to clap.

I’ve slowly fallen for Icelandic music. I’m not just talking about the odd Sigur Ros album that everybody seems to have kicking about, mainly because of that sweeping track off the nature programmes. I’m talking about their entire back catalogue, solo work, film scores and a collection of music by their friends and fellow Icelanders that’s rapidly spidering out across the country’s frozen landscape and beyond.

Iceland represents a rich hunting ground for anybody who likes slightly idiosyncratic and offbeat indie/folk of the more experimental and obscure variety. It’s quite astonishing that an island with such a small population should produce such a wealth of musical talent … one band just leads to another, to an obscure record label, to a niche blog, and so on and on.

A couple of bands stick around, though. A few have become mainstays. Sigur Ros is one, a band of such colossal ability and skill that I’d perhaps rank them high in any list of ‘best live bands I’ve ever seen’, if I were the sort of person to make such lists, which I am. I found Múm through reading around a couple of Icelandic music blogs and nosing around Icelandic record label websites.

Most of Múm’s set came from their new album, Smilewound, their first for a few years, and a departure from the verging-on-hardcore ambient of previous records. Smilewound is more musical, warmer, not necessarily more commercial, but certainly their most rounded collection of music.

There was a technical hitch halfway through, prompting talk of DI boxes and much swapping of leads, a look of quietly rising panic on the face of the woman looking after the sound desk (I’ve been in her seat – it isn’t pleasant), but things were fixed quickly with a little fiddling around and some typically whimsical and off the wall crowd banter – ‘I’ve been in Leeds for less than … one day, and we went walking this afternoon. We found the Christmas market. Our first taste of Christmas!’.

Múm’s set was full of heart and texture, their sparse and sometimes choppy beats layered with cello and mandolin. The real beauty when this type of indie crashes into ambient music is in the restraint and the spaces inbetween, in the way that a band moves as one unified whole with a confidence that only comes from real feeling and understanding.