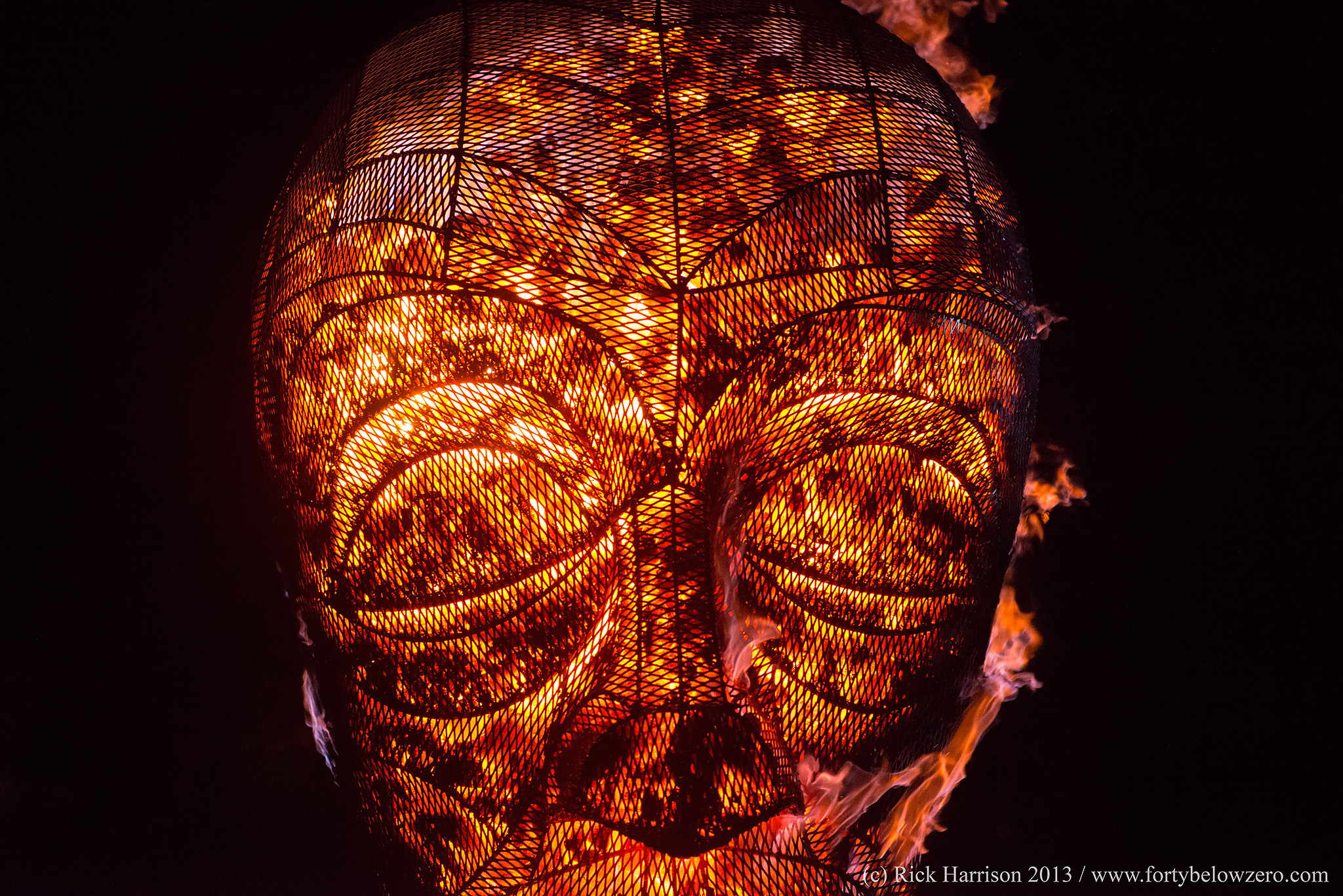 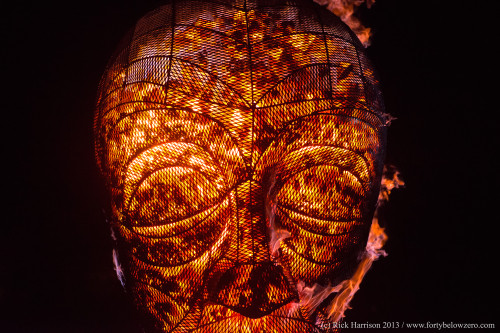 The Friends of Yorkshire Sculpture Park have been treated to some very good member-only events of late, the latest of which (last night), was an exclusive viewing (or should that be Burning) of the final Part of pa-BOOM’s art-council funded Research and Development project ‘Hot Heads’.

The project was designed to create, build and test a series of large-scale sculptural human head charcoal fire sculptures, with this event being the finale, the first public viewing of them being set alight.

Armed with a warming cup of complementary hot chocolate and a lovely slice of parkin, we left the bright, safe confines of the YSP cafe and headed out into the dark, quiet woods along a tea-light lined path to the burn site, in a clearing a short walk away.

Eyes still re-adjusting to the darkness you couldn’t quite make out the heads too well – rather you sensed that there were 3 giant metal-mesh heads on pedestals, each with a tiny roped off area around them stopping you getting too close. 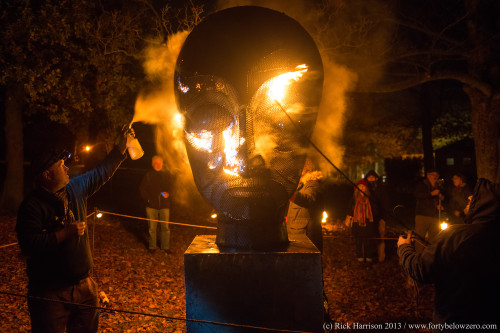 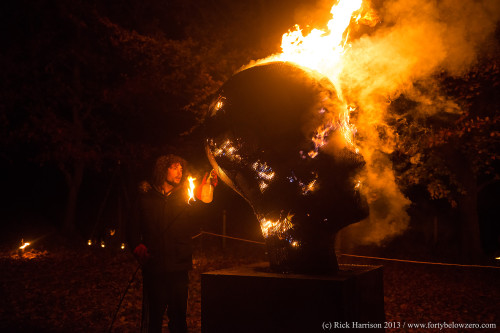 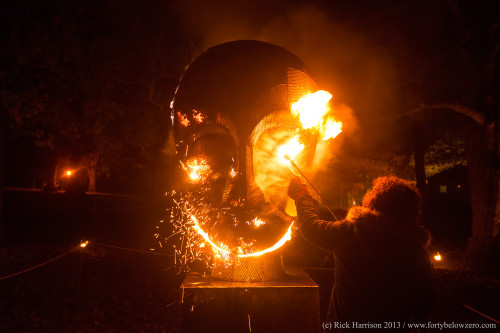 And so The Burn began – each head was ceremoniously lit through a combination of a Burn-y- stick, and copious amounts of lighter fluid in a spray bottle. Each head (and they were huge) was filled with enough charcoal to deprive a small town of a summers worth of BBQs – the heads were huge, and packed full.

They were quite reminiscent of Juame Plensas work (still my favourite YSP exhibition of recent times), infact the leaflet we were handed upon arrival states they were inspired by plensas’ alabasta heads, along with the death mask of William Blake, peat bog bodies from Denmark, the stone heads at Mount Menru and Cletic stone-carved heads.

For me one of the greatest parts of the experience was seeing how the heads changed visually over time – in the beginning the patches of flame and ember looked like scars or like the heads were coming out with a nasty rash, and over time the whole head turned to flame and amber, like they were modelled from pure lava. Over a couple of hours, the burning embers slowly started to decompose giving a whole new aesthetic where it was almost like looking into the head and seeing a brain. 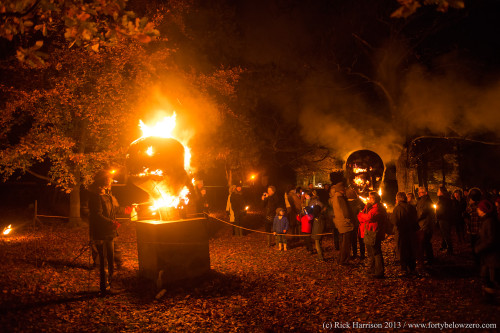 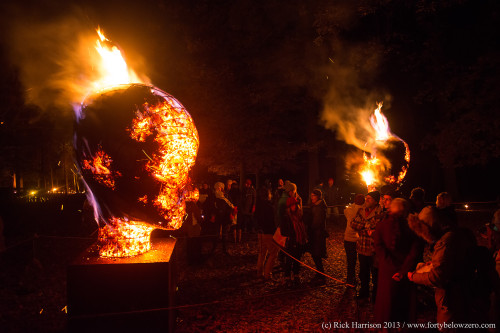 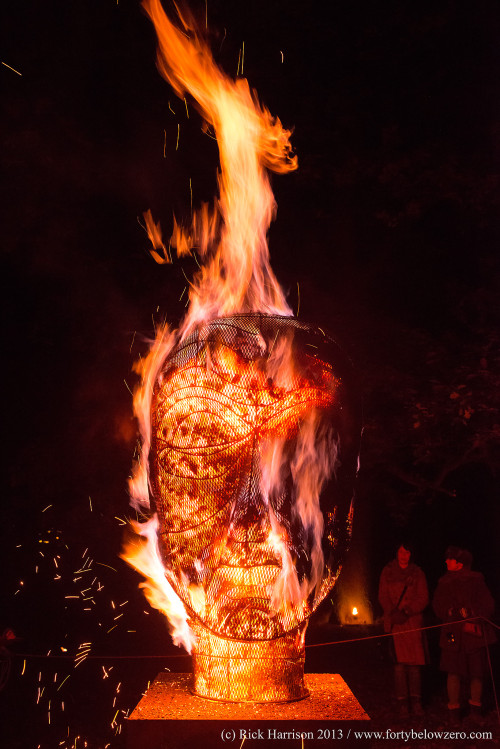 Theres also something tied to the human psyche with fire – a base human desire to bask in it’s warmth and watch the mesmerizing patterns it produced. In fact it generated so much warmth when I left it’s glow to venture to the edge of the clearing for a wide shot, it was like i’d been transported to siberia. The fact that were 3 of them arranged in a circle (or should that be triangle) meant people naturally gravitated to standing between them. taking comfort in the warmth and lit sanctuary surrounded by the dark foreboding woodland.

I’m really looking forward to see what pa-BOOM do next – this was just magical and seems a shame more people couldnt experience it (tho it did benefit from being a relatively small group of people, felt quite intimate). It was only subsequent to getting home afterwards i realised i’d seen their work before – if you’ve been to the Marsden Imbolc festival or Slaithwaite moon raking festival you’ll be familiar with their fire sculptures. 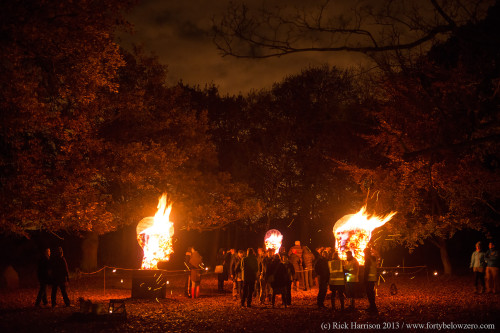 I’ll finish with a final bit of crediting:

The installation was created by pa-BOOM (www.pa-boom.com), with artistic director David Chadwick and artist Dave Young of Transmutation, with funding by Arts Council England and developed in partnership with Yorkshire Sculpture Park.

Rick Harrison is a web developer who does the occasional bits of freelance photography too. He particularly loves photographing strage/interesting/challenging events and English traditions, you can find his website at www.fortybelowzero.com, his flickr photography stream at www.flickr.com/photos/sovietuk, and follow him on twitter @sovietuk (tho he’s been a bit crap and not been using it much of late :-s)