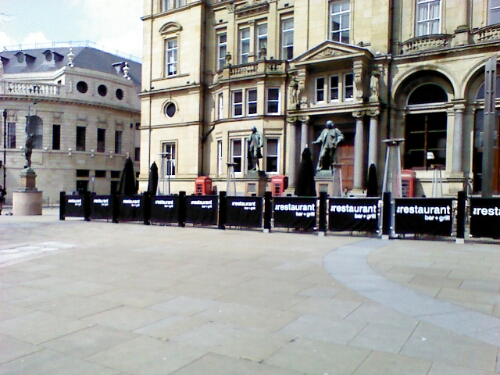 Last night’s City Series film at Hyde Park Picture House was a bit of an anomaly. So far the films chosen have showcased influential architects and urbanists and shown the way good, thoughtful, “human scale” built environment can make for better cities. It’s been a positive message. Leo Hollis chose The Arbor, about Andrea Dunbar, a playwright from a poor estate in Bradford who died from a burst anuerysm tragically young on the floor of a pub toilet. From then on things got progressively worse. It’s a true story told in the actual voices of the people who lived it and it is genuinely harrowing.

I thought it was an odd but brave choice from Leo. He wrote a book called “Cities Are Good For You” (which is just out in paperback, I’d recommend you get yourself a copy) and when we originally got in touch with him about the prospect of choosing a film and coming up to Leeds to introduce it I expect we thought he’d choose something a bit cheerier. I’m glad he didn’t. Any conversation about the future of the city and how we can make things better for everyone who lives here has to face up to the shadow side of the urban dream. The Arbor not only is a terrific film it will make you think.

We generally take our speakers out after the show for a chat over a drink and a bite to eat. Previously we’ve been to places such as The Reliance and LS6 Cafe. Last night we hired the back room at the Brudenell Social Club and asked Dave from Sunshine Bakery to sort us some pies. Where will we take our next speaker I wonder? The Duncan for a bag of pork scratchings? The General Eliot for a fight? I’m not knocking Dave’s pies (we all know Dave makes the best pies in the country) or the Brude (it’s won awards, and deservedly so) but most of our speakers aren’t from up North. I do wonder if they entirely get it.

Anyhow, the great thing about these City Series Leeds events is that you get to see a good film in a marvelous venue introduced by an interesting speaker, and then get to chat more informally after over a beer or two. And the discussion yesterday was fascinating.

Leo’s book is basically a narrative about how cities are expanding in size at an outrageous rate all across the world. The figures he quotes are frankly mind boggling. I genuinely can’t get my head around what a 20 or 40 or 60 million person sized city would be like. Who would want to live there? How could you even feel part of that? And what sort of place would it be? But that’s the future and we have to deal with it. A couple of questions in the after film discussion circled around these ideas.

Jane Jacobs figures prominently in Leo’s narrative. She’s one of my heroes too. But I think there’s something problematical about her presence here, and it was brought out by one of the questions from Simon from Leeds Society of Architects. The reality is Jane Jacobs built nothing. Her main enemy, Robert Moses, was a visionary who built modern New York – New York is one of the cities Leo keeps coming back to, and it is the dominant global power it is because Robert Moses built stuff. And not just the bad stuff we associate with him (mainly highways that destroyed working class communities), he built playgrounds and parks and hospitals and universities and cultural centres and bridges – interestingly he built bridges tall enough that buses could get under, so the poorer citizens of New York could access the stuff he built. Simon’s question was basically, if we cede too much say over city design to the Jane Jacobs of the world we risk mediocrity. You can’t design brilliant buildings by committee. Without architects to do what they do unimpeded and without dilution there is no city. Streets don’t build themselves – well, apart from slums I suppose.

I’m still not sure how I feel about that. My question was a more personal one. If the future is these mega cities, of tens of millions, where does that leave Leeds? We are a mid-sized, middling sort of place in the middle of the country … are we fucked? Should we all be on a plane to Mumbai, I asked.

Leo was honest, and said he’d kinda skirted the issue in the book. But he thought that the main way cities like Leeds could survive was by connecting to other cities. Transport links were crucial.

I like this idea. I love Leeds. I love our neighbour cities up North (yes, even Manchester) and I like how so close we are and yet still so different and distinct. There’s a definite sense of place in Sheffield or Wakefield or Doncaster or Hull – and never tell anyone in Morley they are from Leeds!

Yesterday morning I spent a couple of hours at City Connect Advisory Board. City Connect is building a cycling and pedestrian link between Seacroft in East Leeds and the centre of Bradford. I got involved because I was sick of moaning at developments in the local area I thought had got it wrong once they were up and built – this was a chance to get involved in the actual design process, from the beginning. A chance to take a bit of responsibility for how the city develops.

One of the funniest quotes from last night’s discussion – voiced by an architect! – was that “everyone can read plans”. Well, I can’t read plans. Plans may as well be in Cuneiform as far as I’m concerned. That’s true for the majority of people, and it’s not laziness, we just don’t see things that way. But the City Connect consultation process is about walking the streets, talking to locals, getting the designers and engineers to walk our streets with us and see what we see, share our frustrations with the way the built environment works for the people who have to live with it, day in day out.

For me City Connect blends Simon’s concern for the best design possible and Leo’s idea that neighbourliness is the glue that holds a good city together. And it’s really just beginning. So, if you have been to any of the City Series events, or if you are just interested in any of the ideas why don’t you get involved in the consultation process? The whole point of City Series Leeds is to encourage more people to think about the city they live in.