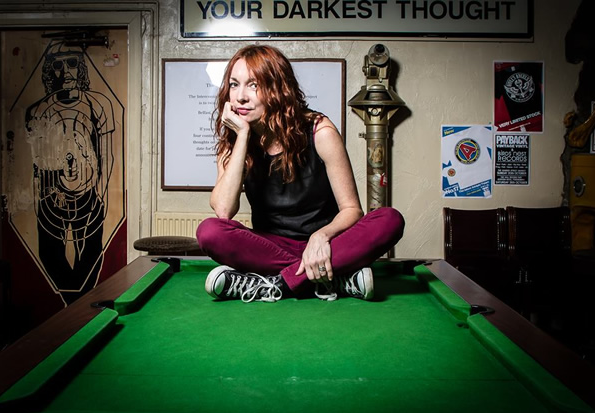 ‘That new album from Patsy Matheson is bloody wonderful’ – Chris Nickson, Novelist, Music Journalist, Biographer, interviews Patsy Matheson ahead of her gig at Korks in Otley …

Patsy Matheson is a Leeds treasure. She might have been born down South, but she’s lived her long enough and been such a vital part of the Leeds music scene to qualify as a Yorkshirewoman. Even before she arrived to study a Leeds University, she’d been playing guitar and writing songs. But it was Leeds that really sparked her.

“I set up a folk club at uni, because there wasn’t one and they’d give you a grant,” Matheson recalls. “Then a friend took me down to my first session at the White Stag in town. That was a revelation. I didn’t know it, but Leeds was a centre for traditional music then. After that, the friend of someone in my halls came through with his band – they were based in Manchester. So there was all this music.”

After graduation, she began working at a new Leeds venue, the Duchess of York, which run by Mick Longbottom.

“He wanted to call it the Marquee,” Matheson remembers, “but the owner of the Marquee threatened to sue. Then it went through several names before he settled on the Duchess. I booked local acts from Sunday to Thursday, and John Keenan did the rest. My first gig there was opening for Nico.”

She became a regular performer there and at the Irish Centre, then in 1991 won the Song for 91 contest. But it wasn’t until ’96 that she released her first CD, With My Boots On, took the plunge and became a full-time musician – one of her earliest gigs was at Glastonbury.

Matheson put her solo career on hold for four years to become a member of Waking the Witch, a band that won rave reviews and toured all over the UK, taking up her mantle again in 2008.

“I was really lucky. Clive Gregson went on the road with me, just accompanying me on electric. One of the gigs was a festival up in Lanarkshire that a friend had organised. We were in a pub, by the passage to the toilets. Clive just looked at me. But it turned out to be one of the best gigs I’ve ever played. I’m going back there this year, playing with Dougie MacLean.”

Right now, she’s on the road again, touring for her newest album, Domino Girls, her most accomplished to date, where the songs not only have hidden depths (“No Contract,” for example) but also local references (“The Hollies”).

“I feel I’m really hitting my stride now,” she says. “I love what I do. If I ever reach the stage where I don’t, I’ll stop.”

Thankfully, stopping altogether doesn’t seem likely. And even if she does, she’ll still be certain to fit in her local gig at Kork’s in Otley on May 16. She’ll be joined by double bass player Jon Short and cellist Sarah Smout, both of whom feature on Domino Girls, with Georgette Hilton (Ronnie Hilton’s granddaughter, for those who’ve been around a while) as support.

(And if anyone would like review tickets get in touch wearetheculturevultures@gmail.com)