Watch this. One of the greatest writers of the last century talking about that book of his we probably shouldn’t even mention (it’s one of the 80 Books No Woman Should Read.)

Listen to him. Nobody would or could talk like that these days. Nobody would dress like that either – well, maybe Jacob Rees-Mogg, but that’s not saying much. But just listen to Nabokov for a couple of minutes, and watch him carefully.

“I do not… I don’t wish to touch hearts,” he says in that unearthly accent. “I don’t even want to affect minds very much. What I really want to produce is that little sob in the spine of the artist-reader.”

What a sentence! My spine certainly teared up when I heard him say that. What an unspeakably perfect utterance. Most of us “artist-readers” would struggle for months to craft such a delicate petal of a line, and there’s that Nabokov sprouting beautiful blossoms as naturally as roses come to a rose bush.

But hang on. What’s he looking at? And what’s he got in his hands?

The devious old trickster has been reading from a prepared script all along. He’s reciting. And that’s cheating, isn’t it? Disappointing at the very least. He’s been booked to talk off the cuff, engage in a genuine conversation, not deliver something that he may have been sweating over for weeks, tweaking and tightening, sharpening and polishing, just to get the words absolutely right.

Listen to him again after they move away from that table and he puts away his index cards. He’s articulate, certainly, and can handle any question the guy with the B-Movie-baddie tash throws at him, but he frequently trips over his words, garbles his sentences, mangles his meaning. His thoughts don’t cause your backbone to blub like they did in the first bit of the video. In fact he sounds much like the average guest on the average podcast you’d find anywhere today. Good, but I’d prefer to read Nabokov’s published work rather than listen to his unpremeditated prattling.

Why should we expect a writer, even one with the genius of Nabokov, to be any better in conversation than anyone else?

William Hazlitt, a writer not known for his social accomplishments, made no apologies for not having the gift of the gab. “An author is bound to write — well or ill, wisely or foolishly,” he asserts in the first sentence of his wickedly funny “On the Conversation of authors”. “But I do not see that he is bound to talk, any more than he is bound to dance, or ride, or fence better than other people. Reading, study, silence, thought are a bad introduction to loquacity.”

His argument is straightforward: “In all things there is a division of labour. A lord is no less amorous for writing ridiculous love-letters, nor a General less successful for wanting wit and honesty. Why, then may not a poor author say nothing, and yet pass muster?”

Hazlitt was not the most balanced and judicious of writers. He would not have successfully gained a post-graduate journalism qualification. He takes up one side of a subject and beats the daylights out of it, batters it dizzy, till you are rendered speechless against his barrage of wit, invective, invention and sheer lunacy. But, hell, the man can write like an angel (well, a fallen angel; he was no saint.) And his position here is that writers aren’t fit to do anything besides scribbling; don’t expect a writer to cook or dance or have proper table manners or even be able to leave a room without embarrassing himself. “He is too refined for the vulgar, too clownish for the fashionable… Introduce him to a tea-party of milliners’ girls, and they are ready to split their sides with laughing at him.” 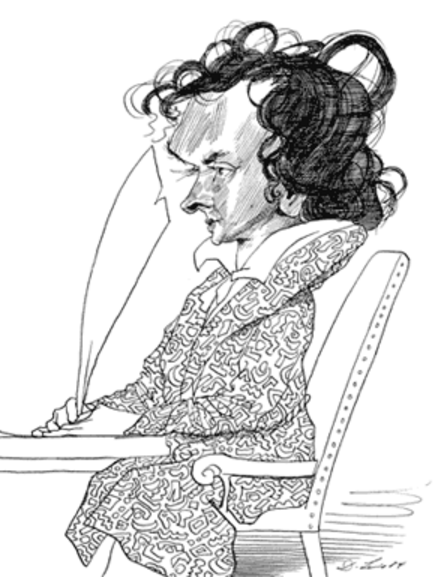 Hazlitt is obviously having a lot of fun putting down his own profession. And he is exaggerating for the hell of it. But I think he does have a serious point beyond all the literary rodomontade; writers who impress on the page may not necessarily impress in person.

I’ve been thinking about Nabokov and Hazlitt all week, since I had to speak to a bunch of post-graduate journalism students at Leeds Beckett University the other day. A talk and a podcast.

I wish I’d gone as prepared and practised as Nabokov but probably came over more like the hapless Hazlitt.

Talking really doesn’t come as naturally to me as writing. As soon as you put me in front of a group of people and ask me to do as simple a task as explain what I do on Culture Vulture I can feel the neurons in my brain shutting down in waves like the lights in a big city before an alien attack begins in a Hollywood disaster movie. But clear the room, shut the door and put a pen in my hand and it’s as if the flying saucers have all been destroyed, the Martians repelled and the hero has restored the basic utilities. I simply function better and smarter when I write. And that’s no exaggeration!

Therefore I can’t say I’m exactly looking forward to listening to the podcast that will be on Leeds Hacks website soon. In my head when I write I sound like Laurence Olivier before the gates of Agincourt – which, funnily enough is my party piece if I’ve had one too many. But out loud, and on tape (and yes, I am aware that no actual tape was used in the recording; it’s just an expression) I sound more like Wallace who’s been out to a wine and cheese party with Gromit and not had enough cheese.

As I think I mention in the podcast, my weakest writing skill is endings. I’m hoping that bit will be edited out. In fact I’m hoping all my blather is edited out and it’s just Neil, our co-editor talking. He does that so much better than me.

Admit it, he does.