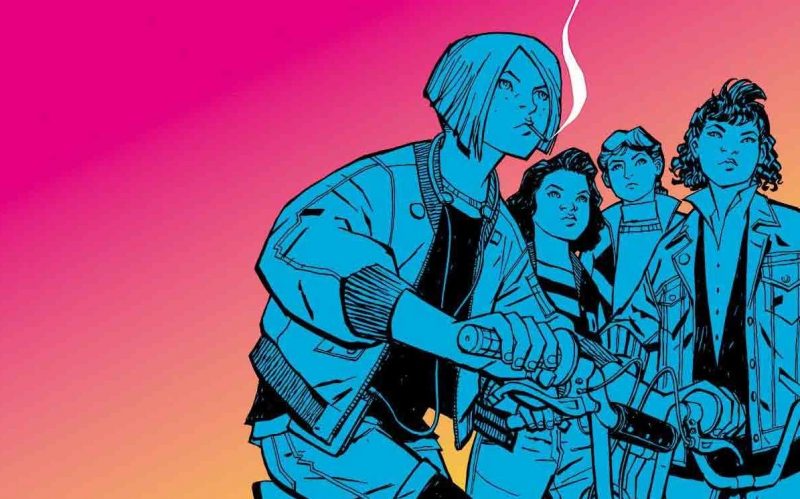 Comic writer BRIAN K VAUGHAN, author of Y The Last Man, Saga and time-travel mash-up Paper Girls talks to MARK E JOHNSON about why the 80s are still with us today… in more ways than one.

“We did seem to beat Stranger Things to the punch,” Brian K Vaughan says. He’s not being a braggart. Although he’s one of the most successful writers working in comics, he’s humble and enthusiastic as we drink beer across the road from one of Thought Bubble’s marquees.

He’s responding to my line of questioning about Paper Girls, a series he created with artist Cliff Chiang. It’s a series about four delivery girls in the 1980s and the wide screen weirdness they encounter one morning. It’s nostalgic in content, modern in style and very on-trend whichever way you look at it.

“And the new IT movie is set during the 80s,” he goes on. “It was inevitable, I think. Not only because there are a lot of creators and audience members who came to age during the late ’80s, but because the world that we’re living in now, politically and culturally, started back then.

“The forest that we’re all lost in, those seeds were planted back in the ’80s. So I think it’s inevitable that we’d be looking back and trying to figure out where we came from.”

Vaughan started his career writing assorted bits and pieces for Marvel (something almost unheard of in today’s industry) in the late ’90s. He really made his name, however, with series such as Y The Last Man and Ex Machina under DC and Runaways (a TV adaptation of which is about to start) for Marvel. After spending a few best-forgotten years in TV, he’s his own boss now, writing original series on which he’s only answerable to his collaborators.

Paper Girls probably wouldn’t have seen the light of day if he’d had a publisher looking over his shoulder. It’s strange and unpredictable and, 16 issues in, it’s still difficult to say what it’s about.

“We wanted it to be the kind of book that I love,” says Vaughan. “Comics is the last place where you can go into a story and not already know exactly what to expect. Film and TV are so expensive that they need to let the audience know up front exactly what you’re going to get. Comics, you can still be surprised.

“But yeah, we wanted that to sneak up on readers for sure. We wanted you to first fall in love with the protagonists and then hopefully be as lost as the girls are for a while and then sort of gradually uncover the mystery behind the book.”

Paper Girls is certainly braver than most Hollywood fare, both for its narrative swerves and the fact it stars four female protagonists. That’s a statement that Vaughan would probably lament, however. Gender is front and centre in Paper Girls and his other current ongoing series, Saga, created with artist Fiona Staples. His most direct approach on the subject, however, was Y The Last Man, which wrapped up in 2008. Vaughan is a little depressed that the landscape of gender hasn’t changed more in the intervening years.

“Hillary Clinton’s mentioned in Y The Last Man and we’re working on this FX adaptation at the moment,” he says. “When we started we thought, ‘Oh, Hillary will be president by the time this comes out’, and obviously it didn’t happen. I think that writing about gender, sadly, hasn’t changed as much as you would have hoped because the patriarchy, which I’m a part of and very much a beneficiary of, is still very much in power. I’m grateful that there are more talented creators who happen to be women working in comics than ever before, but sadly the state of the world hasn’t changed that much.”

*NSFW. We really did warn you.