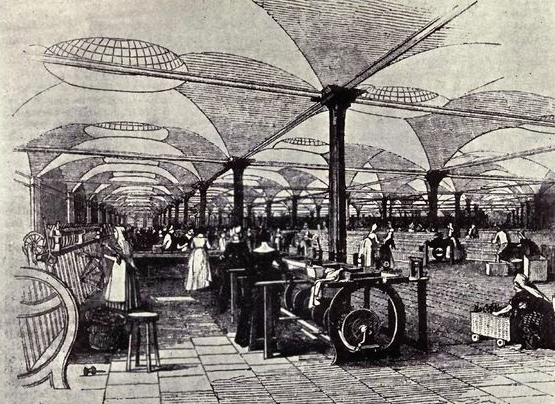 Scouring through stuff I wrote for Temple Works ages ago to contribute to the forthcoming Legacy exhibition at Leeds Central Library later this month I came across a reference to writer and Prime Minister, Benjamin Disraeli.

Apparently Disraeli visited Leeds not long after Temple Works had opened. He was on a speaking tour, taking in the Bank Temperance Society, the Leeds Mechanics and Literary Society, and the Leeds Astronomical Society. He took time out of his busy schedule to swing by South Leeds and was so impressed he included a fictionalised tribute to Temple Works’ impact on Holbeck in his state of the nation novel, Sybil, published in 1845, contrasting it with what had been there before.

Waterstones didn’t have a copy and it wasn’t in the library, but a quick Kindle search found the full text for free.

It’s strange to think that a Tory was writing such a scathing attack on the damaging effects of capitalism on the working classes long before Engels wrote about Manchester or Mayhew about London. But read Disraeli on Wogate, his fictional industrial hell-hole, in which people lived in the most miserable tenements in the most hideous burgh in the ugliest country in the world. Wogate, the thinly disguised Holbeck, is frankly a bit of a dump, To which neither nature nor art had contributed a single charm; where a tree could not be seen, a flower was unknown, where there was neither belfry nor steeple, nor a single sight or sound that could soften the heart or humanise the mind. Book 3, Chapter 4 is a masterpiece of invective. I’m sure the council did not approve. It can’t have done much for inward investment.

The bit on Temple Works is in Chapter 8. He obviously thought quite a lot of the place and the way it was run. Let’s hope the company that gets to take on the building in future treats people as well as the fictional Mr. Trafford. Nineteenth Century baronial principles sound like progress to me!

Here’s a couple of pages.

The women had a blooming cheek and drunkenness was unknown!… Well, hasn’t Holbeck changed.