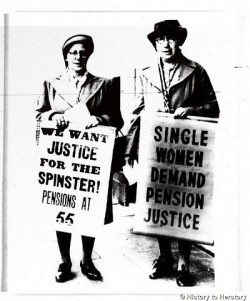 International Women’s Day passed in a flurry of tweets of best wishes, celebrations and campaigning, all with the customary #IWD hash tag. Encouraging though it is to see so many people engaging with the rights of women for a day, it made me reflect further on a book I’ve become obsessed with recently. ‘Singled Out’ is by Virginia Nicholson, who grew up in Leeds. It describes and reflects upon the experience of those women living after WWI, for whom spinsterhood and work was rarely an act of liberated emancipation, but a circumstance forced upon them by the mass slaughter of their male peers in the battlefields on the Somme.

Picture it; you’re born at the start of the twentieth century, with familial and societal expectations  of your life as a woman. Yes, these expectations will vary according to class and financial circumstances, but all classes will expect the female primary role to be as wife and mother. Many poorer women will be required to work, but there will be no status attached to that work. But, what if there are no men left to marry?  80 years later, we may seem somewhat baffled at the notion (although read any women’s magazine lamenting the problems of finding a man, and you wonder where all those decades have gone), but the lack of men to marry was a huge problem for all society. The women of the 1920-30s who had to battle for a new definition of the spinsterhood status and to support themselves in paid work are the pioneers of the status and freedom working women have today.

The book reflects on the very different experiences of the working classes and middle-upper classes, who often did not have to bear such drudgery. The upper classes were more adversely affected by the lack of suitable men, as the officer class suffered far higher fatalities, but their financial concerns, and their spiritual freedoms may be greater. I’m going to focus on the 2 Yorkshire women mentioned in the book as a reflection of the different experiences.

Winifred Holtby was born in to a prosperous Yorkshire family, became a noted novelist and journalist, author of ‘South Riding’, was an Oxford graduate and best friend of Vera Brittain. Through her employment she was able to fund and enjoy her lifestyle, and was never reduced to the tedium of relentless office work. Instead, for her, spinsterhood was less about economic necessity, but about emotional and spiritual needs. Nicholson writes that

Despite her political campaigning and reforming zeal, Winifred still worried about what she was missing, without the opportunity to love and to have children. In addition, she echoed the emotional and spiritual of many spinsters that they ‘avoid becoming embittered, narrow and prudish’. Although she died at only 37, her friendship with Vera, her writing, and her political engagement meant that Winifred believed she had lived a full and active life, but she was always aware that this was not necessarily always the life she would have chosen.

The emotional and spiritual needs of spinsters were of undoubted importance, but economic survival was urgent necessity. Singled Out tells the story of women who were awe inspiring in their pioneering promotion through the ranks, some to the boardroom itself. However, many of the stories are women who barely muddled though. These are the tales of individuals whose lives blurred into the caring of relatives, hard physical factory work, or relentless mundanity of office work, all in the desperation to finance a home for themselves in the face of anger from the public and media who believed all jobs should be for men who needed them.

Despite their deprivations, many of these women speak proudly of the group holidays, social outings they had (socialising with others was recognised by everyone to be the best remedy against the challenges and desperation of loneliness and poverty in spinsterhood). Many describe that deprivation of the soul needed to be fought against, and a woman should do what they could to remain positive, open to experiences and people, optimistic and enthusiastic. But, for many, the sheer poverty and desperation in day to day life supped all enthusiasm and energy to do anything other than survive.

One woman who was angered by the relentlessness of spinsters lives was the rather awe inspiring Florence White of Bradford. Florence went to work at Tankards Mill aged 12, where she worked 10 hours per day weighing skeins. Her colleagues were  women who had worked for 40 years in the same jobs, and died unmarried. Florence was engaged in 1916, but with the inevitability of the era, her fiancé was killed. There was no one left to marry. But, Florence was not quite like her colleagues. She was stubborn, intelligent and importantly, had a sister to financially support her and keep house. She saw the fate of their Tankards Mill friends, 3 sisters, Polly, Rose and Martha Jackson who worked until they died before they could take advantage of the state pension, and she decided that pension reform was needed.

In 1935 she held the first public meeting on the issue of pension rights for spinsters. Not the most glamorous of causes? Maybe not, but in that very first meeting 600 women attended because it was a cause that was of importance to their lives. In a church hall in Bradford, the National Spinsters Pension Association was formed. Membership swiftly grew, and campaigning was relentless. In 1940, the first major concession was granted by the Government.   “In the words of a Bradford factory worker ‘all the spinsters in England should rise today and salute her’.     Nicolson quotes an admiring couplet

This is a book full of public campaigns, personal triumphs and private miseries. It can be repetitive at times, but also heart breakingly sad. But corny though this may be, it is inspiring, it stayed in my head for days thinking about these women’s stories, and made me glow with gratitude for the lives women often enjoy today and the spinsters of the twentieth century who bravely led the way.

Singled Out: How 2 million women survived without men after the First World War. Virginia Nicholson. Penguin.