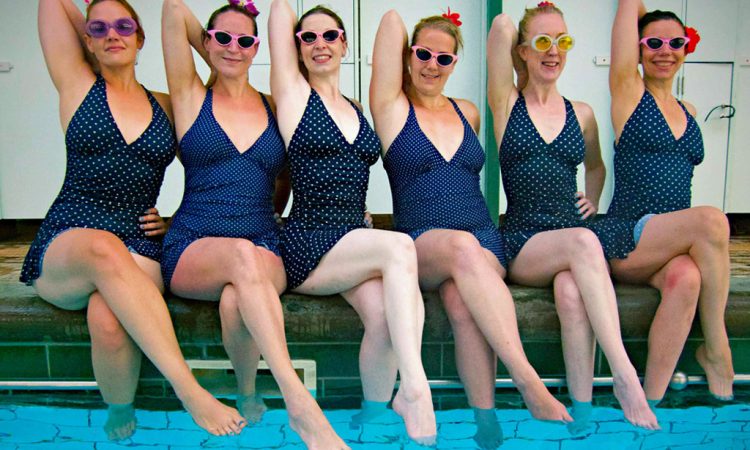 In place of a hen-party, I spent a wonderful solitary afternoon luxuriating in the gentle ambience of a female only spa. I get the same warm feeling again when I join Lucy Meredith and Zoe Parker of Yorkshire Life Aquatic at one of their sessions for Bramley Mermaids.

Lucy was involved in competitive synchronised swimming before she ‘retired’ at 18 to study drama at Wakefield’s Bretton Hall. Later, missing the pool but not wanting to compete again, she blogged her frustrations at not being able to use her full swimming skills just for fun.

Almost by synchronicity, choreographer Zoe was creating an underwater performance at Bramley Baths. Favouring “collaboration instead of competition,” the two joined forces, applied for Community First funding and Bramley Mermaids was born.

The atmosphere inside Bramley’s community run Edwardian bath-house where the Mermaids meet every week is welcoming and friendly. Set up by the two friends in 2014, sessions are an ingenious mix of synchronised swimming and choreography.

The weekly session emphasises fun and exploration, designed to include and cater for everyone’s level of ability and confidence. It’s refreshing and reassuring to see women in a pool just focused on enjoying themselves without any sense of negative body consciousness. This must be beneficial physically as well as mentally.

“Fun is emphasised,” agrees Zoe, “so you don’t necessarily feel like you work hard. The motions definitely tone and develop core strength; you’re supported by water so it’s good for people with injuries. It has hydrotherapy benefits, but we do faster movements with the water supporting you in movements you might do on land.”

The class is not like aqua aerobics, worked out on land and demonstrated pool-side which makes the moves harder to achieve in water. Lucy and Zoe develop movements in the pool itself to ensure they are accessible to all levels.

“We call it health through stealth, doing stuff that’s not boring, you can push yourself as little or as much as you want. It will incrementally improve your health.”

Lucy and Zoe team-teach every class which allows them to divide up and personalise the sessions and provide extra tuition for each ability and confidence level. The ethos of support is very important to them: “We never ask people to do things we won’t do, hence us always being in the water with the class.”

There is strong dynamic of humour between Lucy and Zoe. Their enthusiasm is contagious. They put people at ease, and clearly like to build on other people’s excitement. “This is a class based on creativity and adapting dance moves as you see what people can do.”

The pair offer as much individual support as they can, adapting routines and moves to accommodate. There is no expectation, for example, for people to put their head under water if they don’t want to. “We (have) alternative moves for (that). We want people to progress at their own pace.”

Bramley Mermaids use creativity and collaboration to perform, not compete. There are “too many rigid rules, like not having feet on the ground, (which) doesn’t make it accessible to all,” says Lucy.

Instead the pair creates performances which allow for interpretative dance in water and which work for all abilities. Generally there are two shows a year, though no one is expected to take part unless they want to. A recent outing at Brighton’s Fringe successfully showcased Yorkshire talent.

The Mermaids don’t follow pre-established set routines, often looking to the Olympics for ideas and images. On one occasion they drew inspiration from the Russian team. “We adopt a have a go attitude,” laughs Lucy. “We can always work something out.”

They readily admit some ideas work better than others, but it’s clear that fun and experimentation are at the heart of their style. “Sometimes we have to work hard to interpret movements, like exaggerating our arm movements or using the water to literally make a splash and be dramatic. We did Michael Jackson’s Thriller for Halloween which worked really well.”

Things are moving forward. Having been run by Lucy and Zoe as Yorkshire Life Aquatic for five years, the Mermaids formed its own committee last year making it more participant lead. The group is now able to fund raise, host socials and organise attendances at events.

As the class ends, I am struck by how much fun everyone’s been having – including me and I was only watching!

People have enjoyed the water, each other’s company, problem solving a crazy circle idea and showcasing a section of their new routine. They leave with smiles, an air of well being and a wonderful warm feeling.