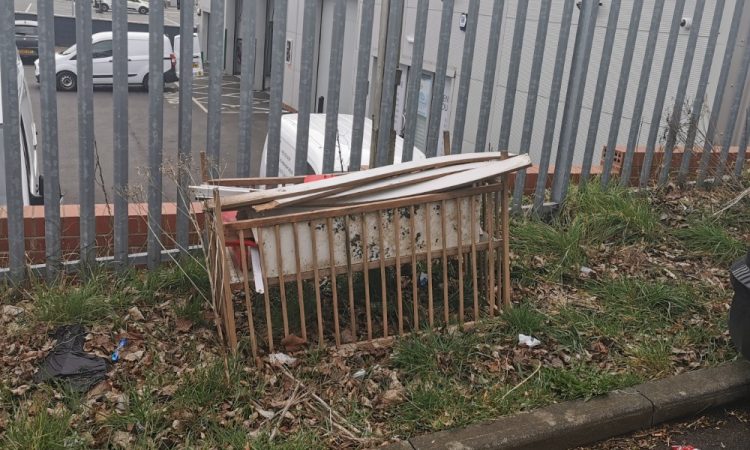 Need shopping again, just the staples really but I’ll grab whatever I can while we’re still allowed out to the shops.

Someone’s dumped a mattress in the back street (and if you look closely you can see someone has also not picked up after their dog has dumped a large deposit right beside it… I’m already getting quite tired of this someone, and someone really ought to sort that someone out.) There’s more lager cans, beer bottles and random ripped apart packaging in the park than normal too. The council announced last week they were stopping emptying the litter bins and it’s already having a big impact. Not pleasant.

Outside the post office there’s a group of older people (well into their seventies) circled around a variety of shopping trolleys – the kind that double as Zimmer Frames – and the queue for the cash point has to zig zag around them. At least the cash point customers are attempting to comply with social distancing requirements.

I nipped into Heron’s – they always have something new to take your fancy – and emerged with a bottle of diet coke (not for me, loathe the stuff) a bottle of mayonnaise (again, yuk!) a catering pack of Walker’s Crisps (I may have a packet or two) and a dozen Blue Ribands (definitely all mine.) Last time I remember having a Blue Riband I was wearing bottle green flares and a blue jumper with several yellow stars on the front – the pinnacle of fashion in the mid-seventies. Brings back memories. Sadly spoiled when someone mentioned Blue Ribands were produced by Nestle… so now I know why I haven’t eaten one for 40 years, and I reckon 4 decades of boycotting stands me in some credit, morally and politically speaking?

Coming out of Heron’s (apparently some locals have dubbed it “Heroin’s”, which is apt as it’s where I generally get my fix of frowned upon confectionery – I can’t say NO!) I managed to narrowly avoid the attention of a young bloke trying to collar unsuspecting passers-by with the offer of knock off goods. He almost body checks a woman out for a walk with a decrepit looking Jack Russell; “Want any gear?” he says, opening the large holdall and pushing it toward her nose, “chocolates, coffee, tea cakes… washing powder, conditioner.” The woman politely declines, though she’s obviously restraining a look of complete abhorrence at the thought of loose Mars Bars tumbling around an insanitary sack along with the Lenor.

I didn’t stick around to find out his pricing structure. The poor woman was still trying to disentangle her dog lead from around a bollard when I went on my way.

There was a queue outside Lidl. Four or five waiting to be let inside – I think the maximum allowed is twenty at a time and there’s a security guard sitting beside the door who gives the say so. Everyone in the queue has earphones in and is staring at a phone, which is proper social distancing. And there’s a bloke with a trolley piled full of paint and compost – nice to see someone has residual faith in the future – swigging beer from a purple can (maybe maroon, it’s oddly lurid for a beer) staring straight ahead at a distant point in the far corner of the car park. For a moment I wonder if he’s okay. He doesn’t look as though he’s waiting for something, a taxi perhaps? He doesn’t look unhappy exactly. He doesn’t look happy either. In fact he doesn’t look anything. He’s the most vacant human being I’ve ever seen. Gawping at the spot where the goods vehicles turn.

Finally the security guard gives me the nod – he’s one of the regulars, enjoys a bit of chat, and rolls his eyes and shrugs, “Welcome to Lidl’s.” He jokes about how it’s harder to get in here than in the last place he worked, which was a nightclub I’d never heard of. He may have been making that up. But I laughed in appreciation anyway.

I took a basket – I’ll never understand why Lidl baskets are so unfeasibly large, and why there are two sorts that don’t stack properly so there are tottering piles of heavy black plastic littered around the shopfloor like some weird Goth supermarket jenga… It’s a small annoyance I know, but surely they could fix that?

I got a sandwich for Clancy – BLT, see I do listen, Clancy! – and some fruity cous cous for me, plus a packet of cashews (emergency nuts, I know Clancy will be after them once she knows I have a fresh supply) and stood in line at checkout 6, the furthest from the exit. Checkout 3 was open and while I was waiting a voice came over the speaker that Checkout 4 was opening. Anyone who frequents Lidl understands that this means Checkout 4 will be available at some unspecified time in the not too distant future, or before the end of the shift at least. There’s absolutely no point switching queues if there’s less than twenty people in line before you.

The guy in front of the person in front of me wasn’t up to speed with this supermarket etiquette. He made a big scene of dashing out of line and nipping into the pole position at Checkout 4. Nobody else moved an inch. My queue went forward to claim his space, and forward again when the next person got served.

The Charlie at Checkout 4 began to mumble. He slapped his head. He shook his fist. He stamped on the floor with his designer trainers. He tugged on his beanie hat.

Nobody took the slightest bit of notice. The voice on the loudspeaker mentioned once again that Checkout 4 was opening. The young guy on Checkout 3 allowed a wry smile to momentarily cross his otherwise blankly professional demeanor.

Checkout Charlie finally had enough of huffing and puffing and slinked back to his previous place in the queue at checkout 6. Everyone silently made space for him. Humiliation was total. No more needed to be said.

The young woman in front of me had a loaded basket – 4 pots of crunchy peanut butter I noticed, and several bags of pasta, and I wasn’t sure she’d get away with that. There are signs everywhere urging customers to shop responsibly. But when she got to the till the checkout guy swiped them through – this is the same guy who the other day had come down hard on an older couple buying two packs of toilet roll. He was merrily chatting away to her, swapping travellers tales, stories about where they were from (she, Lithuania, he, Dublin), what they were doing in Leeds (studying, working here till something better turned up), when they were likely to make it home (by now I could not care less); and then they started sharing vegan recipes… By now all her shopping had gone through and he’d given her the total, but she hadn’t put a single item in a bag. She then removed her rucksack from her shoulder and proceeded to disgorge a number of tiny, tiny plastic bags, all the time talking about some news item she’d read about food wastage and stockpiling. She bent down and carefully arranged the bags into some order known only to her then started to bag up her purchases. Each tiny bag could hold no more than half a dozen items, and she packed items by strict product type – pasta could not be in the same bag as peanut butter, tomatoes were forbidden to share space with rice. The effort she put into arranging her purchases was a marvel.

I could feel the line behind me becoming restive. She’d taken so long to pack that Checkout 4 had actually opened and people were abandoning their positions. I was actually envying the queue at Checkout 4. Checkout 4 was not using the opportunity to checkout the opposite sex. He was shifting produce. Good man. Hero!

At last the woman with obsessive compulsive bagging disorder completed her purchase and I was able to dump my shopping on the conveyor belt and place each item in my carrier – which I’d thoughtfully opened previously to save time – as it was scanned. The way convenience shopping was meant to be. Quick and easy. And flirtation free.

I’d left the house at 9.45. Returned an hour and ten minutes later. Just in time for elevenses… and a Blue Riband.