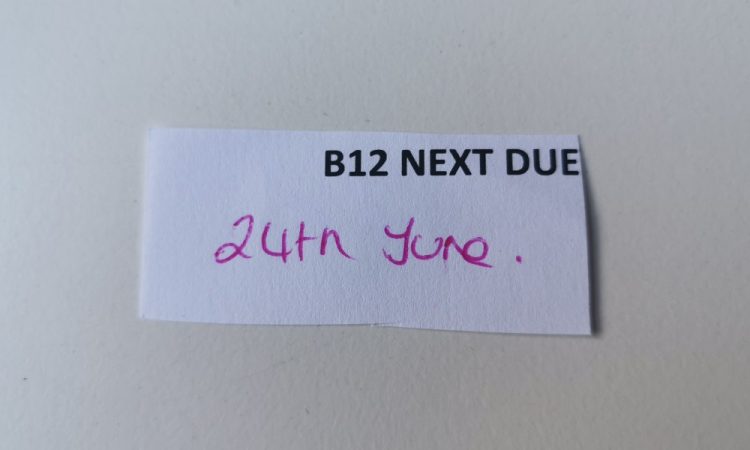 Going to the doctors for a B12 jab. An outing.

Had to go to the doctors today.

No, that’s not quite right. All appointments with the GP are by phone nowadays – I got a text saying so yesterday. I had to visit the surgery for my 3 monthly vitamin B12 injection.

I need the bloody B12 boost owing to decades of a pretty strict vegetarian diet. Vegetarians don’t get enough B12 (damn you carnivores!) so we need an artificial supplement or the health consequences are pretty dire. Or so my doctor informs me. Who knew that 5 a day was actually self abuse?

I rang the surgery last week to ask if I could combine picking up my blood pressure prescription – Christ, I’m falling apart by the sound of it – with the B12 jab as they more or less coincided, give or take a day or so. Which made sense to me. Aren’t we all meant to minimise our outdoors exposure and protect the NHS? But, no, that wasn’t possible. Separate appointments had to be made.

So I rang back Monday to book an appointment for Thursday – my official injection day – if that was still possible. Who knows if they’ll even be any B12 left these days? Recently I’ve had a couple of times when my local Boots hasn’t been able to provide my blood pressure meds (Boots for fucks sake! Isn’t that what they are meant to do?) and I know quite a few people who’ve had similar experiences with other medicines, so it wouldn’t have surprised me if the B12 shot was out of stock. After all, it’s only vegetarians that’ll be affected.

“Was I ill?” the receptionist asked.

Curious question, I thought. Surely anyone in need of an appointment at a doctors surgery was, by definition, not entirely in the pink.

No, I said. Feeling fine, and observing all the rules of social isolation. I’m all good.

Nope, I repeated, I’m a picture of health. Just need the jab that the doctor told me I required to stay healthy. It’s not like I’m doing this for fun, or to be awkward. I’m scared of needles. B12 jabs hurt. Sometimes I wish I could eat a bloody Big Mac and sort my vitamin deficiency out, but maybe that’s too late?

She said I could come to the surgery at 10am, Thursday, unless a nurse rang me in the meantime, and I would be “triaged.”

The only time I’ve ever heard that word is on the telly – ER, M.A.S.H. Scrubs etc. – and I know it’s not good. Triage generally comes before that moment, beep, beep, beep, beeeeep…. Beep…………… CLEAR!

I wasn’t happy about this triaging shit.

I got to the surgery ten minutes early – I’m a very impatient patient – and decided to while away a bit of time wandering around the block. The doctors is next to a pharmacy – great urban design I reckon, I think it’ll catch on – and as I sauntered by one of the assistants came out to smoke a fag and phone a friend.

The conversation was something about her friend Laura, who was her spitting image – seems as though they were often mistaken for one another, and hilarity ensued – but who’d got into a relationship with “a total prick” called Kyle (I think, could have been Carl) who made her do… look, I didn’t want to eavesdrop. I walked on the other side of the road to give her a wide enough berth, but she was one of those people who don’t have an “inside voice.” Who also don’t get the concept of “private conversation.” The sort of person who is prevented from visiting certain West Coast states of America in case her decibels set off tremors deep underground and tip San Francisco into the Pacific Ocean.

Sticking my fingers in my ears and humming Kumbaya I decided it was time to check in for my appointment.

There was a bloke outside the surgery door (way older than seventy, not in the best of nick) dithering. He’d pressed the buzzer, and informed the receptionist of his presence, but there wasn’t much action from within. Gradually he seemed to sink and slump against the closed glass door.

I didn’t want to appear patronising. Maybe he didn’t need help? He wouldn’t have appreciated my interference. I let him slip and slide til he was at a 45% angle to the floor when fortunately one of the nurses dashed to the door and ushered him inside, placing him safely on a chair. She asked my name and business and then locked the door again.

A very ginger woman wandered up and rang the buzzer. “I’ve come for my prescription.”

In the 3 minutes it took for the prescription to be delivered I found out the name and breed of her current two dogs, her favourite walk in Armley, the history of her previous pets (specifically a Lab/Whippet/Staffy cross called Billy, who did sound like a character) some unnervingly unnecessary details of the circumstances of the break up with her last partner (the bastard made off with the dog, the shit) and the employment history of her eldest child. I didn’t get her name though. Pandemics bring out the chatty in people.

It was 10.10. I don’t like being late and was feeling pretty anxious, when finally at 10.12 a nurse in full Hazmat garb unlocked the door, called my name, and waved me inside.

“Sanitize,” she ordered, pointing at the dispenser, “I’ll press, you rub your hands.”

She pressed the red bar twice. I miscoordinated, and two gobs of precious anti-bacterial gel splatted on the carpet. I apologised, “I washed my hands thoroughly before I left the house,” I said, “I’m clean.” She didn’t respond.

She didn’t respond when I ventured a little joke. “This is the most dangerous thing I’ve done in weeks.” That was the best I could do in the circumstances.

I’ve been doing the B12 routine for a couple of years and my usual nurse enjoys a bit of interaction. My last jab was in the first week in January and we’d shared funny stories of our New Year – I’d walked from a friend’s house in Chapeltown into the town centre to get a taxi and was mobbed by overfriendly drunken revellers all the way to the train station, she’d had her garden set alight by a rogue chinese lantern. How we laughed.

This nurse was just interested in getting the job done.

The jab rarely stings. The nurses are incredibly skilful. Half an hour later, however, your arm aches like hell.

I pulled the sleeve of my top right down and revealed the top of my bare, pale, skinny arm. I turned away. I’m still sickly scared of needles. She pressed and punctured my skin and I saw her thumb slide slowly down out of the corner of my eye.

“Wait there and I’ll sort out the date of your next appointment,” she said, tapping at the computer and writing something on a tiny slip of paper.

24th June. A few days before my birthday; “I won’t forget that,” I said. I have a history of not remembering to book my B12.

“I’ll show you out,” she said, hustling me toward the door before I’d managed to reinsert my arm back into the sleeve.

“Thanks so much,” I said, “and take care…” I doubt she heard my good wishes as she was locking the door behind me as I was zipping up my jacket.

My arm began to ache on the way home.

I took a detour by Lidl and bought a BLT sandwich for Clancy and a packet of Kitkats. Bloody Nestle again.

I suppose buying boycotted confectionery is the least of my worries. And why should the devil have all the best treats?