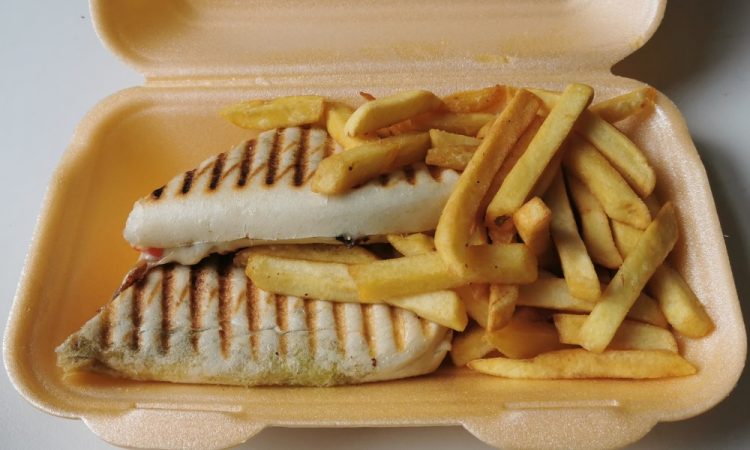 Woke early – bloody birds in the trees opposite making an unholy row, feel like the council noise abatement team ought to be notified – got up, made tea.

Listened to the news from 6.45. Had to turn the radio off at 9 as couldn’t cope with Lauren bloody Laverne. That chirpy Geordie accent grates right now, especially after 2 hours of doom and gloom and looming disaster, or as it’s properly known as, The Today Programme.

Made another pot of tea, and a cup for Clancy. Not really in the mood for Twitter. Normally I’d swap pics of my morning cuppa – and seem to have started a hashtag #Elevenses, I know not why – but not in an especially frivolous mood. Finding it hard to locate the inner jolly this morning.

Phone rings at 9.20. It’s Clancy. She says she’s ordered me a panini, and the delivery guy isn’t allowed to hand it over so he’ll knock and leave it on the doorstep – also, can I bring her the mayonnaise which she left in the living room? And a plate.

Clancy is in the next room. No more than ten feet away, but she still rings my mobile when she has anything to tell me. We take social distancing very seriously in this house.

Actually it was probably me who started this peculiar communicative arrangement and it suits me fine. Plus, she’s buying the paninis, so it’s all good.

There’s a knock at the door around 9.45 – I know the approximate time because I put the radio back on and Desert Island Disks had just finished – and I’m already downstairs in the kitchen making more tea, chamomile this time, which I’m not particularly fond of, but my stock of peppermint is running low and I’m all out of hibiscus. When I open the front door the delivery driver is already back in the car and shouts a greeting through the open passenger window.

He asks me how I’m doing, and I say good thanks and ask him the same, and he says good thanks and apologies for not being able to hand over the food in the proper manner. No problem I say and make some silly comment about his gloves – bright tangerine, attention grabbing – and he laughs and does jazz hands over the steering wheel. The paninis (is the plural panini still? I’ll have to check that later) are on the bottom step in a carrier bag knotted at the top and it’s quite an effort to bend down – I’ve recently developed an infuriatingly painful muscular problem in my lower back (if I’m honest, my left buttock, my arse damn it) – and I’m a bit hesitant. Delivery guy shouts, “You ok mate?” Which was lovely of him, but I wish he’d not noticed. I’m self-conscious enough.

Clancy said she’d ordered me roast veg pesto panini and chips, and got herself something with hash browns. I like hash browns. I wondered why she’d not got me hash browns too. She knows me well enough. Why does she associate me with chips? Nothing wrong with chips per se, but would have been nice to have had a choice. I quite fancy a hash brown this morning, actually. Am I not sophisticated enough for hash browns? Are hash browns more expensive (not cheap as chips.) I had to suppress a little moment of indignation – after all she’d provided breakfast, and very nice too – as I handed over her meal. And the mayonnaise. On a plate.

My panini was very good. Not exactly great cuisine, and probably quite unhealthy, but a bit of warm, greasy, stodgy normality, and just what the doctor ordered… well, knowing my doctor, who I suspect is a Presbyterian of Scottish descent, and eats oats for breakfast, cooked with water and salt and bitter, bitter self-righteousness, over a burning sod of peat, he probably wouldn’t approve. And it almost certainly sent my blood pressure soaring. I’ll need to walk off the extra calories too – probably I’ll just run up and down stairs for a bit rather than risk the outdoors. But, as things go, the breakfast of champions. High point of the day, all downhill from here.

I went for a walk after, via the bottle bank, not that we have many empties to deposit. Been a bit of a dry spell. Was going to nip into Wilcos – think Clancy mentioned she wanted to get disinfectant and more cat litter, so as I was passing thought I’d stock up – but the queue stretched round the car park. Couldn’t be arsed.

And sad to see this – no, really pissed off, can’t people fucking read! Take your shit home. No excuses.

Don’t know what I did the rest of the day, mainly tried to read a book I’m meant to be reviewing but haven’t got beyond page 98 in 2 weeks – I read a paragraph, zone out, stare into space for who knows how long, then have to read the paragraph again. Not going well. And audiobooks just make me fall asleep. Have no concentration for anything but the news, which can’t be doing my mental health much good.

Anyway, tonight is quiz night. I don’t like quizzes. I’m just trying to be sociable. Distantly.