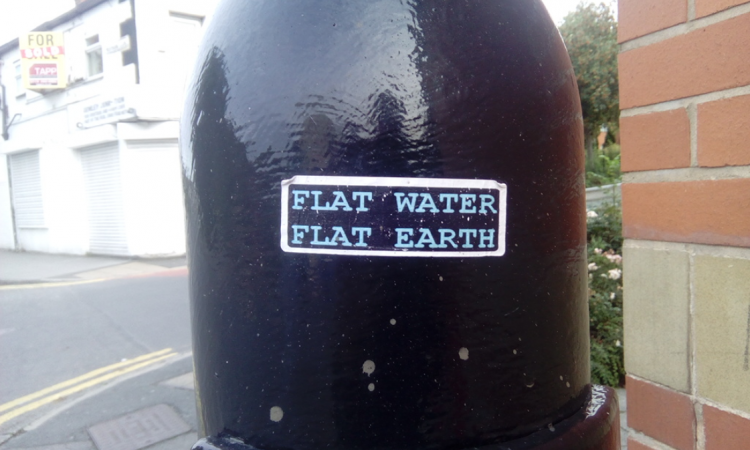 Where I go off on a complete tangent about something completely pointless… lock down is getting to me.

A CIA agent walks into a bar; “Gimme a Lee Harvey Wallbanger.”

If that joke made you laugh then you are what is commonly known as a “conspiracy theorist.”

If you simply nodded and smiled a knowing smile you are probably on an MI5 watch list (and we’ve never met, alright!)

If you haven’t a clue what the hell I’m talking about and didn’t get it, then go back to sleep… sheeple!

Conspiracy theories are everywhere right now. I live in Armley, a pretty somnolent inner city suburb (that’s not the right word, suburb implies leafyness, space and gentility, and that’s not LS12 by any stretch) and tend to talk to random passing strangers on my government approved portion of pedestrian exercise I am allotted per day, and have noticed how forthcoming people are concerning their odd beliefs about how the world works. A year or so I noticed a Flat Earth Society sticker on a lamppost outside the one stop shop on Hall Lane, which I thought was amusing and wrote something about flat earthers. But in the past couple of weeks three complete strangers have come up to me, engaged in conversation, and recommended I watch a particular youtube video.

The video is called Out of Shadows. I’m not recommending it, though it’s had millions of views so somebody is keen on it.

If you know anything about Operation Paperclip, MK Ultra or Cointelpro there’s nothing much new in the video (and if you don’t I can recommend some books, some fun reading.) It’s all fairly standard conspiracy stuff. Entertaining enough if you are into this sort of thing – and I am, though simply for entertainment purposes rather than enlightenment – but again, read the books for a proper understanding. I can recommend Dave McGowan’s Weird Scenes Inside The Canyon about how the hippies and the ‘60’s musical counterculture were an invention of the American secret services… you’ll never listen to The Mamas and the Papas in the same way again, trust me.

But what struck me most about the video was the last 15 minutes or so about a very famous contemporary performance artist, Marina Abramovic. She hit the news a few years ago when she became mixed up in a weird and wonderful conspiracy theory called “pizzagate” around the time Trump became president. The details don’t matter – and don’t make much sense – but the upshot was that some random arsehole barged into a Washington Pizza restaurant brandishing a gun and blew a hole in the wall, claiming Marina Abramovic was part of some Satanic, child molesting cult. Nobody was hurt. He was arrested and sentenced to god knows how long. It became a kind of test case why everyone should beware of conspiracy theories. Belief in conspiracy makes you do bad shit.

I’m not a fan of Marina Abramovic. I think she’s overrated, overpaid and overhyped. She’s a conceptual artist, and the problem I have with conceptual art is that once you get the concept you may as well not bother with the art. Take her Balkan Baroque. She won best artist at the 1997 Venice Biennale for this.

She piled up a heap of freshly slaughtered cows bones and spent a week in a very hot basement trying to scrub them clean, with predictably bloody results. The concept here was that killing people isn’t a good idea. And the Balkan war was pretty nasty. Both ideas I got. In fact I got them even before she started with the washcloth and Dettol, they aren’t exactly difficult notions to grasp. And my only response to her art work was, you can get down off that hill of cow bones now Marina, message received.

The thing is, very rich and powerful people love what she does. She’s a darling of the ruling class. But people who aren’t so powerful find her work sick, creepy and offensive. Which can happen when you bake a cake in the exact image of a naked woman and invite guests at a very posh party to cut themselves a slice (starting with the vagina, look it up.) She claims she’s just misunderstood.

Why are people in LS12 watching a video about something so obscure? And why are other people in mainstream academia and journalism getting so worked up about it? I’ve read tons recently on how to spot a conspiracy theorist and how to defend yourself against one (this is one of the best.)

The other theory doing the rounds is 5G. People who believe that 5G is bad for human health have said rude things to workers installing 5G masts and occasionally have tried to damage installations.

This is bad. Can’t deny it.

And serious journalists etc are right to critique silly theories.

But what’s a bit of criminal damage compared to the conspiracy theories of the rich and powerful; austerity (not real, a theory!); weapons of mass destruction (never existed but look at what happened when we were convinced they did!) Al Qaida (let’s not get started on 9/11.) Or anything spouted by Dominic Cummings.

It’s fine to laugh at David Icke, but Icke has no power. Nobody who attends an Icke event, watches a video or reads a book has ever invaded a country, decimated a health service or destroyed an economy. Youtube and Facebook etc can shut down all the conspiracy videos they like but it’ll make not a damned bit of difference. Conspiracy theories are not the enemy.

Karl Marx once said the religion was the opium of the masses. Conspiracy theory is the steroid of the oppressed; it just gives a false sense of power and control but leaves the really powerful in control. It’s a distraction.

Which is why I don’t bother arguing with flat earthers. If they are on the picket line, turn up to demos, sign petitions etc then we can talk about the curvature of the planet later. When we’ve taken care of our lizard overlords.

While I’m on about it, conspiracy thinking can affect any of us. Even people who write for this website. (I’m not exempting myself, I thought Ivor was right at the time.)