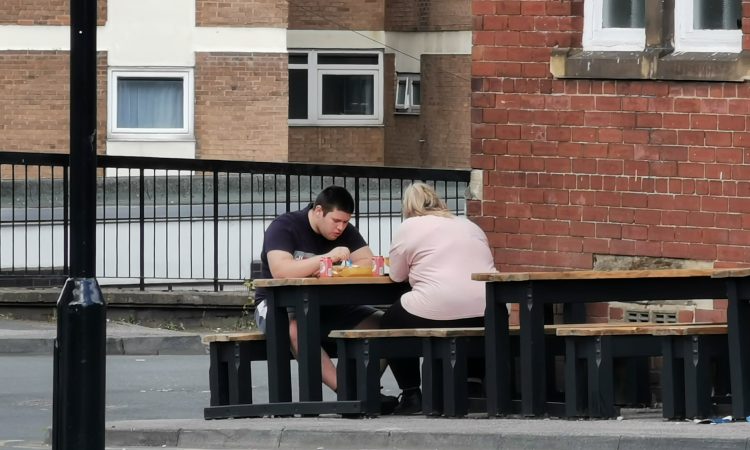 A walk along Town Street, taking in the sights and sounds.

There’s an old chap drinking lucozade at a table outside The White Horse. I heard him before I saw him. He had an ancient cassette player and was blasting out the theme tune to The Great Escape, banging out time with a rolled up newspaper as he conducted an imaginary orchestra with his spare arm.

As I got closer the music changed to Brian and Michael’s classic Matchstalk Men and Matchstalk Cats and Dogs. I vaguely remember this was Number One in 1978, right before Kate Bush’s Wuthering Heights and after Boney M’s Rivers of Babylon – we had some proper musical diversity back then.

I had to google ‘70s pop charts to check the facts. It’s why I wrote “Matchstalk” and not “Matchstick”, because who the hell calls a matchstick a matchstalk anyhow? Even spellcheck doesn’t get it. I’ve been saying “Matchstick” for over 30 years. That’s just insane. Not that I’ve ever had much call to reference the best known work of Brian and Michael – in fact this is probably the first time in 30 years I have ever thought about them, because they are shit –  but you know what I mean.

His own matchstalk dog, a tiny shivery terrier with wonky ears and an obvious skin disease, was under the bench lazily nibbling its way through a packet of Walkers Cheese and Onion crisps. I wondered how the dog managed to remain so small and emaciated given that it could have climbed into the packet and hidden comfortably beneath a couple of crumbs. In fact the dog could easily have used the crisp packet as a parachute in the event of an emergency fall from a tall building. Not that I’m recommending chucking a dog off a roof, it’s simply a thought experiment. Don’t try it at home, especially if you have Bassett Hounds.

Over the road the couple in the above pic were having dinner. Or possibly tea. It was about ten to four so what the heck were they doing eating, the freaks! But they looked happy, sitting on the furthest bench on a narrow pavement beside an empty pub, enjoying a simple meal in each other’s company.

Obviously it wasn’t anything so reckless, immoral and anti-social as a date. They knew each other, probably lived together (they never made eye contact, a dead giveaway) and apart from indulging together in a takeaway on an abandoned table in a scruffy alley in one of the less salubrious suburbs of Leeds, they were almost certainly otherwise staying home, staying safe, and protecting the NHS.

Can’t fault ‘em. Pure Armley. And the only interesting thing that’s happened to me in days.