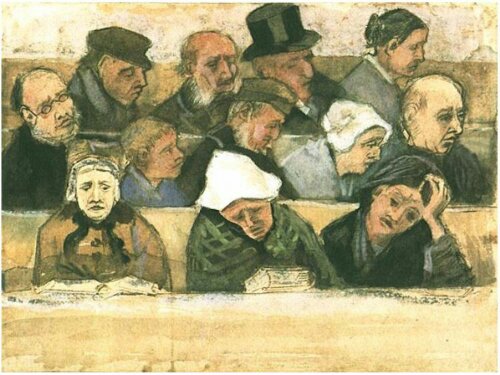 Sundays are the coffee creme of the week. Nobody even pretends to enjoy them and they are always left till last, usually shared with people you don’t really like.

Sunday was invented in 1173 by Roger de Caustic, third and notoriously acrimonious abbot of Fountains Abbey. De Caustic had discovered some of the lay brothers – who tended the abbey’s award winning flock and made sure the professional praying class got their habits washed – were brewing unregulated grog, getting drunk on Saturday night and making merry with the sheep. “Lascivious wassailing and most evil desporting with the innocent lamb,” as was reported in the local newspaper, The Daily Maleficent. De Caustic decided to tackle the outbreak of carnal revelry by strictly imposing a rule of silence, sobriety and six hours of self-improvement for the unwashed rabble, supervised by their moral betters and educational superiors.

The idea became viral and by the mid-thirteenth century the church had cornered the Sunday market in sanctimonious gloom right across Western Europe.

In the Middle Ages Sunday became known as “the day of rest”. This was mainly because capitalism hadn’t really got going and there was yet no entertainment industry to help fill the existential chasm that yawns once there is no field to plow or sheep to watch. There just wasn’t that much else to do besides rest and going to church. Life was simple. People weren’t happy but at least they knew their place in the great chain of being. On Sunday their place was on a pew. Listening to a man with bad hygiene and worse dress sense tell them about the rewards in heaven, the mediaeval equivalent of a lottery campaign.

The industrial revolution was a paradigm shift for Sunday. Soon after the Act of Enclosure was passed and people started to pour into the new towns and cities, Sunday was put out for competitive tendering by Benjamin Disraeli and the church lost its monopoly. From about 1865 the labouring masses had a choice how they were allowed to spend their day off. Museums, art galleries and great public libraries sprang up in every major metropolitan centre; silence, sobriety, and six hours of self-improvement were successfully rebranded as bourgeois values.

Art, culture and learning – or rather the art, culture and learning of the privileged few –  were together a fabulous means of keeping the masses distracted, in check and safely away from getting ideas above their station. Sundays were for people like us to spectate and soak up the ideological representations of the people in charge. Nobody was really happy but at least a few of us got to see Tutankhamen and dinosaur bones and stuff from Greece. Which must have been nice.

Things changed again in the 1980’s when Sunday trading laws were changed. Sunday would never be the same. Now there would be a million and one ways somebody, somewhere could turn a profit by subjecting the ticket buying masses to cultural torpor. Two possible benefits of this new regime are that firstly, the pubs are now open all day so at least we can dull the pain with drink; secondly, art, culture and learning has gone all participatory and interactive. Am I the only person to see a casual link between these two facts? What chance does a room of squiffily painted waterlilies stand against a slot machine with a fifty quid payout and a pint of Leeds Best? I think we all know the answer to that.

I’m off to Leeds Pride. So, see some of you later.