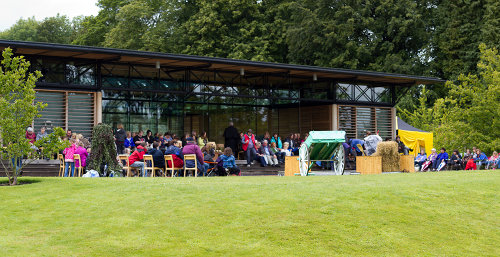 As a screenwriter and director, I’m fortunate enough to get invited to new productions fairly often, but I must admit it’s been quite a while since I’ve felt as excited as I did on Saturday, waiting for the open air Peel Heritage adaptation of Black Beauty. The production, based on the classic novel by Anna Sewell was set outdoors in the exquisite, floral grounds of Broughton Hall Estate in Skipton and as we took to our seats, I found myself feeling 12 again, passionate about horses and of course the text that fuelled that adoration: Black Beauty. 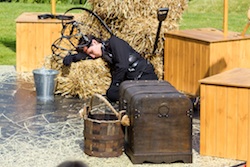 There was a decent turnout despite the wet weather and promises of, ‘you eat your picnic while you watch’, yet literally as the play
began, the rain abated. The production was an impassioned journey, moving me to tears several times; writer James Stone’s adaptation added greater romance than the novel and a new character, Flora as homage to author Anna Sewell. Director Chris Ford used the palatial surroundings to good use, inviting the audience to be interactive, walking to view the first act in various areas within the estate, opening at the stables before we were beckoned to the gardens. Using sculpted horse head pieces for the actors playing Black Beauty and the other horses, made the production feel modern and seemed to reference War Horse, with both Costume and Production Design boasting high production values.

I was deeply impressed with the strong ensemble cast who navigated their way through light and shade: drama and comedy with great ease and stand out performances came from Nicki Willetts who played Ginger and Gareth Radcliffe, Squire Gordon, who like the rest of the cast took on several roles. Those wanting to see a live horse, may have left a little disappointed it must be noted, although to have used a live horse in a 2 and a half hour play would have gone against everything Sewell stood for, (her novel changed legislation and helped ban the bearing reign which damaged horses necks) but if you missed the pre theatre workshop, you did miss out. Perhaps they could have brought on the horse at the end for a short while, to please the kids at least. I also felt the lead, Black Beauty played by Austin Staton could have pushed for greater emotional depth and at around 2 and a
half hours, the play may have benefited from being briefer as audience members waned towards the end. ‘Adapting the adaptation’ and being more ruthless with time, I feel, would have allowed for greater focus on the power of Flora and Black Beauty’s relationship and their narrative which was by far, the most compelling. However, a reenactment of Black Beauty at war was outstanding and worthy of the West End. 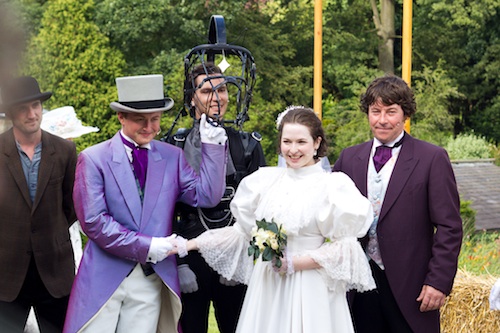 Overall, an accomplished, quality production and fun day out for all. The sun even managed to shine throughout, reminding us it is summer after all.

Vicki is a writer/director and first time mother. She blogs at www.honestmum.com and tweets @HonestMummy. To see her film work visit www.vpsarias.co.uk