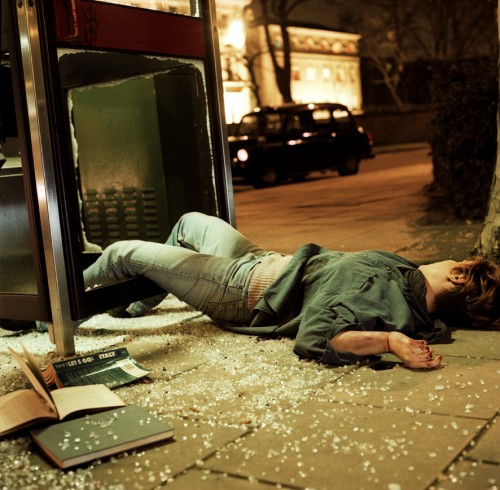 Are young people in today’s society misinterpreted? Or are politicians and the media correct in their representation of a ‘feral youth’?

Young Curators, a group of Leeds-based young people, aim to question perceptions of young people through the artwork in their new exhibition ‘Pumped Up Kicks’ which features work by six artists from around the UK, selected by the Young Curators. The works on display range from installations that consider the rebellious nature of youth to prints that relate more overtly to the political situation today. ‘Head Teacher’s Kicked Door,’ an installation by Guy Tarrant, questions the role of institutions in shaping the attitudes of young people. Benjamin Simons’ photographs of urban environments paired with the words ‘Misinstruction’ and ‘Aspiration(al)’ represent potential confusion between success and failure; how do youths know which way to turn? Rather than agreeing with negative representations of today’s teenagers the Young Curators wanted to examine the influences and choices in young people’s lives.

The Young Curators came together in a project run by Leeds Met Gallery & Studio Theatre to organise this exhibition. They first met in October 2011 and visited other exhibitions in Leeds, Bradford, Manchester and Newcastle. From these experiences they learnt about how to put an exhibition together and began questioning what makes a good exhibition. Throughout these visits they explored and developed the theme for their own exhibition. Partly inspired by the media portrayal of recent events such as attacks on Leeds students and the summer riots they moved towards the idea of youth culture, crime and its representation. As young people themselves – who do not identify with negative stereotypes – they decided to use the exhibition as an opportunity to question people’s prejudices and beliefs about the youth of today.