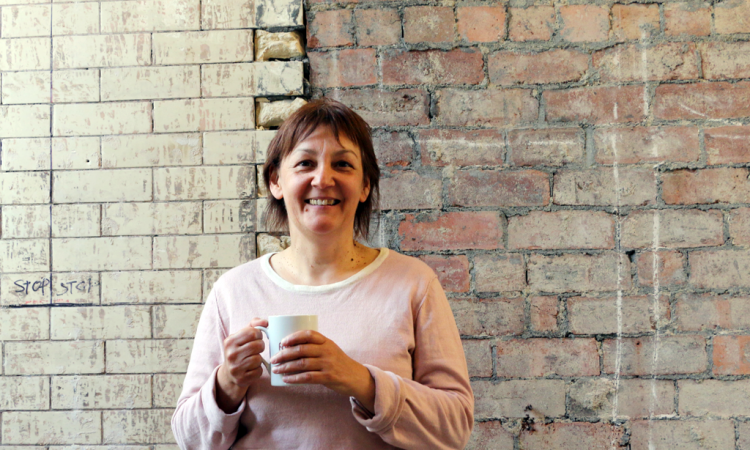 The last time I was at Patrick Studios in Leeds was to see body artist Franko B pummel the bejesus out of a punch-bag dripping with milk. Afterwards he played punishingly loud techno in the cafe area where I have arranged to meet Karen Watson, Artistic Director of East Street Arts.

Diminutive and softly-spoken, instinct tells me she would have my guts for garters if I stepped out of line. Along with partner Jon Wakeman, Watson set up the Leeds-based contemporary arts charity in 1993, and Patrick Studios (a former boxing club funnily enough) has been called home for nearly twenty years.

A ceramicist by profession, Watson graduated from Cardiff in the 1980s, when the emphasis for most art colleges and universities was on the gallery route of “having things hanging on walls or standing on plinths.” She and Wakeman had different ideas, seeing at first-hand artists prepared to challenge traditional expectations.

“They would take over buildings and have a city centre presence where they could interact with people walking by or they would enter into conversations with artists across different disciplines,” she says.

“Up in Newcastle there was Visual Arts North-East, a kind of guerrilla arts’ collective who found unusual places for art to be housed; in Manchester there was the Annual Programme. Those two cities seemed incredibly vibrant, and for the most part that vibrancy was going on outside of traditional institutions.”

The impetus for East Street Arts was initially pragmatic. Between them, Watson and Wakeman had acquired a ton of specialised equipment. “Looking at the studios here in Leeds at that time – there were about seven different groups, each affiliated with different institutions – there wasn’t any we could actually get our equipment into. They were cold and dirty and on the top floors of mills, and Health and Safety was a bit wanting.”

There was a need for professional studio provision where artists could meet one another and develop their practice, she says. “So of course the first thing we did was find the top floor of a mill that was cold and dirty and failed to meet any Health or Safety demands.” That space was East Street Mills in the city’s Mabgate area, and it was very much a DIY affair.

“Jon comes from a Quaker background, part of a community where people do things for themselves and make things happen. I come from a village [Fitzwilliam near Wakefield] where everyone was in some way connected to the coal industry. I grew up knowing that this school, this hospital, this social club, had all been paid for by the miners.”

Never having lived there, neither was attuned to the artistic infrastructure in Leeds in the nineties. Placing ads in Leeds Other Paper, they called for like-minded artists to meet and join with them. “We quickly learned that if we divided the space enough to give people what they needed, we could get an income that covered the costs of that space.”

What soon became apparent was a wider issue. “At the time Leeds hosted two universities and an independent art college, plus other cultural courses, but it still felt like talent was oozing out of the city. In other Northern towns and cities that wasn’t happening, so we started to ask why it was here?”

The pair contacted other city-based studio groups in a friendly spirit of collaboration. From this grew Leeds Artists’ Network which promoted the city’s visual arts presence via a programme of shared events and meet-ups. The group also harangued decision makers in a bid to try and shape policy.

“We made a nuisance of ourselves. We pushed ourselves into conversations. We wanted in with the new cultural strategy Leeds City Council was writing. The Arts Council announced a consultancy to look into studio spaces outside of London, so we threw ourselves into that.”

However, the network was short-lived. “It totally exhausted the whole lot of us. We were running our own studios, trying to keep our own practice going and earn an income, all while trying to develop this network.”

Leeds Visual Arts Forum followed and expanded to include curators, galleries and venues, all paid, which meant they were well placed to form a lobby group. “We invited Lewis Biggs, who was at the Tate Liverpool at the time, to talk about how Liverpool managed it. We asked Nick Crowe from the Annual Programme in Manchester: How did you make Manchester something else?”

While this largely sat outside of East Street Arts, within the organisation itself conversation turned to what was needed for artists to remain in Leeds. “One of the things they really didn’t want was to be part of a co-operative. They didn’t want to run an organisation, but they did want to be the beneficiaries of it. They were really loud and clear about that, and that’s how it’s developed as we’ve grown up.”

In 2009 East Street Arts began renovating disused buildings around the city, creating over thirty artists’ studios in disadvantaged areas. Its In Situ programme provided temporary exhibition, event spaces and studios around the UK. In 2016, the charity set up bespoke artist-run venture The Art Hostel which offered visitors alt-accommodation in the heart of Kirkgate until its closure in 2018. [A new permanent Art Hostel is planned in Mabgate.]

“We did eventually apply to be a charity. We learnt about who else was out there and how to be part of a city, particularly a city that hadn’t understood the potential of its visual arts sector. It completely understood music, dance and performance, because there were champions for those, but we were playing catch-up.”

The foundation of GUILD last year continues that process. An ambitious three-year programme of mentoring, tailored support and infrastructure provision, GUILD’s brief is to explore ways towns and cities can develop artist spaces to create a sustainable basis for creative practice.

An open call to artists and artist-led organisations to take part in the programme resulted in over a hundred applications. Among those selected to benefit are K6 Gallery, named for the pair of red telephone boxes in Southampton it calls home, Manchester’s The Travelling Heritage Bureau, which works with migrant international women artists, and the distinctly DIY Shy Bairns, who curate zines, exhibitions and workshops in Salford.

The application process did throw up some intriguing anomalies.

“We got a lot of applications from Bristol. Absolutely loads. More than from London or anywhere else!” [The Arts Council’s decision not to renew funding of two of the city’s main providers had created turmoil in Bristol it seems.] “In the end we selected two [Bricks and Caraboo Projects] who also support others. It felt like we were covering a lot of ground, but just going through the application process, we wouldn’t have known that.”

One finding would seem to vindicate the charity’s approach: “For some reason a lot of print makers applied which suggests there is a print-making space issue in a lot of cities.” GUILD intends to lobby ‘funding bodies, local authorities, community and regeneration bodies … and be an advocate for flexible solutions to embedding arts spaces and artists within cities and town centres.”

Arts Council England seems to place a lot of store by artist organisations finding their feet, the idea of so-called resilience which carries with it an inherent risk of burnout, I suggest. “This notion of burnout isn’t normally associated with emerging creative individuals,” Karen says, “but well-being and some support other than infrastructure support is really important.”

“It can feel like a rite of passage, going from ’emerging’ to ‘getting there.’ Because there’s always more to do, sometimes you can put ‘getting there’ at risk because you’re stretching yourself too much; some of that learning around burnout and how you manage it, thinking about cycles and long-term plans, fed into GUILD a lot.

“Through our temporary space programme [In Situ] we were already supporting partners to create and manage their own spaces, sometimes for months, sometimes for longer; we’ve had a space in Middlesbrough for seven years working with Navigator North, who are now part of GUILD.”

Time is an important resource in itself, she says. “We’ve been able to offer collectives and artists quite cheap spaces, plus funding and resources, which gives them time to develop who they are and what they’re doing. They contact us when they need to. We’ve always offered support on a free basis, which does pull us all over the place, but we learn a lot from it.”

“GUILD has been the vehicle to try and convince the Arts Council that by having this proactive approach, we can talk to people at an earlier stage of their development about resilience and sustainability. We take those words very seriously, and resilience is being used very cheaply at the moment. For us it has to mean something real.”

Talk turns to Europe. East Street Arts is not just about Leeds – or Bradford or Grimsby, or one of a score of UK towns and cities the charity has benefited – but about Rotterdam and Berlin too. It is important not to cut yourself off from possibility, Watson says. “We want Leeds to be a better place, but if we’re not sharing our learning, we’re also not bringing any learning back.”

Watson draws the parallel with creating ceramic art, a process which requires discipline and patience and where external factors beyond the artist’s control can also affect the outcome. “You put something in the kiln and it could just blow up! You’ve got to understand what went wrong. It’s one of those art forms which is fundamentally about process, and so are we, I think. I do find that interesting.”

Get involved with the Indigogo fundraiser for a new Art Hostel here.

Michelle Wright on a possible future for philanthropy in arts fundraising here.