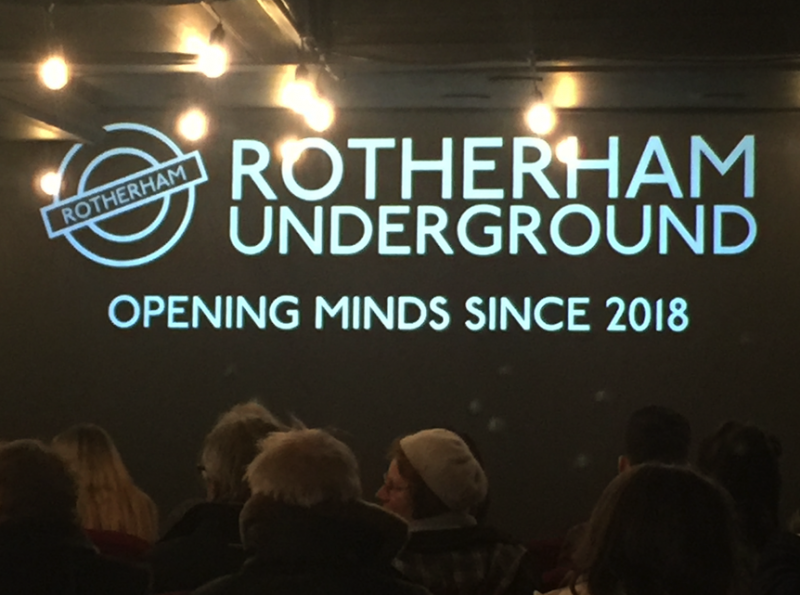 ROTHERHAM UNDERGROUND, a new arts space with a mission to create ‘work for Rotherham by Rotherham’ recently opened its doors. VICKI GALLOWAY-PLACE was on hand to take notes…

The preview of Rotherham Underground, branching off from Open Minds, launched the arts space with a new name, a new mission statement, a new venue and news of some exciting plans afoot.

A vibrant initiative by Alice Bartlett and Craig Roberts, Rotherham Underground opened its doors to the public with a screening of the film Suffragette, starring Carey Mulligan.

The event was special for lots of reasons. It really feels as if a breath of creative fresh air has been released into Rotherham, and whilst the theatrical programme doesn’t commence until the autumn, a year long programme of preview events was officially launched at the opening.

The main aim of the company is to produce work ‘for Rotherham, by Rotherham.’ It intends to forge a real community spirit through various theatrical initiatives: new writing, fringe performances and theatrical work, influenced by current and past events in Rotherham, will also be toured further afield.

It’s clear Alice, who as Artistic Director comes with a wealth of professional theatrical experience, and Company Manager Craig, a long time resident of Rotherham with an impressive portfolio of community and education work, has each invested blood, sweat and tears to overhaul the space.

It functions as a working creative space for rehearsals and an ever growing youth theatre is already underway. There is a small stage and a bar area and at the opening we were the first audience to watch the film complete with surround sound which  shook the floor throughout the screening, particularly when Emily Davison threw herself in front of the King’s Horse at the Derby.

The choice of ‘Suffragette’ on the night of the centenary anniversary of women being given the vote in the UK was a clear nod to how important it is to Rotherham Underground to celebrate and support change, while advocating equality through their artistry. It was pretty much a full house last night, and when the film finished (which was awesome by the way), the entire audience gave a rapturous round of applause.

It is a fantastic way to bring communities together through the power of performance and media. Even more exciting is that Rotherham Underground will be the city’s only producing theatre. Open Minds may well be known in the community for its annual Shakespeare Festival, but as time and theatre moves on, so too has the company. (There are exciting developments this year to celebrate the event’s tenth anniversary.)

Rotherham Underground hopes to be so much more, with plans to generate and produce new writing, regular screenings of films, the Shakespeare festival, the Magic Circle and many other creative ventures to choose from, it is clear that this is the place to be where creative minds can meet, explore and perform in Rotherham.

As the vision statement says: “A place to discover your community. A space to build a new world.” From what I saw at the opening, this is exactly what it will be. I can’t wait to see what the Rotherham Underground brings to the world of theatre over the next few years.

Rotherham Underground is currently looking for Rep Company members to be involved in professional theatre performances with professional writers and directors. For more information go to ROTHERHAM UNDERGROUND