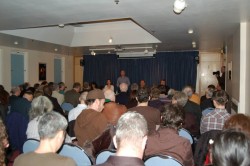 Last August, in response to Neil Owen’s original report on Leeds cultural offerings, I argued that debating groups were an important cultural dynamic in the city that could be one aspect of its ‘unique identity’. A year on, and again following Tim Ineaux’s recent ‘report’, how does my claim that Leeds is a ‘city of debate’ stack up?

In my original article I listed 5 main public debating groups in Leeds:

In addition, I listed various other initiatives that promote public discussion such the Leeds Summat (which returns this November), Culture Vulture’s own Cultural Conversations, and the Inter-Disciplinary Ethics Applied Centre.

I argued that Leeds seemed uniquely dynamic on the debating front compared with other cities. The reasons for which were perhaps a result of the early setting up and success of some groups, in particular Café Scientifique (founded in Leeds), which encouraged others to have a go, in turn creating a keen and growing audience for public debate. Whatever the reasons, the last year has seen the emergence of even more groups. Amongst those new debating fora, and one existing one I failed to mention last August, are:

Overall there are 9 independent forums dedicated to promoting public discussion in Leeds on all and every subject, and which regularly pull in audiences of 30 to 60+ per debate. We can also add to this various other organisations that promote occasional public debate in Leeds such as the British Science Association: West Yorkshire Branch. Leeds is also home to the public presentation forum and phenomenon that is Bettakultcha which is also spreading its wings beyond Leeds.

Not only does all this add up to a healthy culture of intellectual discussion in the city, but there has also developed a healthy sense of fraternity between many of the groups through the swapping of website links, joint events and the occasional promoting of each others’ events which has helped, I believe, make the idea of Leeds as a city of debate a reality. However, if anyone thinks any other UK city (outside London) could rival Leeds as a city of debate tell us which and why.

Paul Thomas is co-founder of The Leeds Salon, proselytises about debate in Leeds, and writes regularly for Freedom in a Puritan Age and Culture Vulture. He will be giving a talk on how to set up a debating group at the Sunrise Conference 2011, which takes place on Saturday 3 September in The Cosmopolitan Hotel, 2 Lower Briggate, Leeds, and online.