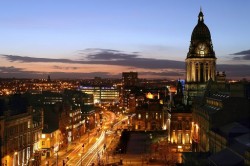 Leeds would be a controversial choice for the UK’s first City of Culture. No question. It would raise more than a few eyebrows and there would be a lot of teeth gnashing in larger, more prominent cities (naming no names).

But I believe it would be the right choice.

There’s something about the small scale of the city and the proximity of urban to rural that inspires ideas. Unlike much larger cities, the compact nature of Leeds acts as a cultural petri dish and cultivates ideas.

Leeds epitomises the can do attitude of the North and this permeates all aspects of the city, including its cultural output. Like many cities in the North, Leeds has been transformed in the past ten years into a truly sophisticated city with all the trappings of a modern city underpinned by the unique Leeds attitude: a combination of sheer bloody mindedness and creativity.

Of course, many cities would claim they could deliver this – but Leeds has plenty of examples of this in action. If I was putting together the Leeds bid for UK City of Culture, I’d be lifting the lid on the city’s diverse cultural scene and shining the spotlight on some of the most creative and inspiring work in the UK.

Design in Leeds has a rich heritage and to this day, the design scene in the city is as strong as ever, constantly changing and diversifying. From successful international design companies like Elmwood and Thompson Brand Partners to vibrant design collectives like Nous Vous, Leeds has it all. Our reputation as grounded but highly creative rightly attracts talent and clients from all over the UK.

The digital sector in Leeds is growing apace with some of the most innovative thinkers in the country plying their trade in the city. At the very cutting edge of digital inspiration are digital agencies like Numiko, madebypi and fuse8, that’s just the tip of the digital iceberg.

Our vibrant creative industries are a vital component in the city’s success and unlike other cities, they are valued and significant contributor to the growth of the city.

There’s also a groundswell of highly creative art and cultural fusion happening in the city right now with artists, photographers, sculptors, writers, film makers all collaborating on projects and engaging with the wider population. It’s these collaborations that are building a real sense of cultural boldness.

Musically, Leeds has made its mark too with arguably the UK’s most exciting and vibrant music scenes as the Guardian said “forget Manchester, Liverpool or Sheffield, Leeds has the most happening music scene outside of the capital” Enough said.

Of course, Leeds has always been internationally renowned for its artistic heritage and is home to Opera North, Northern Ballet Theatre, The Northern School of Contemporary Dance, West Yorkshire Playhouse and the Henry Moore Institute – all cultural powerhouses, part of one of the strongest and most influential arts scenes in the UK.

Alongside the usual things many cities do which allow them to lay claim to being a cultural centre (film festivals, music festivals, art/literary stuff), I think it’s also the influence of technology that’s making things so interesting round here right now. In Leeds, we’re not just doing cultural things; we’re finding new ways of doing cultural things. The various ‘camps’ that happen in the city (Barcamp, Photocamp, etc) are blurring the lines of creativity in a cultural, ‘arty’ sense, and creativity in the industrious, innovation sense.

Leeds has a long history of industrial innovation that has improved our cultural lives, and that spirit certainly thrives today. Temple Works – once a socially-conscious, industrial building is now transforming into a colossal art space, which will attract national and international attention.

Leeds isn’t perfect – and no city is. Ultimately creative people thrive on the mash up that is the modern city – the mess, the humanity, the contradiction. We need to feel we’re at the heart of something vital. And what we also crave is the escape from this that comes from being close to nature and of course Leeds delivers this – in spades.