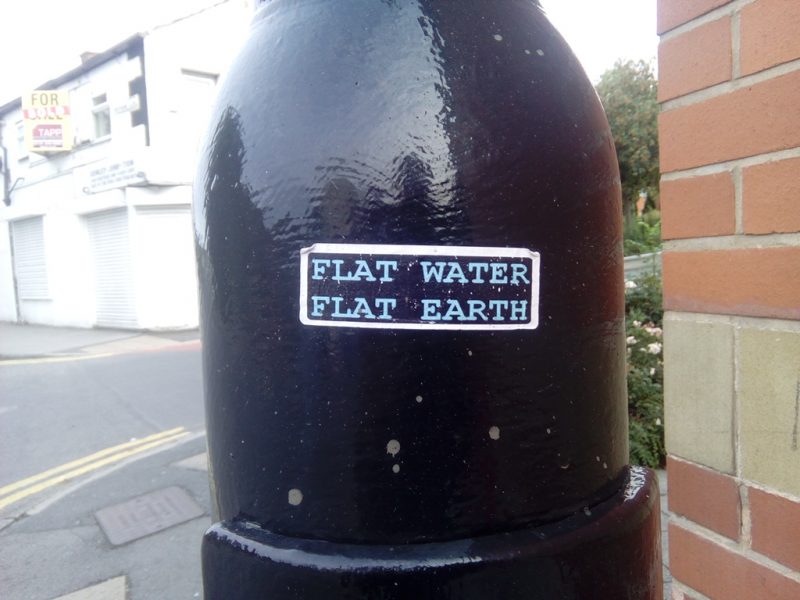 The other day I came across this sticker on a lamppost just off Town Street in Armley. There’s no website details or email address or logo, and nothing to indicate who put it there, but it’s obvious what this means.

I have a neighbour, or maybe neighbours, who don’t think the earth is a round ball – technically an oblate spheroid if you believe Neil deGrasse Tyson – spinning on its axis, hurtling through space in an infinite and expanding universe. It is flat. Maybe the earth is square with columns at each corner. Perhaps it’s a disc surrounded by an impenetrable wall of ice. Or it could even be a double sided slab with a hole in the centre and the civilisations of Atlantis, Lemuria and Hyperboria on the underside. These are all questions demanding further research. But the main point is, the earth is not a globe.

And this sticker means they want us to know about it.

I’m not interested in ridiculing flat earth theories. If you want to have a go read the recently published “Escaping The Rabbit Hole: How to Debunk Conspiracy Theories Using Facts, Logic, and Respect”, by Mick West which has a very good chapter on flat earth. And I am a Round Earther, a Rotunditarian, a convinced Ballist, an avowed globetard (I think that’s what they call us.) I’m more interested in this from a cultural point of view.

Whoever put that sticker on a local lamppost is not alone. The Leeds Flat Earth Meetup group has 166 members. To put that figure in some perspective that’s seventy more than the Good Reads bibliophile group, a hundred more than Leeds Technology group and more or less equal to The Leeds Savage Club – though not quite as popular as the Naked Gay Meetup, which may say something about culture in Leeds. Flat Earthers are part of our diverse and vibrant culture.

Mick West’s book suggests we treat people who espouse unorthodox, unusual, irrational conspiracy theories with friendliness and respect. I’m not sure this would work with Flat Earthers. The Leeds Meetup advertises their “epic pub nights”, which are apparently so fabulously entertaining and enlightening “you’ll never want to socialise with your zombie mates after meeting us!” I’m not sure “zombie mates” is exactly respectful or friendly. That’s you and me they are referring to. Personally I’d prefer to give a wide berth to whatever boozer they happen to meet up in.

Most of us think Flat Earthers are just a bit crackers and cultlike, cranks but generally harmless. That could be true. I don’t think a Flatter has ever invaded a country, undermined democracy, or started a war (the logistics of a flat earth army, navy or air force would be a nightmare.) And, let’s be honest, it must be hard for them to get many jobs. Imagine having a conversation with a Flat Earth travel agent;

“You mean Along Across sir… and by the way, Australia doesn’t even exist!”

There are dozens of youtube videos claiming Australia is not real. That’s about as daft as it gets.

But Flat Earthers are also into organics and natural healing and protest songs. Just look at this video advertising an upcoming meeting in a few weeks, entitled “Stick Your New World Order Up Your A***”

Of course they are for the “99%”, hate the Tories and demonstrate against fracking – well, we don’t know how deep this pancake earth is, so fracking is even more concerning for the flatters than for the rest of us. But alongside all this very wholesome sounding stuff in one very bad 4 minute song there’s stereotypical Jewish bankers, Illuminati, freemasons, chemtrails, anti-vaccination and fluoride claims, and a whole cart load of conspiracy cobblers that’s usually associated with the nuttier end of the right wing.

Maybe not so benign after all. I wonder if the council would allow them to meet in one of the cities public buildings (the council refused this lot last week.)

So, if I met my flat earther neighbours in the street and they tried to engage me in debate I’d almost certainly decline. Like all “true believers” they don’t really do conversation, they just wait for a break in the talking so they can set you right, expose your delusions, wake you up. Either believe, or you are a zombie or a shil.

There’s a very funny video from the first flat earth conference in the UK held in Birmingham earlier this year where 3 young scientists were invited to debate a panel of flatters, and it’s painful to watch. It reminded me of this moment from Friends where Ross is trying to convince Phoebe about the reality of evolution. No matter what evidence he presents, what reasons he provides, she declines to “believe”. Eventually Phoebe loses her temper.

Can he be so unbelievably arrogant, she asks, that he can’t admit the slightest chance that he might be wrong?

Wasn’t there a time when the brightest minds in the world believed the earth was flat?

Sheepishly, Ross agrees that there might be a chance.

Suddenly, Phoebe has him – Ross’s admission destroys the credibility of his worldview. He’s a palaeontologist and, having admitted he can’t be 100% sure about evolution, how can he “face the other science guys”?

Ross should have just said no. There never was a time when the brightest minds in the world believed the earth was flat. End of debate.