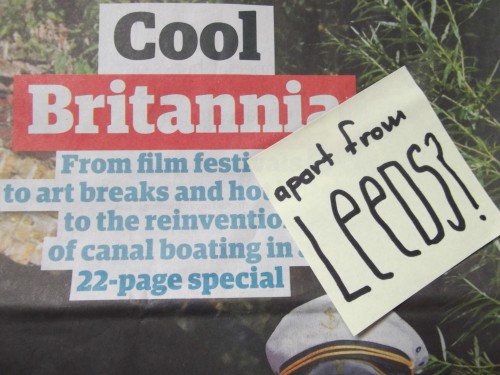 Guest blog from Tim Ineaux taking up this year’s tongue in cheek challenge of grading Leeds cultural offer from Neil of TestSpaceLeeds. Read and then let us know in the comments what would your grade would be and why.

Over the weekend I read the ‘Cool Brittania’ edition of the Guardian’s Saturday travel section. Disappointingly there was precious little reference to our fair city, despite it being an ostensibly regional piece with no evident London bias. Clearly Leeds isn’t the centre of everyone’s universe, so there was never going to be blanket coverage of our cultural offering. Plus, I recognise that there were some Leeds shouts, including Slung Low’s innovative Original Bearings and Phoenix Dance Theatre’s Declarations along with mentions for Hebden Bridge, East & North Yorkshire and of course the Hepworth Gallery. Not to mention the fact that they flagged these very pages as the best place for hot cultural tips from local types. So, one year on from Culture Vultures report card for Leeds it seems timely to rehash the report and see how we’re getting on.

I’m a proud Yorkshireman and I love my city. So I was massively disappointed that there was no mention of anywhere in Leeds for a novel cinema experience (a particular passion of mine) or more importantly any jack-of-all trades venues mashing art experiences with hairdressers/tearooms/clubs/bookshops etc.

Before setting the record straight and proving that we have all this in spades (should that be bloody shovels? #yorkshirejoke) lets reflect on why we weren’t featured. Its all about profile. There’s a good reason they pointed readers in the direction of @Culturevultures: you need to do a bit of digging to find out whats on and where to go, because there is no physical entity or high profile experience to bring it all together and act as a beacon.

As Neil Owen (Test Space) and Paul Thomas (Leeds Salon) along with many many others have noted previously on these pages, we punch below our weight and lack a genuinely vibrant cultural quarter anchored by our own version of Manchester’s Cornerhouse. Despite some sterling work breathing new life into the once tired Art Gallery and opening the Museum, along with the outposts of Opera North & the Playhouse, the city centre still appears a cultural desert. Unless that is you count shopping as culture. Disappointingly things don’t look set to change in the near future, with one a shopping arcade approaching completion and another massive one being granted planning approval in Eastgate. What does this say to those beyond the city? It might be an SP, maybe even a USP, but really, is this all that the biggest city in the biggest & best county can offer?

We’re more old fashioned donut than global marketing phenomenon Krispy Kreme: we’re lacking a middle. We have the grand edifices, the jewels in the crown. We have a burgeoning, if largely underground, creative scene. What we don’t have is anything in the way of accessible middle ground to bring in new audiences and to enable fledgeling enterprises and individuals to grow. This is where we need to devote our attention. The big institutions will survive, and creative types will continue being creative, but the danger is that they will go elsewhere to grow. Its only a matter of time before Brighton has it’s own Leedstown ghetto, complete with replica gold owls & miniature Corn Exchange.

So what can we do? Well we should focus on people and creative the conditions for them to thrive. Without people, buildings, institutions and organisations would be nothing. We need a showcase platform that makes our vibrant creatives more visible and accessible. Allied to this we need a programme (or people) to provide support and share expertise from those large institutions and the commercial sectors, to give fledgeling creatives a route to grow and stay here. The ELSIE Community Enterprise Accelerator from @mikechitty may well have a role to play here. Plus, with no significant opportunities on the horizon to bring our cultural offerings together in a physical sense, we need a better way of uniting the many disparate elements of our creative scene.

In this debate previously there have been many comments about what the Council should do, and clearly there is a role for them in this. Although credit where it’s due, there has been much done on their part to date. But! We need to recognise that old style council paternalism is a thing of the past given the current climate. Not that it was ever our best hope. There is little to no money, and their resources are stretched as never before. I for one was amazed that there was any money left in the pot for this years Light Night. That shows a degree of commitment to creative culture, however they can never be drivers of this, they can only be enablers.

We need to rise to the challenge ourselves. We need to be ambitious as well as creative and innovative, and we need some sort of safety net from existing knowledge to allow us to take risks in a measured fashion. What we dont need is grand visions with no ownership or route to being achieved, and strangely, we dont need more funding. We need to make what little we have work better for us. That is the route to resilient and sustainable organisations. The current economic climate may be our one opportunity to find a toe hold with which to push ourselves onwards and upwards. Despite my earlier comments, big business as we used to know it is struggling. It needs us just as much as we need it, witness the new uses for city centre space and the clamour for innovation to stand out from the crowd.

To surmise, Leeds could still do a lot better, and I fear we have made little improvement from last year. There is still a lot going on, but it is not achieving the critical mass that is required to make a real difference and I dont get a clear vision of how this will happen. So as last year, it’s still a C+ for achievement, despite flashes of brilliance and some A*’s for effort.

Tim ineaux is an event promoter, guerilla situationist, sub commandante of the Projector Liberation Front and pioneer of the art of YouTube jockeying. He hosts YourTubes, a monthly interactive video jukebox at Seven Arts Centre in Chapel Allerton and will be curating a projection based installation atop the Parkinsons Tower during this years Light Night. @timineaux