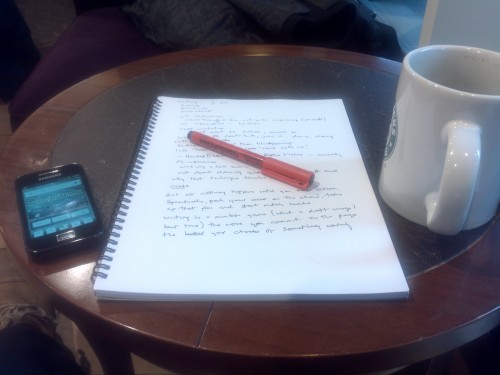 Whenever I am referred to as “Mr Kirby” I know I’m not going to appreciate what follows.

“Mr Kirby, the results of your test have arrived . . . will you sit down please?”

“Mr Kirby, can I have my money back?

You know the kind of thing.

Not surprising then that I winced observably when a recent comment on a previous post began so formally. I stiffened myself for the bad news. “Mr Kirby,” it said, “Mr Kirby, your post was overwritten to a ridiculous degree!”

Accurate, I thought. Insightful. To the point. This person, I surmised, had obviously studied literary criticism to an advanced level in a famous department at a major university.

The next few sentences were sadly a bit of a let down, a litany of imprecise insults and tedious moralising, chiding my lifestyle and my pretensions to artistic credibility. I was accused of writing like a Sixth Former . . . nobody wants to be reminded what their writing was like when they were pubescent. Still, overwritten and ridiculous struck me as a perfect summation of the style of post I like to stick up on this site. In fact, I may reinvent myself as the honorary editor of ridiculous overwriting. It’s an acronym.

I did wonder what the problem was. If you want fair, balanced, responsible journalism then you need only pop into your local newsagent – you pays your money, you takes your (very limited) choice. If beige is your measure and magnolia your mascot – if you like the facts and nothing but the facts, prose that is porridge to the mind and bromide to the soul – then the internet is not short of reports and white papers and worthy tracts that will help you become a wiser, deeper, better informed human being. Why come to Culture Vultures expecting high minded seriousness? Specifically, why read anything I post expecting me to stray far from my favourite topics of booze, Beeston and bad behaviour?

Maybe that’s what I should put above my desk; Editor of 3B’s?

What does “overwriting” mean anyway? How would you know what the correct number of words should be, or the proper selection, or the necessary norms that regulate their rampantly generative potential? Is there a legal limit on loose language? Ought there to be a Government Health Warning for those at risk of overdosing on intoxicating diction? People who think there is a right way to write – respectable, restrained, retiring – are wrong.

Maybe I do write like a Sixth Former – the quip was used twice in a short paragraph so I assume my commenter thought he was onto something. I do remember the drudgery of English “A” level essays, the formulaic cleverness we had to demonstrate and the falseness of tone we had to adopt, churning out words that would offend nobody, provoke nobody, gratify nobody. And I remember the thrill of producing an underground satirical magazine – The Pariah – that poked fun at everything the school stood for; sport, manly stoicism, wholesome values, anti-intellectualism and blatant homophobia. We published mainly character assassination, nihilistic ranting, scatological silliness and lots of outrageously overwritten porn – and as not a single one of us had actually engaged in intercourse at the time the joy of sex was wholly verbal. It was fantastic fun. I failed my English exams. I almost got expelled – fortunately I had a couple of incredibly indulgent and supportive teachers who always managed to keep me out of bother and even lent me books from the banned list. Most of all I got to retain a sense of wonder at words that Sixth Form would otherwise have extinguished.

I’m happy not to have grown up into a serious, proper, sober writer. I don’t really care if my words bear as much relation to reality as a toddlers painting of a house bears to the street he lives in. And probably for the same reason. I choose the brightest, brashest words and slosh them all over the page, not really worrying about colouring within the lines, making a mess, pleasing nobody but myself. Because it’s fun. Writing is meant to be playful. There’s really no better reason to sit down with a pen and a piece of paper. Why think you have to act all grown up just because you making up sentences, paragraphs, blog posts?

Don’t listen to anyone who tells you to stop playing with your words.