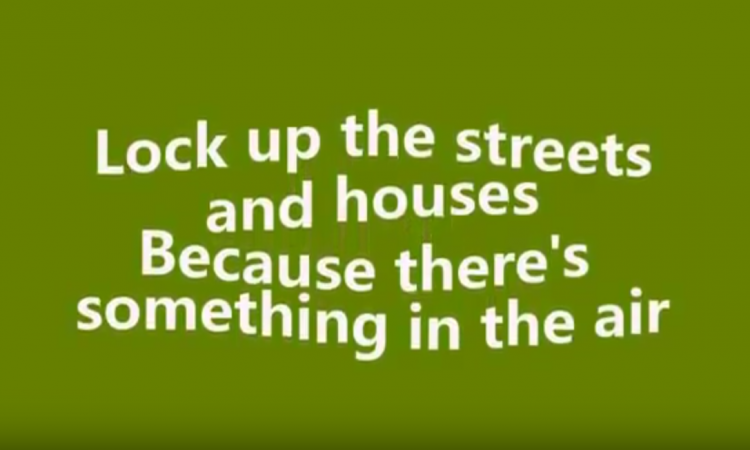 Air pollution in Leeds is worse than ever. PHIL KIRBY knows a song about that.

Fifty years ago Thunderclap Newman released a song called Something in the Air.

I caught myself humming the second verse as I walked along Stanningley Road on my way back from buying a couple of croissants and a banana at the local Lidl this morning, reading the dire warnings on Twitter about the air quality in Leeds.

The tweets were apocalyptic.

Why no message aimed at the people actually doing the polluting? The message should never, ever be stay indoors and don’t exercise, that’s tantamount to imprisoning people— Rational Dad (@TwoWheelsWood) February 27, 2019

I hardly dared draw breath. I wished Lidl stocked those face masks you see people wearing in Chinese cities, they would have gone down a storm today.

The air was so thick you could have spread the traffic fumes on toast. Campbell’s could have canned your every inhalation, the atmosphere was such a pea-souper. The sky pulsated with particulates and roiled in nitrogen dioxide as if the Devil was emptying his Hoover bag and ash trays down on LS12. A heavy blanket of ozone tucked tight around Armley made Canal Road a no go zone.

Climate change had gripped us by the throat.

The sun was shining, the sky was a faultless blue and the birds were singing (when you could hear them above the roar of continuous traffic.) Nobody driving by in their open topped convertibles even noticed there was a problem. Another “glorious” day as the radio weather bulletin cooed. Record breaking.

Because the problem is you can’t see air pollution. You can’t smell it or taste it or feel it dropping on your head or sense it wafting toward you from a quiet cul-de-sac. Air pollution doesn’t come with a Jaws theme tune. There’s no theatrics like a tornado or a tsunami or a moorland fire. It’s the cat burglar of climate change. Before you notice it your brain has disappeared and your lungs have gone south.

The only way you know it’s there is through sensors feeding data into apps like AIR QUALITY LEEDS (Live air quality report and air quality forecast in Leeds,) which you have to search for or get directed toward by social media. The app will warn you to take care doing outdoor sports, cycling, taking baby out, eating outside, and will inform you of the exact amounts of main pollutants (particulates, nitrogen dioxide, ozone) you’ll face going about your normal day to day routine. Not that the majority of us could could pick out a particulate from a hole in the ground even if our lives depended on it. All we know is that “CHRONIC EXPOSURE” has reached a higher than maximum limit for 24 hours established by the World Health Organisation, and that can’t be good news.

Public services, such as the Met Office and DEFRA, are recommended by the council.

The Met Office has updated today’s pollution forecast to ‘Moderate’ for Leeds, but currently forecasts ‘High’ levels of pollution tomorrow.

The previously shared health advice has been recommended by the government during episodes of ‘High’ air pollution. https://t.co/I6UEzhzRCF— Leeds Council News (@LeedsCC_News) February 27, 2019

They give out standard advice (basically don’t leave the house if you can help it), but the commercial air quality apps are more discriminating. They promise to enable you to avoid the worst exposure by providing personalised pollution tracking, for a price. If you can afford the £150 or so for the gadget then you can dodge the worst.

Of course, if you can afford a personal air quality tracker then you are probably the sort of person who drives into the city leaving a substantial contribution to the choking atmosphere, and then drives home again to the more breathable suburbs. You can afford to dump your pollutants in the less posh parts of town, dodge the toxic hotspots, then leave the less fortunate inhabitants to suck it up. The locals won’t even know.

Not sure about you but I’m not sure that’s the best use of technology.

And I’m not sure more monitoring is particularly useful.

Maybe it’s time, as Thunderclap Newman sang, to call out the instigators. We’ve got to get together sooner or later. There’s definitely something in the air.